The Canadian government has created yet another poorly conceived tool to further the interests of Canadian mining companies operating abroad – the Canadian International Institute for Extractive Industries and Development (CIIEID). In a presentation to the Mining Association of Canada in June 2013, former International Development Minister Julian Fantino promised industry representatives that the Institute “will be your biggest and best ambassador.”[1]

While mining-affected communities, their representative organizations, and governments could certainly benefit from independent academic expertise, the CIIEID will not provide independent advice. Nor will it have much credibility given the Canadian government’s vested interest, its stated goal of promoting and protecting the interests of Canadian extractive companies operating overseas, and its poor track record.

The CIIEID was established through a $24.6 million donation from the Canadian International Development Agency (CIDA), now part of the Department of Foreign Affairs, Trade and Development (DFATD). It was formally launched on January 29, 2014 as a partnership between the University of British Columbia (UBC), Simon Fraser University (SFU), and the École Polytechnique de Montreal.

The Institute’s purported mission is to work with national, regional, and local governments so that resource extraction will contribute to sustainable growth and poverty reduction. A contribution agreement was signed between UBC and CIDA in May 2013 for the establishment of the CIIEID.

The contribution agreement clearly illustrates why the Institute cannot meet its stated objectives when considered together with examples from CIDA’s past involvement in extractive industry governance in other countries.

The CIIEID will not meet its stated objectives for the following reasons:

1. CIIEID is not independent of the Government of Canada The Canadian government conceived of and funded the CIIEID.

The Contribution Agreement ensures Canadian government control over the Institute’s initial public statements. The Agreement states that the Institute “shall not make any initial public announcement, in Canada or overseas, relating to this Agreement, the Project, or to any of the information in the documents attached hereto without first providing CIDA sixty (60) days advance notice and obtaining CIDA’s written approval. In exceptional circumstances, CIDA may, at its sole discretion, consent to an advance notice period that is less than sixty (60) days.” And even after that, “All content directly related to the Project that will be used in any media activity must be approved by CIDA and will contain appropriate acknowledgements of the Contribution of both CIDA and the Organization.”[2]

2. CIIEID is not independent of Canadian extractive companies Canadian government funding for the CIIEID is for five years. In order to secure its future, the Institute will seek other sources of funding, including from the extractive industry. New Gold Inc. and the Association for Minerals Exploration of British Columbia have already provided cash contributions.

Industry will also be represented on the above-mentioned Advisory Council.

3. CIIEID will promote extractive industry growth, not poverty reduction Given that the start-up funding for the CIIEID from the Government of Canada is Offical Development Assistance (ODA), it must conform to Canada’s ODA Accountability Act.[4] This act stipulates that ODA must contribute to poverty reduction, take into account the perspectives of the poor, and be consistent with international human rights standards.

Nonetheless, consistent with the Canadian government’s overall shackling of ODA to Canadian private interests, the Contribution Agreement reveals that its programs will prioritize where Canadian investments are greatest. The top criterion that the Institute will use to determine its “Tier A” programs is “[s]ignificant presence of Canadian capital investment in the extractive sector in a CIDA country of focus or other significant bilateral relationship.”[5]

In November 2013, a “reconnaissance delegation”[6] from CIIEID visited Peru to explore challenges in the extractive sector. The Canadian Department of Foreign Affairs reported that the Canadian Embassy to Peru provided the delegation with input, contacts, and “hosted a Round Table for Canadian company key contacts to share perspectives on challenges, tools and resources, and expertise gaps.”[7] Other countries mentioned in the Contribution Agreement are: Uganda, Mali, South Africa, Brazil, Mexico, Ecuador, and Mongolia.

Rather than alleviate poverty, especially in countries that rely on the mining sector for growth, mining tends to deepen poverty and create long-term development deficits at national and local levels through damage to the environment and people’s health as well as loss of land-based livelihoods and social dislocation.[8] Better “governance” and better distribution and reinvestment of mining revenue are presented as a solution to this phenomenon, often referred to as the “resource curse”. But building up such governance can be prohibitively expensive[9] and diverts funds away from sectors that do reduce poverty. Furthermore, oil, gas and mining companies are increasingly resorting to provisions in free trade and investment protection agreements that prevent “host” governments from implementing measures that could otherwise ensure respect for community self-determination and wellbeing, environmental protection and good working conditions.

4. Canadian government involvement in natural resource governance overseas has a track record of privileging investment and profitability over reducing poverty and protecting communities, workers, and the environment

Honduras: Hondurans realized shortly after Goldcorp’s San Martín mine in the Siria Valley went into production around 2000 that their mining law, rushed through in the wake of Hurricane Mitch in 1998, provided no recourse for communities suffering negative impacts. As a result, they pressed for reforms to ban open-pit mining and the use of certain toxins in mine processing, and to give communities a decisive say early in the process over whether mining could take place or not on their lands. They made headway. In 2006, their government put a moratorium on new mining projects and by 2009, a draft law incorporating their demands was ready for debate. But this came to a halt with a military-backed coup in June 2009 – a coup, and systematic human rights violations against the coup resistance, that Canada failed to denounce and sanction. The mining bill was never debated.

Canadian authorities wasted no time after the 2009 elections – widely criticized as illegitimate – to lobby for a mining law to suit the industry and to lift the moratorium.[10] In 2012, as the culmination of a series of Canadian government efforts, CIDA sponsored a technical project to finalize the mining law, which passed in January 2013. The new law opens the gates to new mining projects in what is now the most violent country in the region and is a major setback compared to what Hondurans had been proposing.[11] Despite high levels of corruption among police and increasing military cooperation with police, the mining law establishes a 2% security tax on mining activities that will provide a direct incentive to security forces to protect corporate interests.

Colombia: CIDA financed a technical-assistance project to reform Colombia’s mining law in the mid 1990s.[12] These reforms were approved in 2001, in the context of a still-ongoing war in which rural, indigenous and afro-Colombian peoples are disproportionately represented among the millions of victims of forced displacement and systematic violence – especially in mineral-rich areas.[13] Developed with the support of lawyers who work closely with the mining industry, these reforms paved the way to dismantle the state mining company, criminalize the artisanal and small-scale mining sector, subordinate local land use plans to mining interests, and limit the role of environmental authorities.[14]

Another result of this policy is heightened insecurity and conflict, for example:

National mobilizations across Colombia in 2013 demonstrated growing opposition to industrial mining, with calls for mining concessions and contracts to be repealed from indigenous territory,[15] and the effective participation of communities and traditional and small-scale miners to be guaranteed in mining policy development.[16]

Peru: From 1998-2011, CIDA financed the Peru-Canada Mineral Resources Reform Project (PERCAN), a $17.7 million collaboration with the Peruvian Ministry of Energy and Mines that shared a similar objective to that of the CIIEID.[17] During this time, however, the mining sector became the principal source of social-environmental conflicts in the country, numbering over one hundred.

CIDA’s efforts, primarily directed as they have been at partnerships with mining companies and corporate self-regulation, led the North-South Institute and Lima-based Cooperacción to conclude that CIDA’s approaches in Peru “are in no way innovative and tend to repeat schemes that have not been successful.”[18] Among other badly-needed changes, Peruvian civil society organizations and networks have been calling for regional land use planning prioritizing sustainability; respect for the self-determination and right to free, prior and informed consent of Indigenous communities; and protection of water supplies.[19][20] 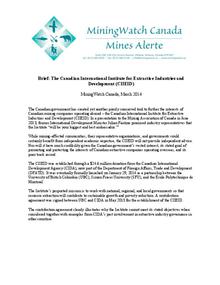