This report documents the current activities of the El Dorado Foundation, which was originally established by Pacific Rim Mining in El Salvador in 2005, and is now operated by its successor company, OceanaGold. The two companies have sought to develop a disputed gold mining project, which is currently stalled in the exploration phase, in the department of Cabañas in northeastern El Salvador. The project, which has not advanced in roughly ten years, is the subject of a controversial international arbitration process at the International Center for Settlement of Investment Disputes (ICSID) in Washington, D.C.

This report was produced in collaboration with the National Roundtable against Metal Mining in El Salvador and organizations in the department of Cabañas, El Salvador in response to their concerns about the Foundation's activities. A three-person research team was formed to investigate and write the report, including Stuart Kirsch (University of Michigan), an anthropologist with extensive research experience on mining conflicts; Jen Moore, Latin America Program Coordinator for MiningWatch Canada; and Jan Morrill, the former US/El Salvador Sister Cities Coordinator and former Coordinator of the International Allies against Metallic Mining in El Salvador.

The research and analysis presented in the report is based on a review of company reports, documents obtained from Salvadoran government ministries, and interviews. The research team spoke with local residents, current members and the former legal representative of the National Roundtable against Metal Mining, and government officials in Cabañas and San Salvador during visits to El Salvador in February and August 2015. Excerpts from interviews with local residents and organizations are presented anonymously given concerns about their personal safety. Attempts to speak with representatives of the Foundation El Dorado were unsuccessful. 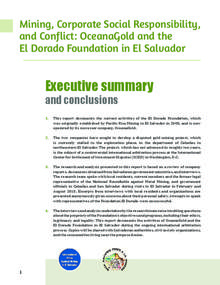