The “Energy Transition” promoted by capitalists is a clear greenwashing attempt, and does not represent a significant departure from what the world already knows as an inseparable relationship to the mining extractivist model. The example of lithium in Mexico is a case in point.

Despite statements being made about world lithium shortages, and its unparalleled importance for the “energy transition”, world lithium production fell by nearly 20% in 2019, and in the same year, despite this fact, the slow growth of lithium demand only met 75% of the total supply. A slowdown in the sale of electric vehicles (exacerbated by the removal of Chinese subsidies), as well as a reduction in the practice of stockpiling, among others, depressed production. Despite this, the primary sources of information for the industry, as well as the principal financial institutions, continue to insist that we are on the cusp of a lithium demand boom.

This is provoking growing lithium mining speculation in the Americas by junior mining companies. These companies, like in other mining rubrics, take over lands, generate unreal expectations and conflict, and provoke violence and displacement in the name of technologies that are supposedly “green” or “just”. Mexico is not an exception to this rule.

Currently in Mexico there are 36 lithium mining projects, all of which are financed by foreign capital and controlled by 10 companies. These 36 projects represent 97,000 hectares of mining concessions, and another 537,000 currently being revised. It is noteworthy that 84% of these concessions are under review and in process. Looking closely at the information available about these projects and companies, we note that they are majorly stalled and are controlled by tiny Canadian companies on the brink of bankruptcy. These companies depend on the speculative nature of the market in order to generate interest and thus resources from investors in the Canadian stock exchanges. There are only really three companies that are active in Mexico and are slowly advancing their projects in Mexico (Bacanora Lithium, Organimax and One World Lithium).

However, and despite the speculative promotion of lithium production in Mexico, there are geopolitical conditions that are important for considering the possible future for Mexico within the global lithium market. There is no doubt that Mexico’s productive future is immediately important for the U.S. and this is evidenced perhaps most recently in imposition of certain terms within the new multilateral agreements signed, as is the case of the CUSMA. This agreement, for example, has imposed measures to increase the consumption of lithium products extracted in North America. This fact, coupled with the fact that currently world lithium production is concentrated in Australia, South America, and Asia, puts more pressure on deposits in Mexico and Canada for companies that wish to supply the regional automotive industry. Lithium does not represent a pathway towards the “energy transition”; instead, it is a mere continuation of the use of new inputs when faced with the eventual exhaustion of others. For this reason, the same colonial and capitalist accumulation structures that the mining industry reproduces will be perpetuated through its promotion and development. 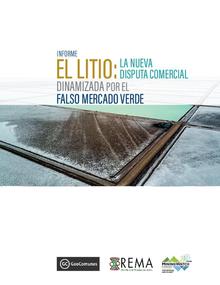