Economics & TaxationPrimer on Mining and the Environment 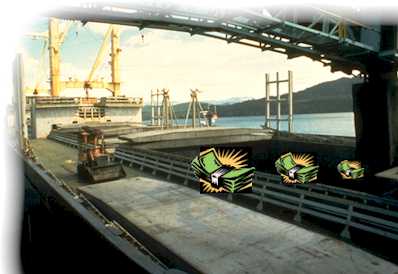 Canada is a major source of mineral investment worldwide. In 1996, Canadian mining companies raised over $7 billion for domestic and foreign mining projects on the Canadian securities markets. This figure represents almost 50% of the world's exploration dollars.

Mining companies are often divided into two groups: seniors and juniors. The "senior" Canadian companies (such as Teck, Placer Dome, Inco and Falconbridge) tend to be diversified corporations that handle most phases of mineral exploration and production. These companies are responsible for more than half of the industry revenue in Canada.

The role of smaller (junior) Canadian exploration companies has grown as part of the recent worldwide exploration expansion. Part of this trend can be traced to the downsizing of many of the major mine production companies in the 1980s and 1990s, and the concurrent expansion of opportunities for independent activity in developing nations. The boom of new small exploration companies was made possible by the surplus of skilled geologists and the speculative financing potential in the Canadian stock markets.

Junior companies outnumber senior companies by a ratio of 8:1. Many of these companies are either exploration or single mine operations. Although commodity price fluctuations can seriously affect the viability of these smaller company projects, exploration companies in particular are recognized as the most financially volatile and high risk part of the industry.

Due to the high financial risk associated with mineral exploration, junior mining companies typically are unable to raise exploration funds from banks and therefore rely heavily on equity investment, through either public financing or joint ventures with larger mine companies. This kind of highly speculative, short term (often tax driven) stock investment is well suited to financial markets such as the Vancouver Stock Exchange (VSE), but has also been on the increase in the more conservative mutual fund investors and Toronto Stock Exchange (TSE) due to the extremely high speculation profits gained through exploration discoveries in Voisey's Bay (Newfoundland), DiaMet (Northwest Territories), Arequipa (Peru).

In the wake of the Bre-X fraud, with the subsequent review of securities regulations and due diligence requirements, a more cautious investment market is expected. The Bre-X situation, however, is not an anomaly. Unethical trading deals and the financial volatility of many junior mining stocks over the last several years have underscored the recurrent problems with speculation and deception that are part of the history of financing mining activities in Canada. A common refrain important in understanding the mining industry is that "we don't mine rocks, we mine money."

The Vancouver Stock Exchange in particular has gained notoriety for its scandals over many years and, according to investment analysts, regulatory reviews and reforms have done little to curb either the volume or the corruption in that marketplace. The role of Canada as a leading mineral finance center is not expected to change significantly in the near future.

The relationship between financing mechanisms for mineral exploration and development, and the communities impacted by these activities has only recently begun to be examined. The growth of ethical investment funds, social investment research and shareholder activism has expanded in Canada over the last decade to the point where there are now over fifty brokers, several research organizations and an estimated 90,000 social investors, controlling an estimated $2.2 billion. As major user of venture capital the mineral industry has become a recent focus for attention in this field.

The last five yeas has seen a dramatic increase in the documentation and reporting of the socio-economic and environmental costs to this expanded mineral activity. In a variety of cases, mineral exploration and development by Canadian companies has resulted in the disruption of communities and aboriginal territories within Canada; similar cases have been reported in countries as diverse as Panama, Nicaragua, Venezuela, Indonesia, and Papua New Guinea.

From a community development and ecosystem health perspective it is significant that it is often smaller, less experienced companies that are the first point of contact between the industry and local communities. While in many cases exploration can be a benign activity, it is always a critical point of entry. As the leading edge of an expanding potential for intensive industrial development this commonly under-regulated segment of the mining industry can have a significant impact on remote communities.