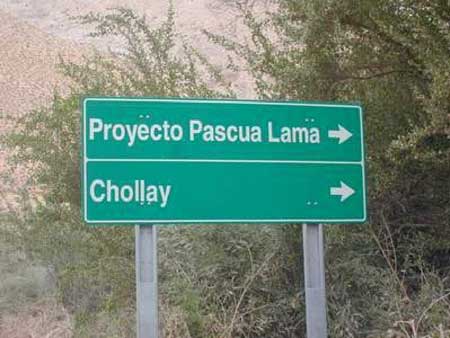 (Taken from “Exile of the Cóndor: Transnational Hegemony on the Border: the Mining Treaty Between Chile and Argentina” – Moon, Padilla and Alcayata, Santiago, 2004)

Pascua Lama is a mining project consisting of the open-pit exploitation of a deposit of gold, silver and copper ore and its processing to produce doré (gold and silver) and copper concentrate.

The deposit is located high in the Andes on the Chilean-Argentinean border, about 150 kilometres to the south-east of the city of Vallenar in the Commune of Alto del Carmen, Province of Huasco, III Region of Chile.

The nearest communities are Chollay and Las Breas, located 35 and 55 km away, respectively.

The project is bi-national in that it will have workings and operations in both Chilean and Argentine territory. In Argentina, the project is located about 300 km to the north-east of the city of San Juan, in the Department of Iglesia, Province of San Juan.

The operational area is established according to Additional Protocols 20 and 23 of the 16th Economic Complementarity Agreement of negotiated between Chile and Argentina within the framework of the 1980 Treaty of Montevideo.

A large part of the open pit will be in Chilean territory, as well as a waste rock dump, the processing plant, primary crusher, mine equipment maintenance complex, and powder magazine for the storage of explosives.

These facilities will be located in the headwaters of the Estrecho River, tributary of the Chollay River, at 4,400 metres above sea level.

In Argentine territory a smaller portion of the open pit will be built, along with a waste rock dump, a processing plant, a tailings pond, the construction camp (for 4,000 people) and operation camp (for 1,000 people), in addition to a private aerodrome.

The ore will be extracted of the mine at the rate of 15 million tons per year and sent to a primary crusher in Chilean territory, to reduce its size. Then it will be transported by means of a conveyor belt to processing facilities located in Argentine territory, crossing the border through a 2.7 km long tunnel.

In the processing plant the ore will undergo secondary crushing, milling, and washing operations.

The water requirement for the Pascua-Lama Project will be 370 l/s in total. This demand will be supplied from the Taguas River in Argentina.

Barrick is proposing to extract additional water in Chile for the operations of the mine and factories, with an estimated requirement of up to 42 l/s that will be taken from the Estrecho and Toro rivers. Barrick will have the corresponding utilisation rights under the legislation of each country.

There will be terrestrial access from both sides of the border. In Chile access will be from the city of Vallenar, via the road that connects Vallenar with the Alto del Carmen area, followed by a secondary road to be developed up the entire Carmen River valley.

The amount of the investment has been estimated to be 950 million dollars.

The Project has a productive life of 20 years according to the present reserve estimates, and it will produce 5,000 tons of copper in concentrates, 615,000 ounces of gold and 18.2 million ounces of silver annually.

In May of 2000, senior executives of the company announced that operation would begin in the 2003. This announcement and the presentation of a plan of work for Pascua-Lama were made before authorities of Region III, including among others the Intendant of Atacama, the Governor of Huasco, the Mayor of Vallenar, the Mayor of Alto del Carmen, the Mayor of Freirina, and SEREMI.

In recent years, the gold market has gone through significant oscillations, which has caused the beginning of the Pascua-Lama Project to be significantly delayed and its terms to be reframed. The fundamental problem is centred on the gradual and substantial increase of costs that the project has undergone, which has forced the company to make a detailed analysis in order to optimise the initial plan.

Logically, it is a matter of price fluctuations. In the recent past, the price of gold has experienced a significant fall and this continued for a certain period, so the company has had to change its priorities regarding projects and mediate profitability.

Nevertheless, senior executives of Barrick have indicated their conviction that the market will evolve favourably and the finalisation of Pascua Lama could be achieved in 2005.

Barrick’s plans are to develop the auriferous district of Pascua-Lama as a large operation that would begin its first stage with the exploitation of the high-yield oxides of the Veladero project.

The information available in the EIA only establishes that this will have an approximate surface area of 10 hectares and that “the sectors of glacier that will have to be removed will be determined with the appropriate lead time in accord with the updated mining plan.” There are no estimates of thickness or the equivalent in water.

The lack of relevant technical expertise in removing glaciers implies an irreversible environmental impact. What is certain is that the three affected glaciers would suffer an environmental impact. Nevertheless, there is no certainty whatsoever of what the impact would be on glaciers or permafrost (frozen rock or soil) from the road network and the associated stabilization measures that generally involves the use of salts.

With respect to the measures and actions that will be implemented for handling glaciers there are the following concerns:

• The “clearing” of ice or “pieces of glacier” will be done by bulldozer and front-end loader until the entire rock bed is uncovered. In this case, any mechanical action on the glacier will cause heat transfer, which will raise the temperature of the ice, and which in turn would be exacerbated by the high local insolation. Despite the fact that diurnal temperatures are low, the radiative balance includes more than caloric energy. There are no measurements of radiative energy but the albedo differences between ice and rock mean that the absorption of energy is greater in rock, which would expose the glacier even more.

• This also the case for controlled blasting and pushing the glaciers by the afore-mentioned means until their final disposition. In the case of blasting, this could elevate the temperature to thresholds of melting and evaporation which would further encourage destruction of the glacier.

• Removing the glacier to a similar level is not synonymous with conservation. The regional snow line, above which altitude snow accumulation is perennial, only contributes matter to a system that has tendency to lose mass naturally (through ablation). With an average annual precipitation of 216 mm (90% snow), the existence of glaciers in a semi-arid environment is due to the conservation of inherited relict paleoclimates. The regional snow line is at an altitude of 5000-6000 metres above mean sea level, meaning that snow accumulation is insignificant in terms of its contribution to the glacier, and can easily be less than the glacier’s equilibrium point. (Any accumulation in the system is the result of snow surviving through the spring of a hydrological year.) In the same way, there is no place with similar characteristics outside the influence of the project.

• The exclusive destination of the area post-removal, the use of low-slope sites, the adaptation of berms and machinery, not using creeks with thaw run-off, and the similarity of geologic and geomorphologic characteristics of surface formations – all have no relation whatever with the conservation of the glacier.

• Regarding the environmental viability of the glacier intervention, the proportion of the intervention (10 hectares) of the totality of the glaciated area and the reversibility and recoverability of the intervention must be emphasized since there is no information available on a management plan similar to that proposed. The specific report of “structure and glacier dynamics” must necessarily be expanded to include variables like recent flow, morphology, characteristics and variations, thickness, foliation, meteorological measurements,¬ and ablation. Only with an integrated analysis of these variables, and others that are considered pertinent, can a mass balance curve be projected to contrast with the intervention. There are questions arising as to how to reliably establish environmental viability. On the contrary, it is possible to suppose that the impact as a result of the removal will be irreversible and non-recoverable.

Finally, it is necessary to specify what is understood by compensation measures if the removal of the glacier means its disappearance. In this sense, if the glaciers disappear no compensation is possible in terms of maintaining baseline environmental quality previous to the project, since it is practically impossible to regenerate a glacier, or if it is, such a procedure is unknown.