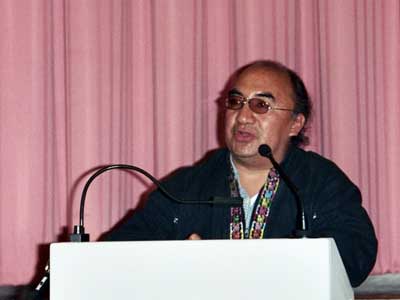 Technical experts were on hand to lead panel discussions and answer questions about the processes and impacts of hard-rock metallic, uranium, diamond and coal mining.

More than 50 people together traveled thousands of miles to attend the Edmonton Summit, from communities throughout Turtle Island. The Summit began with a Keynote Address by Andrea Carmen, the Executive Director of the International Indian Treaty Council entitled "Mining, Human Rights, and the Natural World Responsibilities of Indigenous Peoples". The keynote address was followed by a report from Guatemala by Francisco Cali Tzay, the Guatemala Representative to the United Nations Committee on the Elimination of Racial Discrimination on "Building North - South Solidarity to Defend Our Communities: A Report From Guatemala". (See photo.)

Panel topics throughout the next two days included workshops on the social, cultural, environmental and health impacts of coal, uranium, and hardrock mining, tribal consultation, mine closure and cleanup, U.S. and Canadian Mining Law and its impacts on Tribal lands and resources, communities facing new mine proposals and profiles in resistance, corporate engagement, acid mine drainage prediction and prevention, fundraising strategies, mercury and mining, success stories, as well as mine reclamation and reclamation bonding.

After sharing information, training, resources and knowledge, participants offered each other support in technical and legal knowledge and trainings, negotiating strategies, campaigning, media, and community outreach. The gathering divided into working groups around coal, uranium, and hardrock mining.

The North American Indigenous Mining Summit was organized and hosted by the Western Mining Action Network (WMAN) and the Indigenous Environmental Network (IEN). In the coming months and years, WMAN and IEN will take the energy and ideas generated at this gathering and develop workplans and strategies to follow-up on the needs identified.

Whereas, the Indigenous Peoples Caucus of the Western Mining Action Network was formed to strengthen our alliances and inherent responsibilities to protect Mother Earth from the destructive impacts of irresponsible mining, in particular uranium, hard rock and coal mining. The caucus is composed of representatives from across the northern region of Turtle Island (Canada and the United States). Together, our voices are united as one to advocate for the health, safety and welfare of our communities to the decision makers in governments and industry.

Whereas, the North American Indigenous Peoples Mining Summit was convened in the traditional territory of the Cree Nation (Edmonton, Alberta CA) July 27-July 30, 2005 to bring Indigenous Peoples together to share our traditional knowledge and understanding of western science as its relates to our individual community and collective concerns on mining practices, and;

Whereas, these Indigenous representatives from across Turtle Island registered numerous concerns on the hazardous impacts of irresponsible mining on the health, welfare and safety of our peoples, our communities, our lands and spiritual and cultural resources, and;

Whereas, there have been numerous violations of our inherent and human rights as Indigenous Peoples as given to us by the Creator both by the mining industry and governmental sectors, and;

Whereas, in order to protect these rights of all Indigenous Peoples and to safeguard against any future harms that threaten our physical and spiritual survival through the protection of Mother Earth and our natural world;

Therefore, be it resolved, we, as Indigenous representatives and organizations, hereby unite to discuss spiritual, cultural, social and environmental concerns that will not only directly impact Indigenous Peoples but impact the sustainability of all life and all peoples, globally and

Be it further resolved that, we as Indigenous representatives and organizations hereby unite to develop strategies and initiate immediate changes to educate and inform communities, the corporate world and government officials of the Indigenous worldview and that those harms caused by irresponsible mining affect the water, the air, the land and the overall sustainability of our earth and all life and these harms must be addressed and corrected immediately.