Support for Mining Over Democratic Principles in Papua New Guinea

The global mining industry uses high-risk mining practices and employs environmentally destructive mine waste disposal methods in Papua New Guinea (PNG) that are not tolerated in most other countries, including Canada. Canadian companies continue to severely affect major tropical rivers in PNG by using them as mine waste dumps. They have also dumped millions of tons of metal and chemical laden mine waste into PNG’s seas, and now, Nautilus Minerals out of Toronto plans to mine massive underwater sulphide deposits in the rich biologically diverse territorial waters of PNG. This will be a global first. In the face of serious environmental and social impacts from mining, indigenous landowners are starting to fight back to protect values of importance to them. Rather than uphold their democratic and human rights, the financially strapped PNG government has been lashing out at its own citizens who are relying on basic democratic principles and legal means to protect their resources and livelihoods.

In November of 2008, Catherine Coumans travelled to Papua New Guinea to participate in a review of the preliminary findings by the Scottish Association for Marine Science (SAMS) charged with undertaking an independent evaluation of Submarine Tailings Disposal (STD), also called Deep-Sea Tailings Placement (DSTP). SAMS’ research was part of a collaborative initiative between the European Union and Papua New Guinea’s Mining Sector Support Programme. SAMS’ final report – completed but not made public by the Government of Papua New Guinea – was leaked this year to the media (the report is available online). Its findings leave little doubt as to the under-reported environmental risks associated with DSTP: it confirms negative impacts to marine environments in Papua New Guinea from existing and closed mines using STD including Barrick Gold’s (now closed) Misima mine.

The leaked report arrived at a propitious time. On March 19, 2010 Lawyer Tiffany Nonggorr, counsel for Rai Coast indigenous landowners in a suit against Ramu NiCo Management (MCC) Ltd. et al. was successful in getting an interim injunction to stop the unpermitted blasting of corals to lay pipe for an STD system off the coast of Madang. The controversial STD system is part of the proposed Ramu nickel mine (Chinese owned). In support of a court case by the Rai Coast landowners against the use of STD at the mine, Catherine Coumans provided a sworn affidavit that entered MiningWatch’s STD Toolkit into evidence, as well as her statement that STD is effectively banned in Canada. The leaked SAMS report would have strengthened the landowners’ pending lawsuit – had not the Papua New Guinea legislature hurried into law a bill that is unprecedented in its intent and scope. 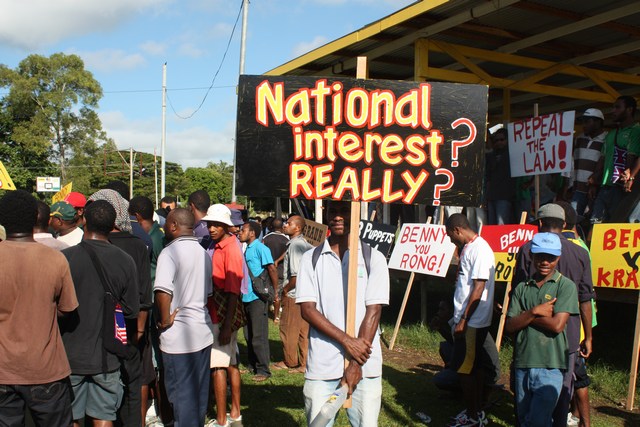 On May 28th the PNG legislature amended sections of the country’s Environment Act to, among other things, authorize the Secretary of the Department of Environment to exempt project developers from liability for environmental harm and damage to citizens. This effectively quashes the rights of landowners and other interested parties to sue for compensation for environmental harm, or to obtain an injunction to prevent environmental and personal harm. On June 9th Prime Minister Michael Somare defended his new law by saying that the ‘law had been passed to ensure that the project [Ramu nickel mine] achieved its targeted deadline without unnecessary delay.” (The National, June 9, 2010, p. 40) The chairman of Transparency International in PNG is reported as saying that the changes to the environmental laws were a “clear sign that parliament had become a rubber stamp for vested interests and those with money.” (The National, June 9, 2010, p.7)

The rushed amendments have led to an unprecedented and sustained outcry in the media in PNG and have made the news in New Zealand, Australia and the U.K. In response, Papua New Guinea’s attorney-general is reported as ordering people to stop talking about the controversial amendments to the environmental laws. “Attorney-general Ano Pala says people should now stop discussing the issue or they could be in contempt of court. In a statement he says there will be no more talk-back radio or letters to the editor on the issue. He says police should also prevent any demonstrations.” (ABC News, Liam Fox, June 25, 2010) On July 26, 2010 the organizer of a protest march against the Environment Act amendments received a regretful letter from the Superintendant Provincial Police Commander of Madang informing him that, contrary to earlier communications, the march could not go ahead. The commander notes that although “[p]olice in Madang have shown keen interest in your cause... I have been advised that all form of public debate, protest or so forth will be deemed as Sub-Judicial and anyone found to be spearheading this will be found to be interfering with due process, which may lead to Contempt of Court.” The demonstration against the amendments to the Environment Act went ahead on June 30th, as planned.

This year, as in the past two years, a delegation of indigenous Ipili from the area of Barrick Gold’s Porgera Joint Venture mine in the highlands of Papua New Guinea travelled to the US and Canada in April and May to raise awareness of the environmental and human rights issues they are facing as a result of the mine’s activities. This year’s delegation was made up of Jethro Tulin and Jeffery Simon of the grass-roots human rights group Akali Tange Association and Mark Ekepa and Anga Atalu of the Porgera Landowners Association. Mark Ekepa is the Chairman of the landowners’ group, which represents the interests of the traditional landowners living inside the mine’s special mine lease area. MiningWatch supported the visit to Canada and helped facilitate meetings in Toronto and Ottawa.

As in past years, the delegation attended and spoke at the annual U.N. Permanent Forum on Indigenous Issues and attended and spoke at Barrick’s Annual General Meeting. They met with federal members of Parliament, civil servants from a number of departments, civil society organizations and the media. They also met with Barrick officials Patrick Garver (Senior Vice-President and General Counsel) and Peter Sinclair (Director, Corporate Social Responsibility). Their visit and message was well-covered in the Canadian media. Over the past few years the issues and allegations that the Ipili of Porgera have been raising in Canada have been corroborated by, among others, the Norwegian national pension fund, Amnesty International, and testimony before a Canadian parliamentary committee (for more information see our web site).

This year, after the delegation returned home to PNG, they were surprised by an angry response to their visit to Canada by their Member of Parliament Philip Kikala and PNG Foreign Affairs Minister Sam Abal. PNG media reported that “Papua New Guinea will send a protest note to Canada for encroaching on its sovereignty by entertaining a group of Porgera landowners at parliamentary level.” (Sunday Chronicles, May 23, 2010, p. 20) Minister Abal is reported as saying “We will make our views known to Canada.” MP Kikala reportedly added that “Papua New Guineans who are spreading false information should also be prosecuted.” Abal and Kikala also targeted NGOs entering PNG. Abal is reported to have said that “the activities of some NGOs entering PNG need to be carefully screened because they come only to make a name for themselves and sell their own cause.” Kikala is reported as saying that information gathered by foreign NGOs “are (sic) likely to call into question PNG’s integrity and threaten its sovereignty.”

Porgera landowners from the highlands are now reaching out to landowners on the coast to support their struggle against ocean dumping of mine wastes and to protest the unprecedented amendments to the Environment Act.