Since the June 28, 2009, military coup in Honduras, Rights Action has supported and worked with the Honduran people's pro-democracy, anti-coup regime movement.  This widespread people's movement is unique in Honduran history and is one more inspiring 'struggle of the Americas', as people work to end the impunity of and exploitation by minority elites, and to re-found their nations and societies by establishing real democracy and rule of law from below.

Since military ouster of the government of President Zelaya, and 15 months a widespread repression, we have also denounced how and why the governments of the USA and Canada have been the main supporters and backers of the coup itself and, since then, the post-coup regime of "President" Pepe Lobo.

A direct way of understanding why Canada has thrown democracy and human rights down the toilet is to view Honduras through the lens of Canadian mining interests. 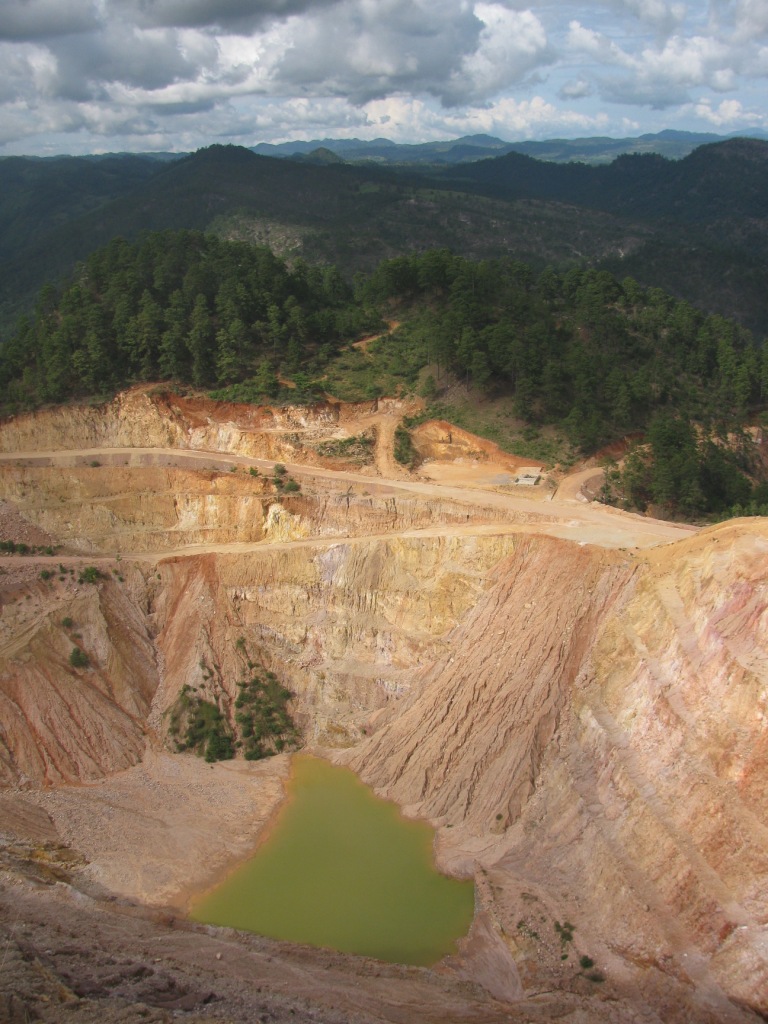 Canada is proceeding with "business as usual" in Honduras, even as Canadian government officials and politicians receive - from Rights Action and many other groups - a steady stream of reports on on-going State-sponsored repression in Honduras. Repression is being widely used to keep in place an undemocratic regime and an unjust economic model that favours global investors and corporate interests, such as the mining industry.

In August, Karen Spring visited the San Andres mine in Honduras owned by Aura. Standing at the edge of a huge 250 metre-deep crater left behind by 3 Canadian mining companies, one gets a glimpse of the serious harms and destruction that the San Andres mine has caused, and continues to cause in the municipality of La Unión, department of Santa Rosa de Copan, Honduras.

The mining-harmed communities of the La Union municipality claim that along with selling the mine from one company to another, the companies pass the problems along that they created, in order to avoid being held criminally and/or civilly accountable.

Harms and violations documented over the years include: environmental contamination from cyanide spills and related health harms, forced relocations, unfulfilled promises to the communities, disappearing villages and on-going social tensions between community members.

In the region around the mine, four communities are directly affected by Aura Minerals operations. 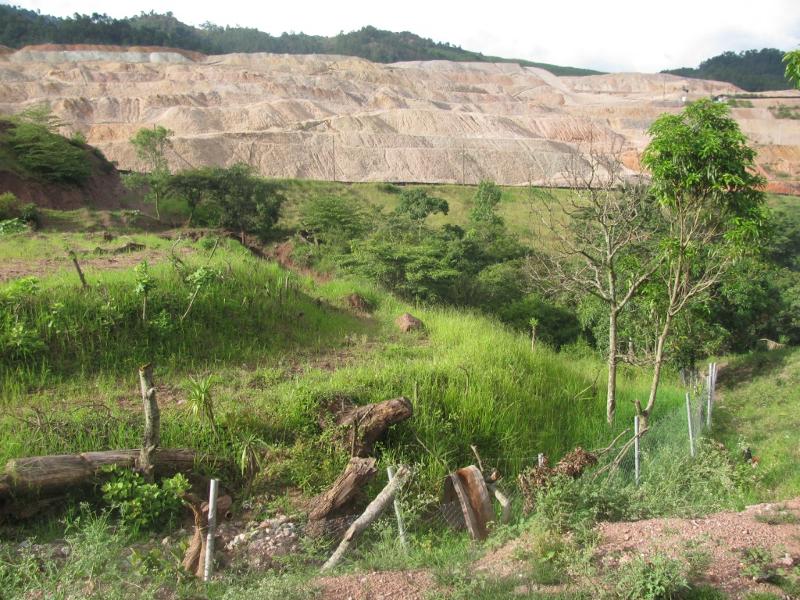 Although roughly 40 houses are still inhabited in San Miguel, the community looks like a ghost town where several run-down and destroyed houses show the slow disappearance of a once fully inhabited community. 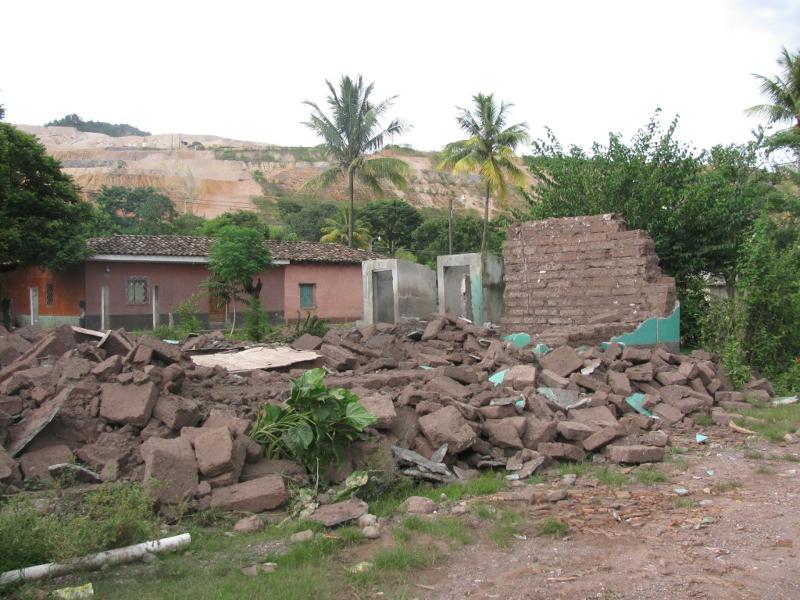 It is believed that instead of relocating and compensating the people of San Miguel, first Greenstone Resources, then Yamana Gold decided to slowly buy the houses forcing the people to relocate, in hopes of saving money.

The members of the community of San Andres that were relocated by Greenstone Resources in 1994 are still awaiting land settlements and compensation that was promised to them as a condition of their relocation. Their legitimate claims continue to be pushed aside by Aura Minerals.

During the relocation from the 'Old' San Andres to the 'New' San Andres, the community was forced to leave behind their deceased love ones in a cemetery that is still being used by the nearby community of Azacualpa. 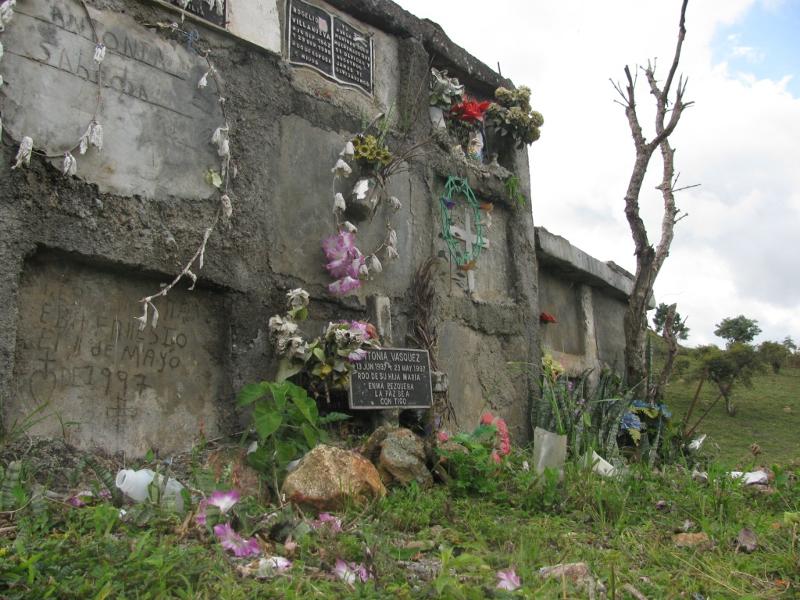 This cemetery, the resting place of hundreds of years of family and community history, is now under threat by Aura Minerals that wants to destroy the cemetery in order to access the gold and silver buried in the mountain where the community's family and loved ones are laid to rest.

When visiting the cemetery with community members from the 'New' San Andres, one elderly woman pointed to an unmarked spot on the ground and told me that her grandson was buried there. She also mentioned that people still visit their loved ones there frequently, which was obvious from the presence of fresh flowers on some of the gravesites.

Reports from the same community say that the company has already entered the cemetery to remove gravestones and markers, which act as a hindrance to the company's desire to expand.

CONTAMINATION REMINISCENT OF GOLDCORP'S MINE

The San Andres mine consists of 5 cyanide treatment ponds and one so-called "over-flow" pond. It is obvious what is held in these treatment ponds as one gets close and unwillingly sucks in the smell of strong toxic chemicals or cyanide solution used to separate the gold from the rock. 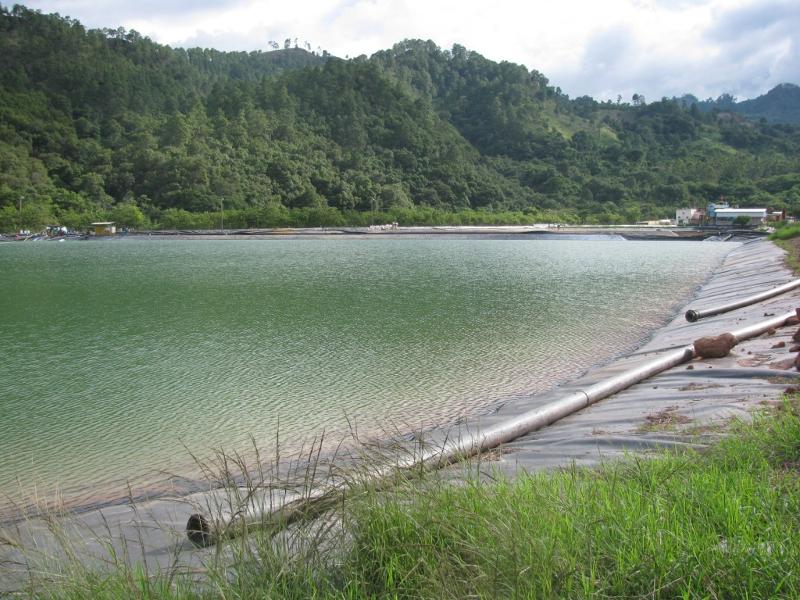 All 6 ponds are dangerously located by the banks of the Lara River which runs into the larger Higuito River that provides water for the city of Santa Rosa de Copan, some 47 kilometres from the mining operations.

Similar to Goldcorp's practices at the "San Martin" mine in Siria Valley, pipes submerged in the cyanide solution run from the pond, under the dirt road that separates them and appear on the downhill banks leading to the Lara River. But their on-going discharges into the river are not the only chemical dumping that occurs.

On two occasions, cyanide spills have occurred in the San Andres mine. One in January 2003, under Greenstone Resources and second in March 2009, months before Yamana Gold sold the operation to Aura Minerals Inc.

In both spills, community members founds thousands of dead fish, killed from the toxic chemicals which will remain in the water and land years after the mine shuts down.

Given the utter lack of democracy and rule of law in Honduras and the widespread repression and corruption, it is not surprising that communities harmed by mining - Aura Mineral's San Andres mine or Goldcorp's San Martin mine - have no recourse in their own country, beyond very risky community organizing, education and denunciation work that Rights Action, and other international solidarity and human rights groups, are doing our best to support.

Yet, if pressure is not brought to bear in Canada on government policy makers, investors (such as the CPP), and company shareholders, then Canadian mining companies will continue to operate their profitable and harmful mines with impunity.

DON'T STOP WRITING TO YOUR OWN POLITICIANS & GOVERNMENT OFFICIALS