Crossroads on the Tundra: Baker Lake struggles under pressure to allow uranium mining 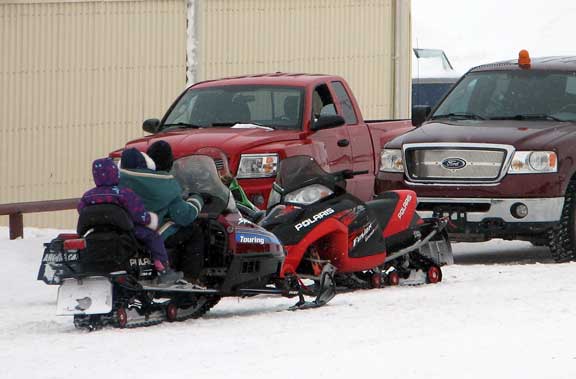 Baker Lake, Nunavut, is the geographic centre of Canada, but it’s rarely the centre of attention for most Canadians. And yet what’s going on here is nothing less than a test of democracy in Canada’s newest territory. A huge complex of uranium mines is being proposed for the tundra west of Baker Lake, in the middle of important caribou habitat.

The community faces a stark choice: allow the mine to proceed in return for jobs, business opportunities, and royalties — or protect the long-term well-being of the wildlife, the ecosystem, and the community. The choice is made more stark by the fact that relatively little has been done to create other economic opportunities for one of the country’s poorest communities. It’s also made more complicated by the fact that there are other mines being proposed for other metals, and one, the Meadowbank gold mine, is already in operation.

It’s early spring, and the warming air carries the scent of the sewage truck as it makes its morning rounds. The roads are busy with snowmobiles, ATVs, and vehicles. Thanks to the Meadowbank mine there are a lot of new snowmobiles and trucks and even a Hummer — I’m told there are actually three in town, though there’s only a few kilometres of road. The Meadowbank mine provided a lot of work over the past couple of years, though that’s tapering off now that the construction phase is over and the mine needs skills and education levels that local Inuit can’t offer. The uranium controversy goes back decades. It was uranium exploration, and its impacts on the live-giving caribou herds, that helped start the whole land claims process for Inuit in what eventually became Nunavut. In Baker Lake, a proposed uranium mine called “Kiggavik” became the centre of controversy in the late 1980s and it was withdrawn from the environmental assessment process in 1990 after the community voted 90 per cent against uranium mining.

In the evening, elders and community members gathered in the Qamanituaq Recreation Centre recall this history. Many of them still feel the same way. But since Areva, the French government’s nuclear power arm, bought the Kiggavik property and set up an office here to anchor a massive public relations effort, more people have come to see the project as inevitable, its offer of jobs and prosperity as more compelling, and the regulatory system as competent and capable of protecting the land, water, and wildlife.

People have gathered to participate in a public forum convened by the Government of Nunavut (GN) as part of a review of the Territory’s uranium policy. The policy review was announced in response to pressure from Nunavut’s only non-governmental environmental organization, Nunavummiut Makitagunarningit (Makita for short) for a public inquiry into the issue. Instead, there will be three of these public forums, and people can call or send in their thoughts directly as well. The GN has set up a web site for this purpose and has commissioned a background paper from industry consultants Golder Associates to help inform people’s thinking. Unfortunately, and perhaps not unexpectedly, the background document is less than forceful -- and less than honest -- in presenting the dangers of ionizing radiation and the environmental and socio-economic impacts of uranium mining.

The hall is quite full; about 150 people have come out to listen to brief presentations from a panel of experts — all pro-uranium except for the two Makita reps — and ask questions or make comments. The interventions cover everything from the effect of the Meadowbank mine road on the caribou to mining royalties to job training. People talk about how the elders who were most attached to the land and the traditional way of life and had been the staunchest opponents of the Kiggavik proposal 21 years ago are dead now, and how people need jobs more than ever. Others talk about how crucial the lands and waters are to their well-being; the places themselves are important, where their family members are buried, but so are the animals and fish that people need for food and skins for clothing. “People are worth more than things, more than money,” as one woman put it. “Why are you not investing in other development?”

Some people clearly have strong positions for or against, while others are much more undecided. The one thing there seems to be consensus on is that they have not had access to independent information: all the information they have gotten has been through the mining companies, and they would like to be better informed. At the same time, the voice of the younger people doesn’t seem to be heard, even though much of the support for uranium mining is couched in concern for their future. Most of the people at the forum are middle-aged or older. It’s humbling to be in the same room as so many people who with such a depth of experience, but at the same time, as one of the few youth who spoke said, “You need to go to the youth if you want to hear from them.”

A lot of the discussion focuses on the Kiggavik proposal, now comprising a handful of open-pit and underground mines, a mill, waste rock disposal sites, as well as power, road, and port facilities. The project is currently in the early stages of an environmental review by the Nunavut Impact Review Board or NIRB. Without any documents available in Inuktitut it is impossible for the elders and hunters who have the most to say about the project’s impact to participate in more than a peripheral way. Last week when the NIRB held a workshop in Baker Lake, 25 of the 26 people participating at the table were Qallunat, or non-Inuit. The Inuit sat on the side, listening to the Inuktitut interpretation. One participant commented that it was just like the old days, as if the Nunavut land claim and the new territory had never happened. There have already been a lot of objections to the way the NIRB review is being carried out. Not only is the material not being made available in Inuktitut, but only a small portion of the funding requested by intervenors was actually allocated by the federal government, and sufficient time has not been allowed for intervenors to do their work. The cumulative impacts of past and future activity in the area will not be fully addressed, as the scope of the review is limited to projects that have already been identified. This is especially problematic since the Kiggavik project’s infrastructure would create a base for perhaps dozens of other mines in the area, effectively opening the entire lower Thelon River basin to development. Perhaps even more importantly, the NIRB has refused to evaluate the ability and capacity of the various regulatory and monitoring agencies to deal with a project of this magnitude and complexity when it is clear that all of them, whether territorial or federal, are facing severe challenges.

Both the NIRB review of the proposed project and the GN policy review hinge in large part on the attitude of Nunavut Tunngavik Incorporated, or NTI. NTI represents the Inuit of Nunavut and actually owns much of the Kiggavik deposits and many others, through the regional Inuit associations. Until NTI created a policy to allow uranium mining (with some fine-sounding conditions attached), no uranium exploration or mining would have been allowed under the terms of the regional land use plan. The regional land use plan was amended in 2007 in a secretive and heavily criticised process to allow uranium mining to proceed. Confronted by the contradictions of allowing the Kiggavik project to go ahead, and possibly dozens of other such projects in the same area, NTI is now reviewing its own policy. The NTI board of directors has not yet announced what form this will take.

The Inuit gathered in the recreation centre aren’t really concerned with the interaction of these three simultaneous processes. They would like to get better answers than they can get in one evening, especially when there are no public health or wildlife specialists on the panel, and the radiation and environmental specialists are industry consultants. A local (pro-uranium) politician says, “I just want the relevant facts for the people.”

A recurrent complaint is that for all the meetings and presentations and workshops and open houses they attend, people have no idea if anyone is actually listening to them. Policies and projects are developed somewhere else, and there is no obvious reflection of people’s ideas and criticisms. Perhaps through the efforts of Makita and some conscientious Inuit and Territorial leaders this can change. Perhaps the people of Nunavut, Inuit and Qallunat alike, will be allowed to look at the unvarnished reality of uranium mining and the global nuclear machine.

Note: This piece was originally published by rabble.ca. MiningWatch was invited to participate in the Government of Nunavut uranium forums on behalf of Nunavummiut Makitagunarningit.