Local Votes and Mining in the Americas

Community consultations, or consultas, have become an important part of the struggle to demand the right to decide for mining-affected communities. In Peru, Guatemala, Argentina, Colombia, Mexico, Ecuador, and now in Canada, these non-violent and democratic local votes are one way that indigenous and non-indigenous communities have succeeded in bringing this right for mining-affected communities to the forefront. They have also played an important role in local struggles, helping to unite communities in the face of often tense and sometimes violent conflicts, leading to political gains and helping to strengthen their voice against powerful national and international interests.

From Mexico to Argentina close to 70 such plebiscites have been held in the last nine years. Guatemala alone has seen more than 60 local votes on mines and dams as of July 2011, with an estimated 700,000 people voting against metal mining in their communities. 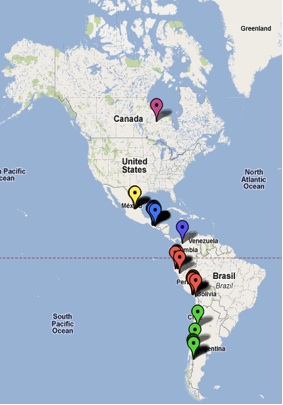 The first consulta took place in Tambogrande, Peru in 2002. It emerged as an effort to find a peaceful solution to a conflict over Vancouver-based Manhattan Minerals’ proposed gold mine, which was tearing at the social fabric of the community.

Since Manhattan Minerals began exploration in 1999, many local residents, largely dependent on production of limes and mangos for export, had rejected the company’s project. They believed that it posed a threat to the local water supply and rich agricultural lands near the town. [1] The mine would have also displaced nearly half the town’s population, some 8,000 residents. [2] The conflict had grown exceedingly tense particularly following a demonstration in late February 2001 that degenerated into a confrontation with some 300 police that had been posted to protect the company’s installations, which left a number of demonstrators and police injured, and many facing charges. [3] The murder of community leader Godofredo Garcia Baca on March 31, 2001 further aggravated tensions. [4] Garcia Baca was a highly respected environmentalist and identifiable leader of the local opposition to gold mining. A lone gunman shot him to death when his car was stopped on the side of the road. Despite strong local opposition, the company continued to move ahead with its project, enjoying the support of state and government representatives, even that of the town’s mayor. [5]

Tambogrande’s Defence Front recognized that it was running out of options and that the next step in this conflict would be militarization and greater repression of dissent. Seeing no other option, the Defence Front came up with the idea for a local vote based upon a provision in Peru's municipal code that allows for non-binding referendum to be held on issues of local importance. [6] Despite its non-binding character and with modest funding from OXFAM UK, a vote was held in June of 2002. 73% of eligible voters participated with 98% voting against the mine. The Peruvian government and Manhattan Minerals refused to recognize the results of the vote and a smear campaign was launched to attempt to invalidate the process and insist that the project continue. [7] Nonetheless, a few months later, the results of the vote also helped catapult the leader of the Defence Front to become mayor of Tambogrande and in 2003, the government canceled the project on the grounds that the company had failed to meet “essential criteria” necessary for proceeding with development. [8]

The success of Tambogrande's consulta has inspired dozens of other communities to put their concerns over mining to a vote. From Mexico to Argentina close to 70 such plebiscites have been held in the last nine years. Guatemala alone has seen more than 60 local votes on mines and dams as of July 2011, with an estimated 700,000 people voting against metal mining in their communities. Votes have been held to demonstrate community opposition to particular projects, as well as preemptively before any mining exploration begins.

The first consulta to take place in Guatemala was in the northwestern highlands, in the department of San Marcos, in the municipality of Sipakapa. Concerns over Goldcorp’s Marlin mine, then in the hands of Glamis Gold, had arisen in 2003 as the mine went into construction, and local communities who were never consulted about the project started to inform themselves. They had been told that prospectors were interested in orchids, not silver and gold. According to one observer, the idea to organize the referendum arose when a film about Tambogrande's vote was shown during a series of informational meetings about the impacts of mining. 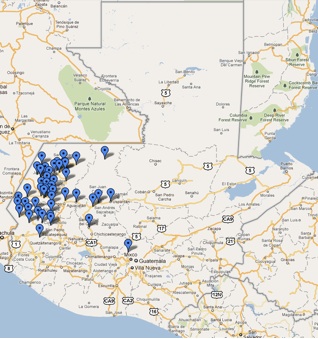 The municipality of Sipakapa prepared for their consulta in the context of growing conflict.  In early 2005, during a 40-day blockade against the potential environmental impacts of the mine, hundreds of protesters engaged in a stand off with an estimated 700 Guatemalan military and 300 police. One resident was killed and 10, including police, were injured. [9] In March of the same year, a villager was shot dead by an off-duty security guard employed at the mine.

Then, in June 2005, international and national observers watched as 13 indigenous communities in Sipakapa voted yes or no to mining on Sipakapense territory. Basing their process upon local, national and international laws, including the International Labour Organization’s Convention 169, which Guatemala ratified in 1996, the act was an assertion of their right to self-determination. The result was an overwhelming “no” to mining, as 98% of participants voted against the project. [10] In total, eleven communities opposed the project, one community voted in favour, and one abstained.

Both the company and the Ministry of Energy and Mines tried to get injunctions against the referendum, to stop the vote from taking place. But ultimately the results were tested in court and in May 2007, the people of Sipakapa won a significant battle. The Constitutional Court ruled that the vote was legal and that it “constituted an important mechanism of expression for the populace.” The Court also found, however, that the vote was not binding within Guatemalan law, reinforcing the state’s jurisdiction over mineral resources and the notion of mining as a matter of national, rather than local, concern. The vote, however, was an undeniable step forward in the local struggle for indigenous autonomy and ultimately toward the pluralization of national politics.

Since then, international human rights bodies and independent studies have found evidence of water and health impacts, as well as widespread human rights abuses, including lack of consultation or processes leading to consent, regarding the Marlin mine. These culminated in the Inter American Commission on Human Rights [11] and the International Labour Organization Committee of Experts making recommendations to the Guatemalan government in 2010 for the suspension of the mine. [12] Following a visit to Guatemala in 2010, UN Special Relator on the situation of human rights and fundamental freedoms of indigenous peoples James Anaya also reaffirmed the collective rights of local communities when he stated: “Projects that have a significant impact on the rights of indigenous peoples, such as the Marlin mine, should not take place without the consent of affected communities.”

Beyond Guatemala, indigenous and non-indigenous communities in Latin America have continued using local votes to protect their water supply, agricultural activities, ways of life, and environment on which they depend. Their efforts have been important stepping-stones to other gains.

In Esquel, Argentina, the efforts of farmers and employees of the tourism industry led to hold a vote over US-Canadian Meridian Gold’s proposed open-pit mine, which they opposed in favour of tourism and alternative investments. [13] Voter turnout at the 2003 referendum was 75%, in which 81% of the voters rejected the proposed mine. [14] Building on their success, in 2007 the Court upheld a provincial law banning open pit mining in the province of Chubut [15] and Meridian said they would not pursue their project. [16] Similar to Sipacapa, the referendum in Esquel inspired other similar actions in multiple communities in Argentina where conflicts between communities and mining companies have arisen.

In 2009 in Colombia, 1500 indigenous Afro-colombian people held a referendum regarding Muriel Mining Corporation’s Mandé Norte project. [17] Faced with militarization and intimidation, a manipulative consultation process, the desecration of holy sites, and severe impacts on the environment and human health, the ancestral inhabitants of Murindó and Jiguamiandó held a people’s consulta to voice their concerns. Following, in a landmark legal decision, the Supreme Court of Colombia suspended Muriel Mining’s operations until the company could obtain the free, prior and informed consent of affected communities. [18] As of April 2011, however, Vancouver-based Sunward Resources Ltd acquired Muriel Mining Corporation with intentions to continue to the project, and the national government had yet to implement the court's decision. [19]

In 2011, a local vote was also held in Canada on Kitchenuhmaykoosib Inninuwug (KI) territory, in a remote area of northern Ontario. In previous years, the Oji-Cree nation blocked junior mining company Platinex from conducting exploration activities near the shores of Big Trout Lake - the core of their territory. [20] The referendum took place following years of intimidation and criminalization over the Platinex dispute, including the arrest of six community leaders for their opposition to the potential impacts of the mine. During the recent referendum, 96% of voters agreed to consultation protocol for negotiating with companies and provincial and national governments, and approved a Watershed Declaration that outlaws industrial development in the entire Big Trout Lake Watershed area.

Local votes are organized based upon diverse bodies of law, from the local to the international. Internationally, ensuring mining-affected communities have a decisive say over projects - before they go ahead - is increasingly becoming recognized as necessary.

In 2002 and 2003, while residents of Tambogrande and Esquel were going to the polls, the World Bank Group (WBG) was preparing the results of an independent review of its role in the extractives industry. The review concluded that drastic reforms were needed if its work in this sector was to remain compatible with its stated goals of poverty reduction and sustainable development. Among other recommendations, the review recommended that in order “to ensure that local communities receive benefits from extractive industry projects, the WBG should: require companies to engage in consent processes with communities and groups directly affected by projects in order to obtain their free, prior and informed consent. [21] The WBG did not implement this recommendation, but collective rights are still gaining ground.

One such example is the 2007 passage of the United Nations Declaration on the Rights of Indigenous Peoples by the UN General Assembly, which was adopted by an impressive 144 member states, with the notable exception of Canada, the Unites States, Australia and New Zealand. The International Financial Corporation, a branch of the World Bank, also recently adopted FPIC within its performance standards, and the OAS Inter-American Court of Human Rights’ set an important precedent with its decision in favour of the people of Saramaka, Surinam, coupled with recommendations from the Inter-American Commission on Human Rights to the states of Guatemala and Brazil to uphold the rights of mine and dam-affected communities, including to adequate consultation and consent.

In the face of national and local contexts, however, where the will and legal mechanisms to protect collective rights are often weak, local votes seem sure to continue as a tool in defense of collective rights and the interests of current and future generations. These processes can help unite communities and may also help them to make political gains locally. They also present a significant challenge to the imposition of foreign interests and national sovereignty, without adequate consultation or consent, over their lands and lives. In a country such as Guatemala, where local votes have proliferated in both defensive and preemptive ways, they also represent a move towards greater indigenous autonomy and plurality in national politics. Most recently, a lawsuit has been admitted to the constitutional court contesting the 1997 Mining Law for lack of consultation with indigenous organizations in Guatemala. [22] Furthermore, for indigenous and non-indigenous alike, they are an important, non-violent assertion of political and economic rights that question who has a say given that the long term costs of industrial developments are most acute at the local level.