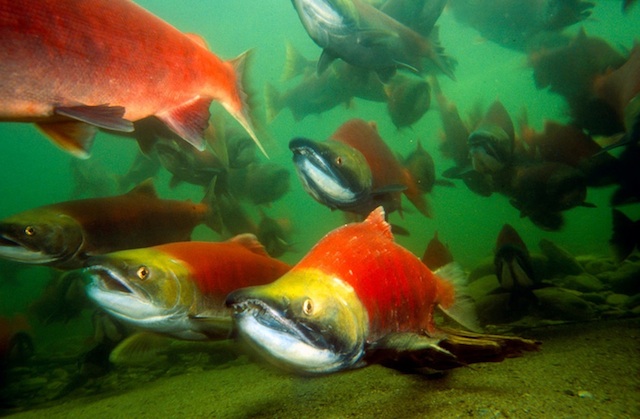 The Thompson River flows into the Fraser River west of Kamloops, B.C. and provides important spawning grounds and migratory routes for a number of salmon stocks. The Adams River is a tributary of the South Thompson and is home to one of the most important sockeye runs in the Fraser River system. Roderick Haig-Brown Provincial Park on the lower Adams River has been recognized by the International Union for the Conservation of Nature (IUCN) as one of the world’s greatest natural areas. Chinook, coho, sockeye, and pink salmon also spawn in the Adams River. Of course the Secwepemc who have sustained themselves from the river and the land around it have recognised its importance for thousands of years.

The Thompson River watershed already hosts Canada’s largest copper mine – Teck’s open pit Highland Valley mine. The New Afton mine is in construction, the Harper Creek and Ajax mine projects are in the environmental assessment process, and the Ruddock Creek Project is in advanced exploration. If all these projects go ahead the Thompson could go from having one operating mine to five within its watershed. The Ruddock Creek project is of particular concern as it is in the headwaters of the Adams River, is surrounded by sensitive protected areas, and is an important area for the Secwepemc indigenous economy. Over the last three years members of the Secwepemc community of Neskonlith have invited MiningWatch to make several presentations and discuss the potential impacts of the projects in the area. From these visits it is clear that many Neskonlith people are staunchly opposed to the Ruddock Creek project.

As reported in our last newsletter, the Ajax Mine is of concern to Kamloops residents given that the project is perched on the city boundary and would directly affect an important natural and recreational area.

MiningWatch is collaborating with Sierra Club of BC and Ecovision Law to evaluate potential cumulative effects of these projects and the threat of “worst case scenarios”, and to submit these findings into the individual environmental assessments for the Harper Creek and Ajax mines.

In a semi-arid region, use and changes to hydrology are a major concern for all these projects, as are the potential threats to water quality. MiningWatch is currently trying to get access to results from the federal Environmental Effects Monitoring program for metal mines to better understand these threats. The latest summary of data, from 2007, clearly indicated that despite general compliance with regulations, “on average” mine effluents are still affecting downstream fish and fish habitat.

Blog Entry Greenwashing at the World’s Biggest Mining Convention 05.08.2022
News B.C. has a growing mine waste problem. The risks could be catastrophic. 14.07.2022
News New Analysis Confirms High Risk, Threats Posed by B.C.'s Booming Mining Sector 14.07.2022
Publication Not Yet a World Leader: Environmental Reviews of Metal Mines in British Columbia 05.05.2022
Blog Entry Is B.C. Really a World Leader When It Comes to Environmental Reviews of Metal Mines? 05.05.2022