Preliminary Report: Gold Mining and the Defence of Water in El Salvador

From May 10-13, 2013, an international delegation from 12 countries representing 22 human rights, social justice and environmental non-profit organizations and advocates, along with academics, journalists, artists and grassroots activists, carried out a three day tour of El Salvador to examine experiences with gold mining operations and the defence of water.

The delegation visited three emblematic sites: (1) the town of San Sebastian, department of La Unión where Milwaukee-based Commerce Group operated a gold mine off and on starting in 1968 until the government revoked its licence in 2006 on environmental grounds; (2) communities in the department of Cabañas where Vancouver-based Pacific Rim Mining’s exploration activities gave rise to widespread opposition, and the company failed to obtain the permit to put its El Dorado gold project into production; (3) the town of Asunción Mita, department of Jutiapa, Guatemala, on the border with El Salvador, where Goldcorp’s Cerro Blanco gold project threatens a transnational watershed and could provoke a transborder conflict.

Both Commerce Group and Pacific Rim Mining are currently taking advantage of unjust investor protection mechanisms to sue the government of El Salvador for a total of over $400 million dollars in the International Center for Settlement of Investment Disputes (ICSID), a Washington, D.C.- based World Bank tribunal. Meanwhile, their operations have had significant social and environmental impacts on affected communities.

In San Sebastian, we saw the consequences of industrial mining on the local watershed and public health. We saw the lasting and unmitigated impacts of acid mine drainage in the rust-colored water of the San Sebastian river. We heard from local residents that instead of generating wealth for communities, large-scale mining leaves behind poverty and negates the possibility for economically, socially or environmentally sustainable development. We also learned of high incidence within the area of kidney failure, cancer, skin problems and nervous system disorders, such as Guillain Barre Syndrome. What we have seen in San Sebastian should not be allowed to happen in Cabañas or elsewhere.

In Cabañas, representatives of local organizations challenged myths that Pacific Rim has perpetuated in order to promote its gold-mining project to the Salvadoran public. Whereas Pacific Rim has claimed that its project would bring economic growth and jobs, community members stated that the company’s presence has generated social divisions and led to violence. Local activists emphasized that they are opting for economically, socially and environmentally sustainable solutions, not mining, and expressed frustration that the murders of anti-mining activists Marcelo Rivera, Ramiro Rivera, Dora Alicia Sorto and Juan Francisco Durán Ayala have yet to be fully investigated. Whereas the company has claimed it will leave the water cleaner that it began after its industrial open-pit and underground gold mining operations, we heard that the community has empowered itself with knowledge and skills to better understand and protect their water supplies. In particular, one local organization has carried out a baseline water study, something found to be largely lacking in the Environmental Impact Assessment that Pacific Rim originally presented to the Ministry of Environment, and is taking steps to identify threats and improve local water management.

In the town Asunción Mita, Guatemala, a short distance from the Salvadoran border, we heard about how local workers were recently let go from the mine, presumably because it has been flooded with hot water from a geothermal aquifer. The geothermal water, as well as surrounding soil and rock has been found to contain toxic arsenic in concentrations exceeding health standards. Community members expressed concern about possible contamination from water discharged from the mine and its impact on those who depend on fishing for their livelihood and food security. They also indicated that they did not know about the project until it was already approved and that “gifts” from the mining company in the form of projects and services had created social divisions, denying them the right to prior consultation and any opportunity to say no. Guatemalan civil society organization, Madre Selva, has publicly demonstrated that the project’s Environmental Impact Assessment (EIA) was approved without citizen participation, using insufficient and incorrect data. 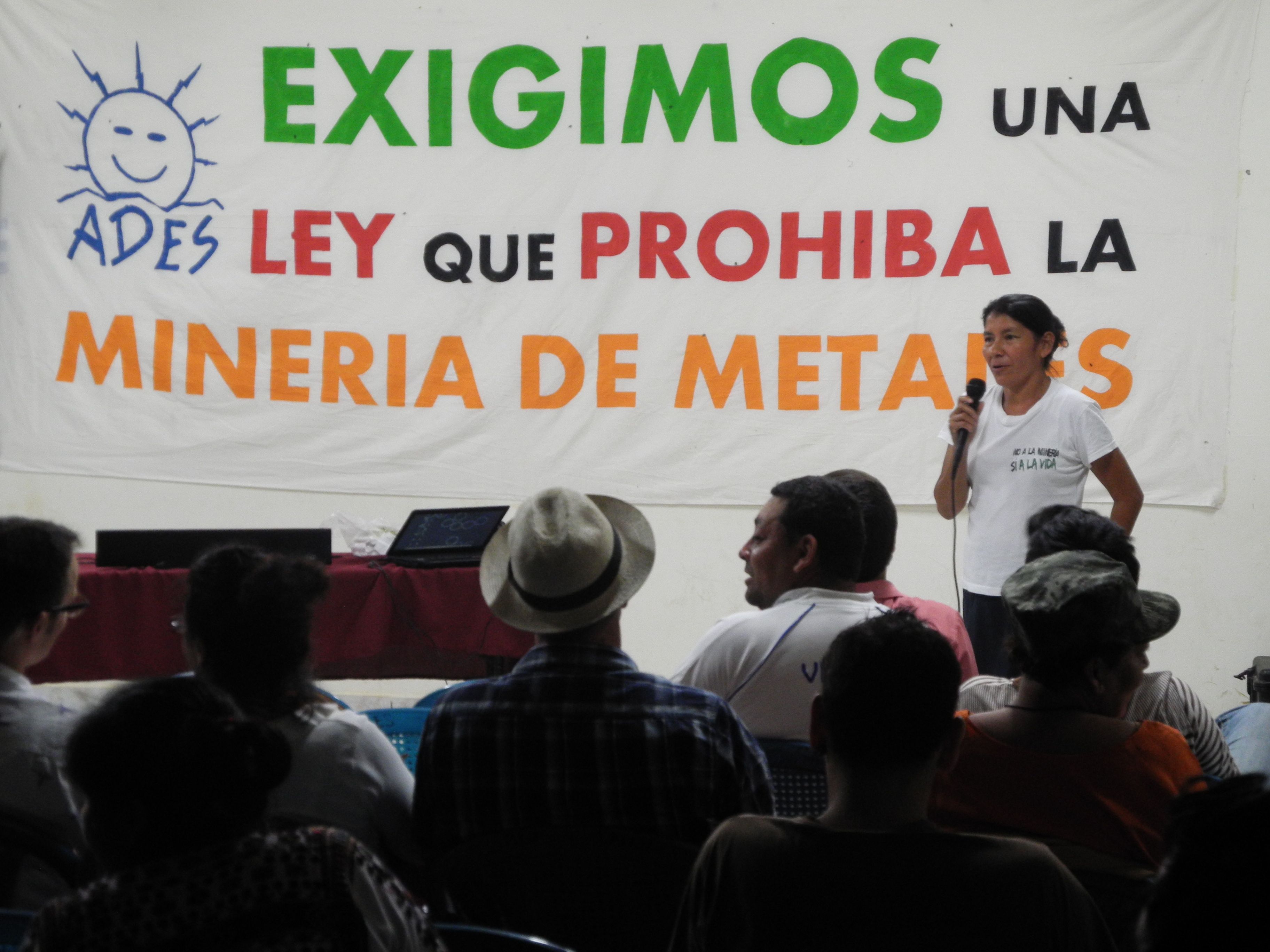 Immediately downstream of Goldcorp’s Cerro Blanco project is the Güija Lake, which straddles the border between Guatemala and El Salvador, at the headwaters of the Lempa River watershed. The Salvadoran Ombudsman in Defence of Human Rights has determined, based on the importance of this watershed to the small, densely populated country, that this very high risk project poses a serious threat to the human rights of Salvadorans, including rights to life, health, a safe living environment, water and access to information, and as such is a threat to the country’s sustainable development.

We recognize the National Roundtable on Metal Mining (known as‘La Mesa’ or ‘The Roundtable’) as a broad-based civil society coalition in El Salvador that has brought together community voices and made mining a national issue in El Salvador.

We affirm the following demands of La Mesa:

Council of Canadians and the Blue Planet Project, Ottawa