By act and by omission, the Canadian state has been found guilty for its role in human rights violations in Latin America as a result of its efforts to spur, sponsor and protect Canadian mining investments abroad, along with five Canadian mining companies.

From May 31st to June 1st, an expert tribunal gathered in Montreal for the first ever Permanent Peoples’ Tribunal (PPT) in Canada. The PPT is an international initiative established in 1979 to give visibility to underreported human rights violations “where national and international justice systems are found to be incapable of ensuring that rights are respected.” Some forty organizations from Quebec and Canada supported this PPT session on Canadian mining in Latin America, including MiningWatch Canada. 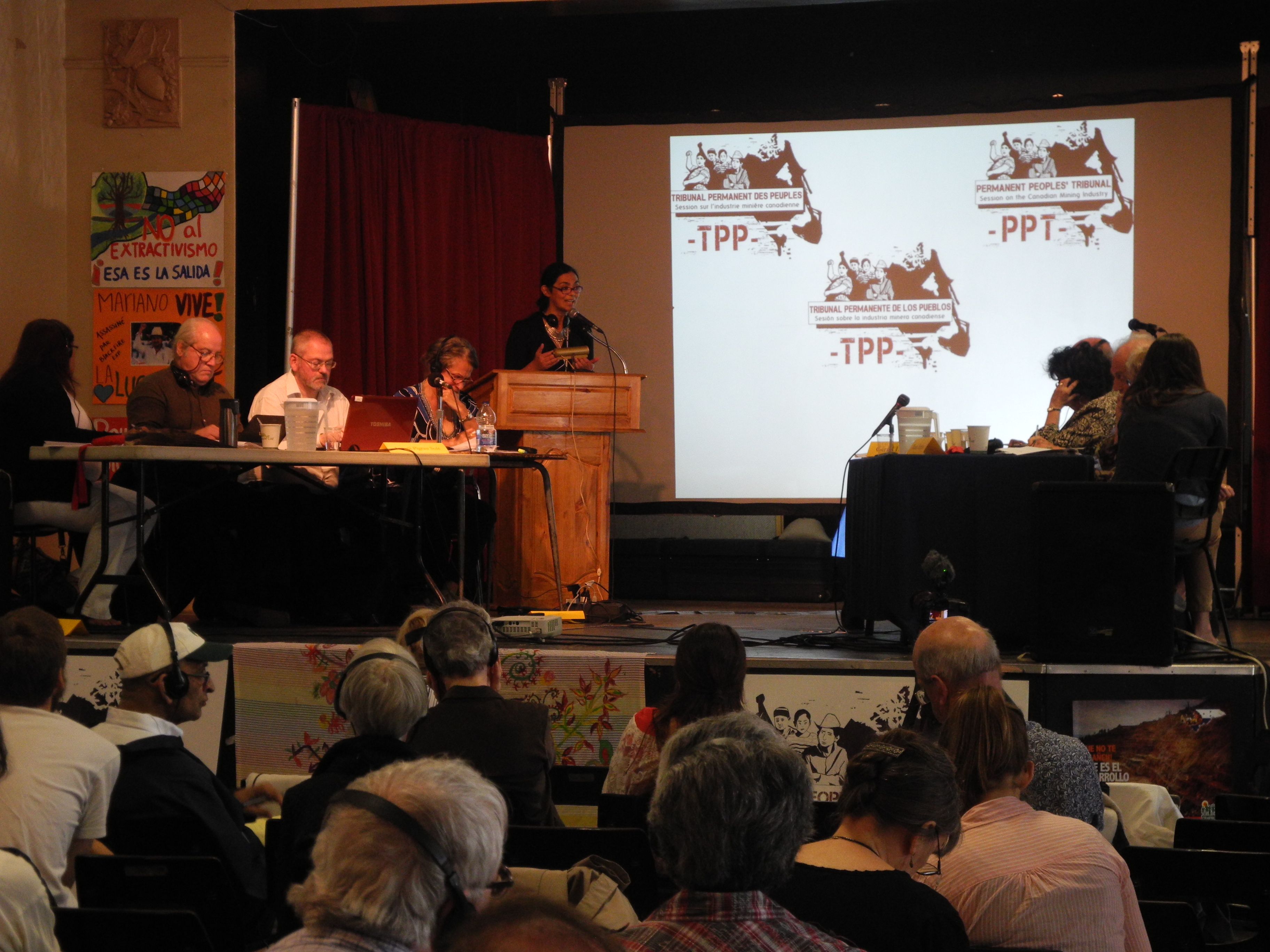 Hundreds of mining conflicts are taking place across Latin America, many in connection with Canadian companies that dominate the globalized industry. The PPT onbserved that the root of many conflicts, is that mining projects tend to be “undertaken without respect for the right of self-determination of affected peoples and for the right of people to define for themselves their ways of life and their future.” Mining-related abuses almost always go unaddressed. The reponsibility for these violations is shared between mining corporations, the states where abuses occur and Canada, state of origin for 75% of the world’s mining companies. These companies find our lax laws, stock exchanges, diplomatic supports and willingness to turn a blind eye to abuses all highly convenient.

Over two days of hearings, the tribunal considered thirteen accusations against Canadian mining companies and the Canadian state.

On May 30th, witnesses testified about serious human rights violations in connection with the operations of Blackfire Exploration in Chiapas, Mexico; Excellon Resources in Durango, Mexico; Tahoe Resources in Guatemala; Goldcorp in Honduras; and Barrick Gold in Chile.

On May 31st, testimonies examined Canadian political, diplomatic, economic and financial supports to the Canadian mining industry abroad, in addition to the ways Canadian foreign policy upholds the impunity of Canadian mining corporations when they are implicated in abuses.

The companies were all found culpable. Additionally, the PPT stated in its preliminary verdict delivered on June 1st that the Canadian state has “failed in [its] obligation to protect human rights, to prevent and sanction violations, particularly those related to Canadian mining companies.”

“The Permanent Peoples’ Tribunal finds that Canadian mining expansion in Latin America would not have been possible without the promotion and direct involvement of the Canadian state to uphold the mining industry through diverse political activities and government programs. Canadian state intervention has taken various forms. First, through political support and meddling in the legislative processes of host states. For example, through inappropriate interference in the reforms of mining and environmental legislation, diplomatic lobbying, support for companies’ social projects and negotiating investment agreements that protect Canadian investments abroad.

Second, the Canadian state has also provided economic and financial support channeled through the Export Development Corporation and the Canadian Pension Fund Investment Board. It has also failed to ensure transparency in the regulation of the Canadian stock exchanges, installed favourable tax regimes, and supported trade missions, among other initiatives.

Finally, the Canadian state has also imposed or tolerated barriers to justice in Canada for individuals and communities affected by the activities of Canadian mining companies.”

“In the case of the Canadian state, it is responsible through its actions when it stimulates the presence of Canadian mining companies in other countries through political, economic, financial and diplomatic support; when it tolerates or covers up human rights violations that companies are perpetrating; or when it denies access to effective mechanisms to protect victims from these violations.

The Canadian state is responsible by omission when it abstains from adopting measures, or from requiring that Canadian mining companies undertake measures to prevent or remedy human rights violations.”

During debate this week in parliament, Conservative MP Randy Hoback argued that Canada lacks jurisdiction to address abuses overseas. But its responsibility to take action is inescapable, concludes the PPT:

Stay tuned for the PPT’s full verdict in about a month’s time at: tppcanada.org.

Blog Entry Greenwashing at the World’s Biggest Mining Convention 05.08.2022
News Economic development should serve all, Trudeau says as Chile reforms mining sector 07.06.2022
Publication Canadian Mining Investments in Chile: Extractivism and Conflict 04.03.2022
Publication Mapping Community Resistance to the Impacts of Mining for the Energy Transition in the Americas 04.03.2022
News Chile in the crosshairs of a Canadian resource rush 15.02.2022