On July 14th, as havoc, panic, and fear caused by COVID-19 continues to sweep through the Ecuadorian Amazon, Canadian company Solaris Resources celebrated its new listing on the Toronto Stock Exchange’s Venture Exchange (TSX-V). It then proceeded to launch a two-week Twitter campaign championing its successful community alliances around its Warintza copper-gold  project, and their successes with the “novel consultation process” with Indigenous Shuar Warints and Yawi communities.

The global pandemic is raging through Indigenous Shuar territory in Ecuador, where Canadian companies continue to operate, flying helicopters over communities that are struggling to deal with mounting COVID cases – and fatalities. As of July 27, 2020, 443 Shuar tested positive for the virus with another 82 suspected cases, and 9 deaths have been confirmed along with another 7 suspected. Earlier this year the Shuar Arutam government (PSHA) and over a hundred international organizations condemned the company for its role in bringing the virus into their territory, an accusations the company denies.

The Shuar Arutam government (PSHA from its initials in Spanish), totally abandoned by the pro-mining Ecuadorian government, has been forced to defend itself on all sides: protecting its members by mobilizing medical brigades to test and provide care for the mounting numbers of Indigenous community members who live far from medical services; assisting families with burial arrangements; trying to provide sustenance for families and support for the economic crisis looming in the region; but also having to defend itself against a mining company that continues – despite the Indigenous community’s firm rejection – to push itself deeper into Shuar territory, putting communities at risk of infection, fomenting internal tensions, and building up its image to potential foreign investors.

However, as the PSHA noted in a recent public statement (translated below), that image is built on a deliberate fabrication of a sham consultation process which has no legitimacy for the internal organization of the Shuar Arutam peoples. It has become clear during Solaris’ investor campaign roll-out that the company is pinning its pitch to investors on this consultation process: it has found the magical key to unlocking the Ecuadorian Amazon for mining investors – a region which has always opposed mining for the damage it will do to the ecosystem and Indigenous societies and economies. What Solaris doesn’t say, however, is that the consultation process is deliberately ignoring the political organization of communities in the region, and that the company’s presence is producing heightened tensions and security risks for the leaders of the organization.

The Shuar Arutam government is the overarching political organization of the Shuar Arutam peoples who inhabit the province of Morona-Santiago in the Ecuadorian Amazon. It encompasses 47 communities and 6 associations who live in and around the proposed Warintza project, but also much beyond it. The PSHA holds general assemblies where it brings together all its members to make decisions, and at one such assembly last August, 2019, they confirmed that mining goes against the PSHA’s “Life Plan”, a plan to protect the biodiversity of the region upon which the communities depend. According to its recent statement in the face of these ongoing threats by Solaris, the PSHA:

“declare Warintza to be a Protected Area within which we will fight in defence of our land, our forests, and the recognition and appreciation of our culture. The world must understand that our land, forests, and knowledge are vitally important to confront the current environmental crisis facing our planet; therefore, we express our support for life.”

The PSHA also has declared on multiple occasions that mining companies need to leave their territories, and that any agreements that were signed between former PSHA leaders and the companies were terminated when those leader’s mandates ended.

On July 24, Solaris noted in a post on its Twitter account that investors like Ross Beaty, Daniel Earle and Equinox Gold (all Canadian) are the company’s “strategic allies”. Ross Beaty currently owns 5% of outstanding shares of Solaris and is the founder, CEO and important shareholder of Equinox Gold. It doesn’t come as a surprise, then, that Ross Beaty’s original flagship company, Pan American Silver, is engaging in a discriminatory and illegal consultation process involving the Indigeonus Xinka peoples in Guatemala around its Escobal mine. The strategy seems to be to continue to undermine Indigenous self-determination and opposition, all the while presenting those operations to the investment community as responsible and inclusive.

In both cases, mining development has led to threats, intimidation, and a rupturing of the social fabric which is so important to keep Indigenous communities thriving, and which is even more critical during times of crisis like the current pandemic.

For more information on the Xinka resistance to the Escobal mine, including amazing videos the Indigenous Xinka Parliament is putting out in response to Pan American Silver’s pursuit of this consultation process, visit this new website: resistescobal.com.

Stay tuned for more information on how to support the PSHA in their plight to protect the health and biodiversity of their communities.

You can read the full PSHA statement here below:

The Shuar Arutam People have decided: NO to Mining. We don’t want to be consulted.

Faced with the malicious and unfounded postings on social media by Canadian company Solaris Resources regarding mining exploration in Warintza during a time of an exceptional health emergency throughout the territory of the Morona-Santiago Province, the Shuar Arutam People (PSHA in Spanish) hereby declares:

The Shuar Arutam Government Council (CGPSHA in Spanish) is the highest authority and the sole legal representative of the forty-seven communities and six associations that make up the Shuar Arutam People, legitimately elected at the General Assembly on March 31, 2019 and approved by the Secretary of Human Rights and Education on December 27, 2019 (Official Ruling No. SDH-CAJ-2019-1528-O). In compliance with the mandate of the Political Constitution of Ecuador (Articles 56 and 57) and articulated in ILO Convention 169, Indigenous people’s rights are inviolable, their territories are protected and imprescriptible, and, through the resolutions and powers conferred by the Statutes of the CGPSHA and the Life Plan developed by the Shuar Arutam people, we publicly proclaim that:

President of the Shuar Arutam People 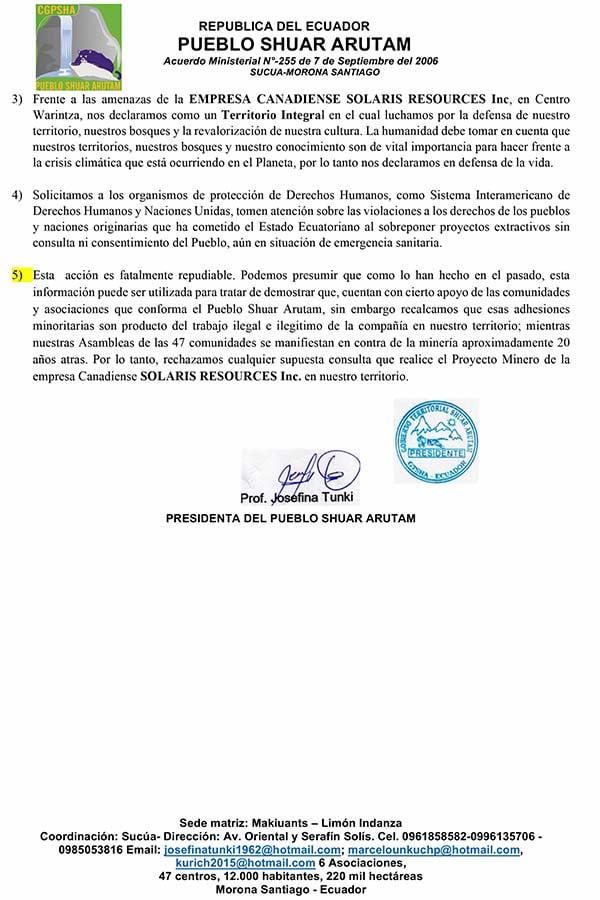