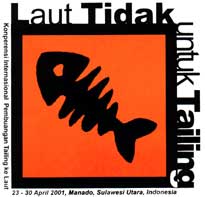 Under large banners with a dead fish as a logo and the slogan "Laut Tidak Untuk Tailing - The Ocean is not for Tailings," some eighty people from island southeast Asia and the Pacific region - Indonesia, the Philippines, Papua New Guinea, Fiji, Solomon Islands and New Caledonia - came together in Indonesia to discuss the latest and most rapidly evolving threat to their coastal resources from international mining. This threat is from the ocean dumping of mine waste, known in the industry as Submarine Tailings Disposal (STD).

Submarine tailings disposal is the disposal of mine-mill waste or tailings into the sea through a submerged pipe (see also last issue). Villagers, scientists and government officials from the western Pacific were joined by scientists and NGO representatives from the US, England, Canada and Australia; countries that are home to most of the multinational mining companies (and their consultants) that promote the use of submarine tailings disposal in the Western Pacific region. The practice is effectively illegal in the US and Canada.

Participants ended the conference by drafting a joint declaration - the Manado Declaration on Submarine Tailings Disposal.

Some of the conclusions of the conference were that:

There is evidence that some authorities in the region are getting concerned about this problem. On May 4, the Indonesian Minister of Environmental Affairs, Sonny Keraf, met with conference participants and announced he would no longer issue permits for submarine tailings disposal. Following a study by the United States Geological Survey, the Philippine government says it plans to turn down Placer Dome's application to dump tailings.

Following the conference, on May 31st, about a hundred people rallied in Manila against submarine tailings disposal. Most were villagers from three islands where it is being proposed. There are also plans to hold a nationwide conference on submarine tailings disposal in the Philippines. Similar followup activities are planned for other counties in the western Pacific and conference participants agreed to continue to work together and support each other's efforts to protect critical marine resources from ocean dumping of mine waste.