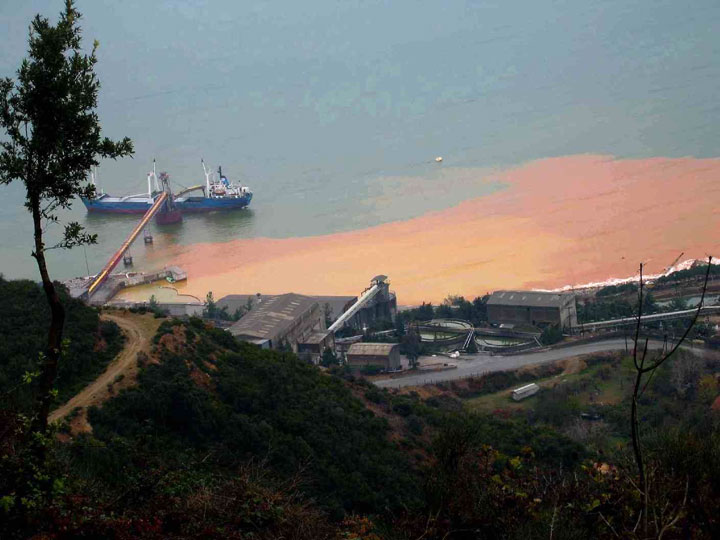 (Ierissos, Greece) Mine wastes from a lead and zinc mining facility owned by a subsidiary of the Canadian-based TVX Gold, Inc. are pouring into the Bay of Ierissos in northeastern Greece, a region famous for its scenic beaches and fishing villages. A one-kilometre stretch of the bay is now streaked with a deep red plume of pollution.

The wastes flowing into the bay of Ierissos are likely to contain traces of lead, zinc, silver, and a host of other toxic metals, as well as cyanide and other chemicals which are used to process metals from TVX's mine in Stratoniki, Greece. According to Robert E. Moran, a Colorado-based hydrologist and geochemist who visited the TVX mine and the surrounding region in 2001, "Given the inadequate system for containing wastes, the steep topography of the region, and the heavy rainfalls during winter, it is clear that significant quantities of toxic contaminants are washing into the bay and endangering marine life."

On 6 December 2002, the Greek Supreme Court ordered TVX to close down the mine beneath Stratoniki because TVX's environmental assessments were found inadequate to ensure the safety of the village and its people. The mine was to shut down in December, but still continues to operate.

Local villagers and fishermen have observed the red wastes entering the bay since December 7. Government authorities and the mining company, however, have not made any public statement regarding the pollution, nor have they proposed any efforts to control the damage.

Notes Tolis Papageorgiou, a civil engineer: "Commercial fishing could be seriously affected by this spill, because of the risk of heavy metal contamination. The bay of Ierissos is one of the major fisheries of Greece."

Maria Kadoglou of Hellenic Mining Watch adds, "We urge the authorities to protect residents and the bay from the polluting impacts of this mine during its closure. TVX must be held accountable for the environmental damage caused by the mine." Local rock has high sulphide content, which can drain acid for centuries after the mine is closed. Acid mine drainage already poses risks to the local community and water supplies.