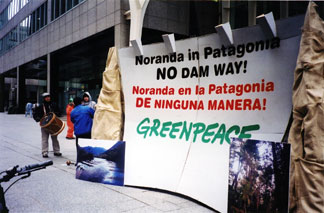 On November 6, 2003, Greenpeace International released its report "Noranda: from Canada to Patagonia, a Life of Crime".

To mark this event, Greenpeace Canada built a 12 foot by 8 foot dam and put it outside of the Noranda/Brascan offices in Toronto. A four-piece Chilean band played next to the dam and hundreds of leaflets about the proposed Alumysa aluminum smelter in Chile were given to passers-by on Bay Street.

MiningWatch Canada joined this festive occasion, as did our Chilean colleagues Peter Hartmann (President of the Citizen's Committee for the Defence of the Aisén Life Preserve) and Gonzalo Villarino (Executive Director of Greenpeace Chile).

Peter, Gonzalo, and Peter Tabuns (Executive Director of Greenpeace Canada) went to the Noranda/Brascan office to meet with top executives, but were escorted out of the building. They left a copy of the report with officials at the office. The Greenpeace report can be found at www.greenpeace.ca.