Stopping the Rosia Montana Gold Mine 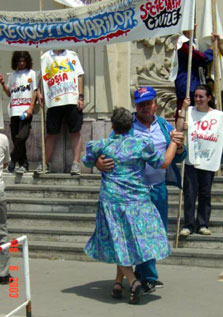 MiningWatch Canada, Alburnus Maior and the Working Group on Export Development Canada held a press conference November 10 in support of demonstrations in cities all over Europe against Gabriel Resources' proposed Rosia Montana gold mine.

Since the press conference, Export Development Canada (EDC) has categorically denied any involvement in the project.

The Orthodox Church leaders in Romania (the Sfantul Sinod) have also issued a statement opposing the gold mine. See our press release "Romania's Latest Gabriel Resource Rebel: The Orthodox Church" for details.

At a Rosia Montana Gold Corporation (RMGC) propaganda seminar in Romania on November 26, the public received some impressive posters picturing a huge pit in the middle of a city in Waihi, New Zealand. They were told that the RCMG mine would be similar. Martha's pit, which belongs to Newmont, is a model reclamation project, in a highly regulated environment. The RCMG project, on the other hand, is a huge gold mine with four open pits, a 600 hectare tailing facility, and of course acid mine drainage and cyanide. This project means the destruction of an historical village (Rosia Montana) and the forced resettlement of 2000 people, in a country with little capacity to regulate or monitor reclamation.

The Rosia Montana Gold Mine has just filed for environmental permitting and is expected to submit its EIA next month. MiningWatch Canada has asked to be added as a party to the EIA review.

An EU Parliamentary Delegation also visited Rosia Montana on December 7th. They came to see the mining company and the community and hear what they have to say. By all reports, they were impressed by what they saw shocked by what was being proposed. This visit is important, because Romania is anxious to be accepted into the European Union.

You can get up-to-date information on the Rosia Montana campaign against this mine at the web site of the citizens' group Alburnus Maior at www.rosiamontana.org.

On July 16, 2003, Alburnus Maior staged a protest in Bucharest to present a statement to Gabriel Resources and its shareholders, complete with traditional music and dancing from the region's Motzi people. Here is the Statement:

"Once more, Alburnus Maior warns Gabriel Resources' shareholders and all possible investors, that this project will never take place. And this, besides any other reason, for the simple fact that we will not sell our homes, pastures, forests, churches and cemeteries, and we will not move from Rosia Montana or Corna. Nobody, and no money can force us out. Maybe you consider that we are poor people by Canadian standards, but we are not for sale, and you should understand that there are things and people that money cannot buy.

We know very well our rights, just as we know that the concessions rights obtained by RMGC are not legal, and can be suppressed at any time in a court of law.