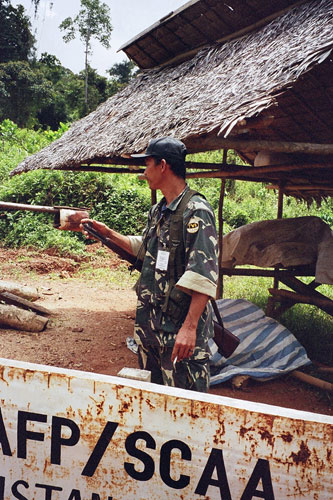 The community at TVI Pacific’s mine site in the municipality of Siocon, Zamboanga del Norte is made up of indigenous Subanon, some of whom are native to that place and included in the Certificate of Ancestral Domain Title, and others that have been come from others areas to work for TVI Pacific, and “settlers,” mainly from the Visayan region of the Philippines, some of whom were small scale miners all of whom are now agricultural.

As TVI Pacific’s mine has closed in on existing homes, TVI has taken to evicting families. Displacement of populations related to large scale projects around the world is recognized by the World Bank as one of the greatest sources of impoverishment (World Bank Policy on Involuntary Resettlement, 2001). Mining-Induced Displacement and Resettlement (MIDR) was recognized in the final report of a mining industry-led multi-year, multi-stakeholder process to be a major source of societal instability (Mining, Minerals and Sustainable Development 2002:158).

International Human Rights Instruments such as ILO 169 (specifically for Indigenous Peoples) and the International Covenant on Economic, Social and Cultural Rights, as well as the World Bank Extractive Industries Review (2003:58) clearly indicate that relocation of populations for large scale development projects should be avoided if at all possible and never occur without the free, prior and informed consent (FPIC) of effected individuals set out in a consent agreement.

TVI Pacific did not

See the letter that MiningWatch Canada sent to the Embassy:

I am writing this urgent e-mail to each of you as I have met with each of you on separate occasions and have discussed with you serious human rights concerns regarding the TVI Pacific mine project in Canatuan, Zamboanga del Norte.

We recently received reports from our local partners in Zamboanga del Norte that there has been yet another case of a forced relocation and demolition of a family home within the TVI concession in Canatuan. Our reports indicate that this event took place after sunset on the evening of June 22. It involved TVI Pacific’s private security forces (SCAA). Both the owners of the home, Mr. and Mrs. Galvez, and some of the 14 members of the community who were trying to help the couple to protect the home were injured in the forced relocation. The private property inside the home was confiscated against the wishes of the couple.

This morning, July 7, 2006, we received an urgent appeal for assistance from the Canatuan Farmers’ Association who fear that the homes and food crops of some of their members may also soon be destroyed without their consent.

According to TVI’s own reporting, some 30 families, 5 of which are indigenous Subanon and the rest are farmers, have not agreed to be relocated in order to make place for TVI’s mine.

I am writing to remind you that resettlement of established families is widely recognized as one of the greatest sources of impoverishment associated with large development projects around the world (see references p. 85: www.frameworkforresponsiblemining.org), and in the case of indigenous peoples, it is additionally a major threat to their cultural identity and existence as a people. For these reasons, best practice standards have been developed for the relocation of families that conform with international human rights principles. These standards, based on extensive experience, have been set out in numerous places (Mines Minerals and Sustainable Development 2002; World Bank 2003; World Commission on Dams 2000 etc.). Minimally, there should be prior social and economic baseline studies, a relocation impact assessment conducted in conjunction with affected communities focussing specifically on marginal individuals and groups within communities (women, the elderly etc.), a negotiated, agreed upon, and legally binding compensation plan that includes “land for land” alternatives, a relocation bond for unforeseen circumstances, and a dispute resolution mechanism.

Forced resettlement, as is happening at the TVI Pacific site is not acceptable under any standards for responsible mining. TVI Pacific is responsible for activities taking place within its concession and for the activities of its security forces.

I would like to remind you that TVI Pacific’s Canatuan project is currently the subject of a Human Rights Impact Assessment led by Rights and Democracy in Montreal.

TVI Pacific has information up on its web site stating that the company is “lauded” by the Canadian Ambassador “for its responsible mining.” In discussions with each of you I have also received assurances that this company will mine responsibly and will not abuse human and indigenous rights.

I therefore urge you to impress upon the executive of TVI Pacific that no further forced relocations and home destructions should take place within its concession. TVI Pacific should be encouraged to inform itself of best practice standards and to implement relocation assessments, consultations and plans in accordance with best practice standards for relocation as I have indicated above.

I look forward to your soonest response to this urgent request for intervention.