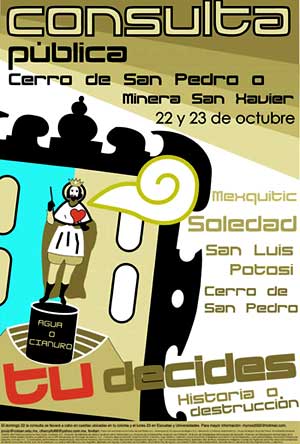 Members of the Coordination of the Public Referendum CERRO SAN PEDRO/SAN XAVIER MINES have released to the public and to interested public officials this report on the activities and results of the popular poll carried out on the 22nd and 23rd of October, 2006, a poll that with the participation of society, was carried regarding their opinions with respect to the acceptance or rejection of the mining project San Xavier in Cerro de San Pedro.

a. In accordance to the Convocation, the following were informed and invited to participate in the role of observers: 1) The State Electoral Commission, 2) The State Government, 3) Mining company Minera San Xavier, Inc., a subsidiary of Metallica Resources Inc.

b. The logistical activities of the event were initiated in mid-September, and beginning October 12 the information campaign began, consisting of the distribution of 50,000 flyers, the posting of 3000 official announcements and 1000 posters. Additionally, a press campaign was carried out, a paid insert included in the Saturday October 21 edition of the newspaper Pulso, and various public announcements in two local radio stations.

c. The infrastructure work carried out consisted of the aquisition of ballot boxes, printing of voting ballots and all of the materials reqired for the funcioning of the balloting, the location of the voting centers and the training of personnel for the voting, with an estimate of 200 volunteers.

f. Of the 68 voting centers proposed, for the two days, 56 were fixed-site locations in 4 municipalities and two mobile. The total number of voters was 19,608 persons. They answered a total of 109,153 questions in the following order:

g. In relation to these results, it should be emphasised that the result of question (7) is considered to be the basis of the preceeding 6 questions, and makes apparent the catagorical NO to the installation of Minera San Xavier in Cerro de San Pedro with a percentage of 97.59% against.

h. Additionally some 2,204 personal opinions were collected. 16% of respondees wanted better information and diffusion of the problem. 5% opined that the ballot should be more objective and less tendencious, and a good number of persons questioned the passive or insensitive attitude of the government in the face of the mining project.

i. Some 4,121 email addresses were registered; this is for us an indication of the special interest that these persons regarding the problem, reflecting this interest, a network will be organized to maintain the exchange of information and activities of the movement.

j. The results will be sent to all of the government officials involved in the problem, locally as well as on an international level, to be shared with countries we have had informed beforehand of the event, and whom are fighting struggles similar to ours.

By the cordination of the Citizens' Consultation

Convocation of the Civil Society Consutation

However little-known it is, owing to the press censorship which prevents our society from being fully informed, the mining company Minera San Xavier (Metallica Resources) does not have permits to operate: San Luis Ecológico annuled the land-use permit awarded in 1999 by the National Institute of Ecology to the transnational mining firm Minera San Xavier in categorical and irreversible form through a judicial act of nullification. The sentence was handed down by the Superior Chamber of the Tribunal of Administrative and Fiscal Justice on October 5, 2005. The unchallengable sentence annuling the permit was based on the fact that the permit initially awarded was totally in violation of the State Decree of 09/24/1993, which defined Cerro de San Pedro as a zone of wildlife preservation, with a policy of restoration which should be implemented within twenty years, and with protection of the water aquifers. Violation of this Decree is a violation of the General Law of Ecological Equilibrium and Protection of the Environment.

Mining permits issued must be in conformity with Article 181 of the General Law of Ecological Equilibrium and Protection of the Environment, and officials who awarded the permits in violation with this law should be sanctioned. However, in an unprecendented manner, the Secretary of Environment and Natural Resources (SEMARNAT) awarded a new permit to Minera San Xavier on April 10, 2006, in plain defiance and violation of the beforementioned laws. In the upcoming days, the Superior Chamber of the Tribunal of Fiscal and Administrative Justice will order SEMARNAT to comply with the sentence, with the implication that the responsible government officials be brought before justice.

It is fitting to show that our referendum was carried out based in Article 34 of the General Law of Ecological Equilibrium and Protection of the Environment, which states that as part of the Environmental Impact process State authorities are obligated to submit issues that would affect society to public opinion, and Minera San Xavier has carried out its process in an illegal manner. The State Governor has also neglected to solicit public opinion, as is clearly established in Article 39 of the State Political Constitution, which clearly defines these types of actions, which are authorized in the Federal, State and Municipal frameworks, and should be submitted to popular consultation.

The questions to respond to in the ballot of the referendum:

1. Do you agree that Minera San Xavier should be able to contaminate the water table and the atmosphere of the Valley of San Luis Potosí with cyanide and other dangerous substances?

2. Do you agree that Minera San Xavier should use 25 tonnes/day of explosives for 8 or 9 years, destroying the environment and putting in risk the historic town of Cerro de San Pedro, heritage of the nation?

3. Do you agree that Minera San Xavier should use the Municipality of Graciano Sánchez to stockpile millions of tonnes of contaminated wastes?

4. Do you agree with the destruction of protected flora and fauna carried out by Minera San Xavier?

5. Do you agree that state Governor Marcelo de los Santos and the President of the Republic Vincente Fox should support the installation of Minera San Xavier in Cerro de San Pedro?

6. Do you agree that the reference to Cerro de San Pedro should be taken off of the Coat of Arms of San Luis Potosí as a foundational symbol of our history?

7. Do you agree with the installation of Minera San Xavier in Cerro de San Pedro?