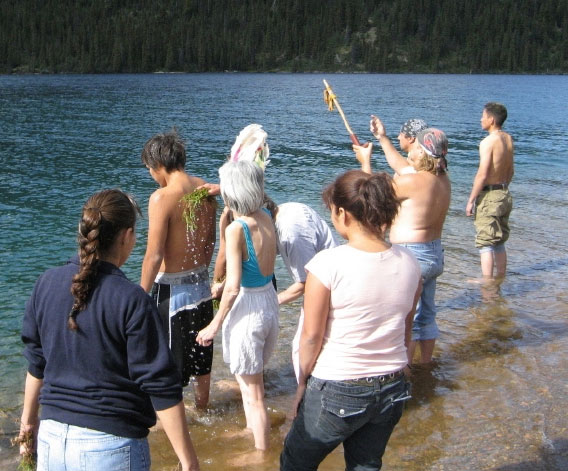 Tse Keh Nay Territory – The three Tse Keh Nay Nations gathered in force and held a water ceremony to protect Duncan Lake. The lake, which the First Nations call “Amazay” is situated 400 km northwest of Prince George. Northgate Minerals plans to build a 90 metre high dam to flood the valley and turn the lake into a massive acid rock tailings pit to store contaminated waste from the proposed Kemess North mine.

Takla Chief John Allen French donned his bear claw amulet and led the ceremony. Elders and youth bathed in the sacred waters at Amazay to the sounds of traditional drumming and singing and were brushed with medicinal plants from the shores of the lake. Chief French spoke from his heart about the importance of protecting the lake. “As a Nation we are not opposed to mining or economic development, but we have to remember what is important. Gold does not run through our blood. We are all made of water. We have pushed the boundaries too far if we are willing to destroy life itself, water, as a means of getting cheaper gold.”

Chief French pointed to the lush green valley at the south end of the lake and to all the traditional camp-sites around the lake which he believes were neglected by archaeologists hired by the company. “Our people have been here for thousands of years. We found an old moose-hide stretching rack just up the trail. You can see evidence of our people all around here: you just have to know where to look.” Pointing across the lake to magnificent outcrops of white stones with black streaks across the lake, Chief French stated, “Those grandfathers are mourning the destruction of our land. We have to protect the way of life of our people to harvest, hunt, and make medicines and bathe in the healing waters of the Old Ones. We will protect this lake, not only for our children’s children, but for everyone.”

Grand Chief Gordon Pierre from Tsay Keh Dene committed to protect the lake. In addition to concerns about destroying fish habitat and hunting grounds, Grand Chief Pierre expressed concerns about the impacts on the whole watershed. “Our people live downstream. We drink that water. There is no way a dam will hold in all the poisoned water. We have lived here for thousands of years. We will always be here and we need clean water.” Grand Chief Pierre says his people are frustrated with having to fight a major battle after having gone through so much hardship already from their forced relocation when the Williston Lake dam flooded out their traditional villages and hunting grounds.

Chief Donny VanSomer brought a group of youth from the Kwadacha Rediscovery Program to the camp at Amazay. “We wanted our youth to see the battles we are fighting to protect their heritage”, stated Chief VanSomer. “We loaded them into a school bus and drove out to Amazay and they hiked down to the lake. They set up camp and stayed over night at the lake so they had a chance to see with their own eyes this beautiful lake that will be lost if the dam goes ahead”.

The federal and provincial governments are halfway through an environmental assessment that has not yet included any First Nation participation. The Tse Keh Nay have continually pointed out that the process fails to meet legal requirements to consult and accommodate First Nations. The First Nations have also criticized the archaeology and fish studies done by the company to date as part of the Environmental Assessment process. “Their archaeology report was very limited”, states Chief French. “They missed culturally modified trees and a lot of traditional camping sites. They were more interested in old tin cans than our 1300 year old artifacts. We have filed a complaint with the Minister about archaeological issues and have hired an independent archaeologist to do a more detailed assessment.”

“We can’t understand why nobody is standing up for this lake” stated Chief French. None of the government ministries in charge of protecting fish, archaeology and the environment are doing their job. We’ll have to do their jobs for them. We are growing stronger and stronger as a Nation and we will do what it takes to protect our waters and our lands.”