Chalatenango Communities Say ‘No’ to Mining Before Salvadoran Legislative Assembly 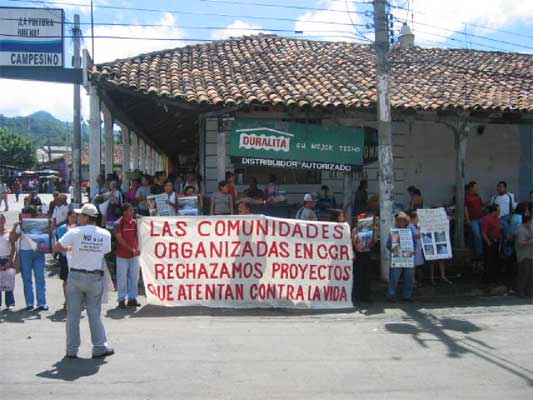 (Chalatenango) On Saturday, September 2, 2006, the El Salvador Legislative Assembly held its weekly floor session in Chalatenango City rather than in San Salvador. The organized communities of the CCR-CRIPDES (Association of Rural Communities for the Development of Chalatenango-Christian Committee for the Displaced of El Salvador) were present, lining the streets of Chalatenango with anti-mining banners. The protest was part of ongoing activities by the National Table Against Mining, of which CRIPDES and its regional branches form part.

Early Saturday morning, young people from the communities of the CCR mounted their bicycles to tour the Department, raising awareness in every town they passed of the dangers of allowing Canadian mining companies Aura Resources Inc. (formerly Au Martinique Silver, Inc.) and Intrepid Minerals and their subsidiaries to develop mining projects in the region.

In addition to constant mobilizations by the rural communities affected by mining projects, specifically those in the CCR region of Chalatenango, the National Table Against Mining is working with lawyers to develop a Mining Law reform, in which metallic mineral mining would be banned in El Salvador. The draft of the mining law will be presented to the Legislative Assembly in a march planned for around Columbus Day.

The communities of the CCR have continued to carry out activities in protest of the Canadian mining companies' presence in Chalatenango, despite the declaration by Minister of the Environment Hugo Barrera that there would be no mining exploitation licences issued to any company because the Ministry did not have the resources to monitor the environmental impacts of mining. This has not dissuaded the mining companies from carrying out their exploration work.

Faced with the mining companies' continued presence in Chalatenango, Felipe Tobar, a long time community leader and current board president of the community of San Jose Las Flores, said that community members, in coordination with the CCR, have expanded their educational work to reach the entire Department of Chalatenango, including work with unorganized communities where the CCR does not currently have a presence.

In a recent meeting of the National Table Against Mining, Felipe Tobar reported that to date nobody in Chalatenango has sold their land to the mining company, thanks to the department-wide educational campaign community leaders have been carrying out since last year. The right of property owners to decide whether or not the mining company may operate in the region is seen as one of the few legal resources the communities have to keep mining companies off their lands under Salvadoran Mining Law. Exercising this right, the property owners in the communities of San Jose Las Flores, Arcatao, Los Amates, Guarjila, Ignacio Ellacuria, Carasque and others have combed their properties, searching out mining company markers and recovering them in the face of continued mining company exploration. “Because of this,” said Tobar, “it is more important than ever to strengthen our community organizing and protect our lands and communities.”