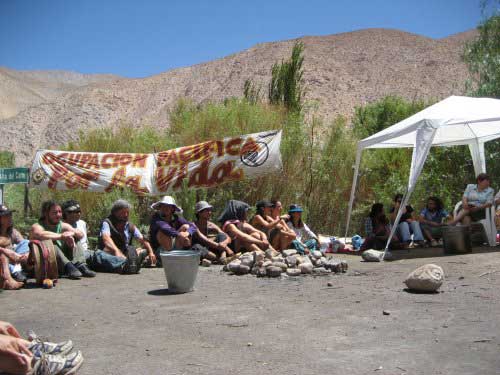 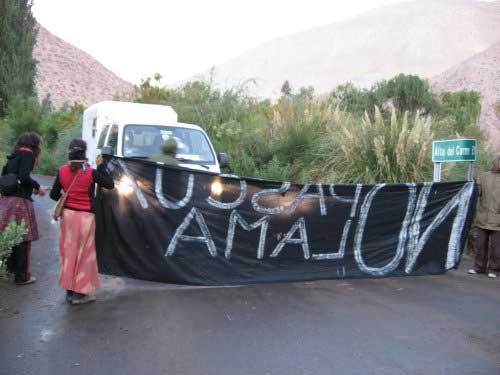 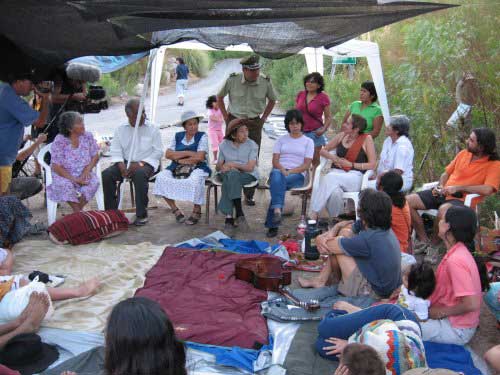 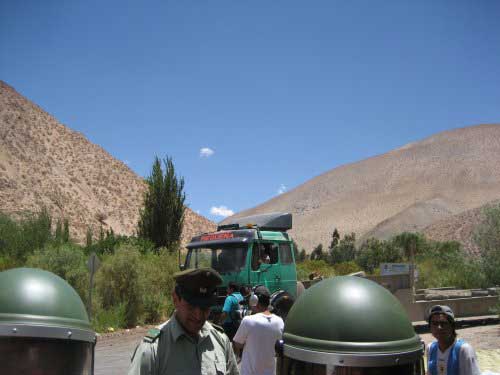 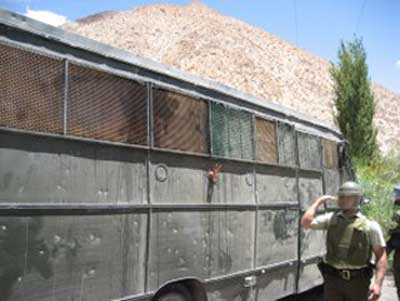 After the arrests by the federal police (Carabineros), the local community returned to re-take the intersection. The peaceful occupation and blockade of mining machinery will be maintained indefinitely.

More than 80 people peacefully closed the intersection of the roads to Chollay and Conay, in the community of Alto del Carmen, beginning the night of Monday, January 22. The objective of the action was to prevent the entrance of trucks and vehicles of the mining companies that operate there, specially of Barrick Gold ("Responsible Mining") and its Pascua Lama project. The blockade turned back all mining machinery since the roads are not adequate for heavy machinery - a situation noted by the Chilean Environmental Commission (CONAMA), who prohibited this type of transport but has not enforced the prohibition.

At 11:00 am on Thursday the 25th, between 30 and 40 Carabineros (military police) arrived, including special forces from Copiapó, by direct order of the Intendant of the Third Region (Atacama), to remove the demonstrators - which they proceeded to do at 2:00 pm. The people who had been blocking Barrick's vehicles resisted peacefully, linking arms until forced loose by military police officers. Upon arrest, the men were handcuffed and put on the police bus. Two of the 48 prisoners were minors and seven were foreigners. At least 60 people were at the blockade, including whole families, children, and one pregnant woman.

The prisoners were taken to the commissariat of Alto del Carmen and from there to Vallenar. They were freed after midnight, with charges of disorder in a public thoroughfare, although the foreigners were singled out for a "voluntary" procedure in which their documents were held by the authorities, obliging them to stay in the region at least two weeks. They were not allowed to make copies of their own declarations, and in the case of one French citizen, police altered his testimony and wanted him to sign their version and not the one he himself had written. All detainees were finally freed by about the 4:00 in the morning.

The local community, through the Defence Council of the Huasco Valley and the Church, monitored the release of the prisoners and was able to secure food and transport to satisfy the basic necessities even at those hours of the night. All the prisoners are well, although they reported injuries, mostly bruises and one sprained wrist.

The arrest procedure was irregular: the arrestees were not read their rights, and when at about 11 pm authorities said they would release the detainees if they signed a document that regularized the procedure, almost all the women refused to sign, because they had not been allowed to make any type of phone call, had not been informed of the reasons for their arrest, had not been allowed to contact lawyers or family members, and had been subject to illegal body searches.

Meanwhile, at the Chollay-Conay crossroads, once the peaceful blockade had been removed and police cleared the way for the illegal passage of earth-moving machinery (village organisations of the Transito Valley had obtained a ruling prohibiting the passage of these vehicles because of the inadequate roads), the local community returned to take the crossroads. The peaceful occupation and blockade of mining machinery will be maintained indefinitely.

Most of the arrestees, by decision in assembly, will return to support the occupation and work with solidarity networks. Village associations of Chollay, Conay, Los Tambos, Chigüinto, La Pampa, and other social organizations of the region have promised their support and are organizing food drives, information dissemination, and local activities in their own villages.

What You Can Do:

Write to Chilean national and regional authorities, with a copy to Canadian authorities, to urge them to respect the right of the communities of the Huasco Valley to express their opinions and demonstrate without repression; to respect the right of foreigners to protest mining projects that are international in their scope and impacts, and that they act to protect the interests of the communities -- not just those of Barrick Gold and the other transnational mining companies active in the region.

Please copy your messages to: