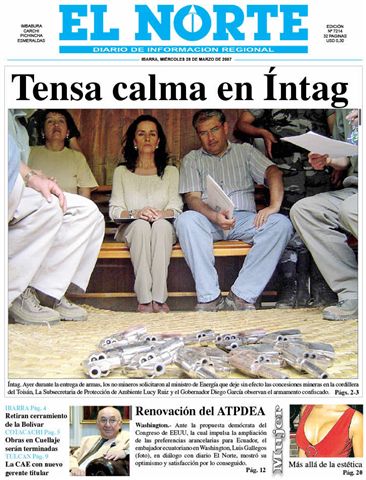 It took three months of protest by local communities and an intervention by the provincial Governor and two government ministries, but Ascendant Copper Corporation has agreed to curtail its activities in the Intag region of Imbabura Province in Ecuador.

On March 20, 2006, high-ranking police officials and representatives from Intag's communities and Intag Parish governments gathered at the office of the Governor of Imbabura Province in the city of Ibarra to witness the signing of an agreement between representatives of Ascendant Copper Corporation, the Ministry of Energy and Mines, and the Ministry of Government. The agreement calls for a 70% reduction in the company's work force in Intag and for the company to respect the December 9, 2006, order by the Ministry of Energy and Mines to stop work in the area until the Ministry has approved an environmental assessment for the project.

The commitment is a welcome move by the company to reduce tensions in the area, having previously ignored the stop work order. In statements to the local press, representatives from Intag made it clear that they see the agreement as a temporary measure meant to reduce the tension and conflicts until Ministry of Energy and Mines officials annul all of Ascendant's mining concessions in Intag, which they consider illegal.

In a separate agreement between the Intag's communities and the national government, the president of the Community Development Council, Polibio Perez, agreed to lift the communities’ road controls and to abandon the Chalguayacu Bajo property, which they have been peacefully occupying since April 14, 2006.

The Community Development Council also agreed to turn in any weapons under its control to government officials. Seventeen .38 calibre handguns and one semi-automatic 9-shot 12-guage shotgun had been seized from the 57 Ascendant “contractors” arrested by community members on December 4, 2006, when they tried to break through a blockade set up by local residents and force their way onto the company’s concession area. One community member was injured by gunfire in the incident. On March 27, the guns were handed over to the provincial prosecutor in a ceremony before the Subsecretary for Environmental Protection of the Ministry of Energy and Mines, Lucía Ruiz, Imbabura's governor, Diego García, and Ascendant representatives. Perez commented that the weapons apparently represented the “latest technology” that the company, which calls itself “a socially responsible corporate citizen”, has been touting for its mining projects. Another shotgun was reported to have been confiscated by the police from an Ascendant employee in the Chalguayacu Bajo area the day before.

In order to ensure compliance with both of the agreements, a monitoring group was formed, composed of representatives from Intag Parish (township) governments, the communities, the Ecuadorean government, and the company.

Inaccurate statements published by Ascendant Copper have claimed that the agreements guarantee free access to the area by Ascendant's personnel. The agreements do guarantee free access, but Ascendant and its employees and contractors are in fact still subject to the December 8 stop work order, which called for a halt to all of Ascendant's activities, and was not limited to mining activities. The communities and local governments are still firmly resisting the presence of Ascendant in the Intag area, and have vowed to do so until the company leaves.

Ascendant also fail to correctly identify the parties to the agreements, stating that the company met with "representatives of the ecological group opposing mining activities in the region", while in fact it was Polibio Pérez, the representative of the local Community Development Council (one of the dozens of community groups opposed to the mining project), that they met with, and who signed the agreement.

The agreements follow strong statements from Ecuadorean President Rafael Correa on March 14, condemning the chaos and social conflicts generated by transnational mining companies operating in Ecuador, and announcing that the government plans to reinstate royalties on the extraction of natural resources.

At the same time, Energy and Mines Minister Alberto Acosta promised that the government would review all mining concessions in the country and annul any concessions where irregularities were found. The validity of Ascendant’s Junín concessions has been challenged in court and is currently under investigation by the country’s anti-corruption commission. Acosta stated, "We are going to paralyze mining activities where confrontations take place. I am not going to allow bloodshed."