On December 26, 2009, Dora “Alicia” Recinos Sorto, 32, was assassinated, the second anti-mining activist killed this week in the small community of Nueva Trinidad in the department of Cabañas. Recinos Sorto was eight months pregnant and carrying her two-year old child when she was shot on her way back from doing laundry at a nearby river. She and her husband, José Santos Rodríguez, were outspoken opponents of the proposed El Dorado mine which Pacific Rim, a Vancouver-based mining company is desperate to open despite widespread community opposition. 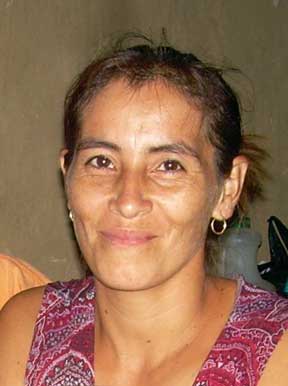 Rodríguez is a board member of the Environmental Committee of Cabañas, an organization that formed to educate the community about health and environmental risks of cyanide contamination from gold extraction.

The Committee's vice-president, Ramiro Rivera, was gunned down on December 20 despite having been under 24-hour police protection since being shot eight times in August. His wife, Felícita Echevarría, was also killed in the attack. Salvadoran President Mauricio Funes vowed to investigate the murders, stating, “I hope this case will not remain in impunity the way that so many others do.” These attacks follow the late June kidnapping, torture and assassination of Marcelo Rivera (no relation), in the nearby municipality of San Isidro.

Earlier this year, Recinos Sorto reported that her husband was receiving death threats and that unidentified men had come looking for him at their home. Oscar Menjívar, the man accused of shooting Rivera in August, had previously attacked Rodríguez with a small machete. Menjívar's neighbours report that he was one of Pacific Rim Mining's paid “promoters”. According to Rodríguez, “It is Pacific Rim who is responsible for this, because Oscar and I were great friends before they arrived. They are the source of all of this.”

The ongoing violence in Cabañas, including assaults, attempted kidnappings, and death threats, seems to be centred around the controversial presence of Pacific Rim Mining in the region, with prominent anti-mining leaders coming under attack. Pacific Rim ceased activity at the El Dorado site after local protests forced the company out and the Salvadoran government subsequently denied extraction permits. President Funes also stated his opposition to the project during his presidential campaign earlier this year and University of Central America polls show that over 62% of the population opposes gold mining.

In response, Pacific Rim opened an investor-state arbitration case against the Salvadoran government in April under the U.S.-Central America Free Trade Agreement, or CAFTA (Pacific Rim filed the suit through a recently acquired subsidiary, Pac Rim Cayman, based in Reno, Nevada.) According to Pacific Rim CEO Thomas Shrake, the company is seeking “hundreds of millions” of dollars in the arbitration, which is scheduled to begin in early 2010.  In November, Pacific Rim received notice from the New York Stock Exchange that it is in danger of being delisted after posting net losses for five straight years; the company then announced that it will seek to generate CDN $2.36 million by selling shares of stock to finance its legal case against the Salvadoran government. The company does not have any other mining projects in operation.

What You Can Do:

Please see "Urgent Action: Threats and Violence Against Community Leaders in Cabañas, El Salvador" for addresses of the relevant authorities to write to expressing your outrage that this has been permitted to happen, your concern for the safety of community activists in Cabañas, and urging that immediate steps be taken to investigate these murders, asaults, and threats, and to prevent more.

and the following two articles:

written by Jason Wallach on Upsidedownworld.org

Six days after heavily armed men took the life of a respected anti-mining activist in Cabañas, El Salvador, another prominent community leader has been assassinated. On December 26 at 3:30 pm Dora “Alicia” Recinos Sorto, 32, was killed as she returned from doing laundry at the river near her home in Cantón Trinidad, in the municipality of Sensuntepeque, Cabañas. “Alicia,” as she was known to friends, was carrying one of her children in her arms as she was shot dead. The child was shot in the foot and is receiving medical care.

Since 2005, many Cabañas residents like Recinos Sorto have been involved in a fierce battle over whether the US/Canadian Pacific Rim Mining Company can re-open the shuttered El Dorado gold mine. Late last year, outgoing President Tony Saca responded to local pressure and negated Pacific Rim’s permit applications for gold extraction. Activists are concerned that re-starting the mine will threaten local water supplies and ruin their ability to grow crops. Supporters—mostly Pacific Rim employees and their families—see the revival of the mine as a source of job creation and economic development.

Alicia Recinos Sorto together with her husband, José Santos Rodriguez, were active members of the Cabañas Environment Committee. Santos Rodriguez holds a position on the CEC Board and was attacked with a machete for his anti-mining views in May 2008. According to Hector Berríos of MUFRAS-32, the now-deceased Alicia recently told fellow CEC activists that armed men showed up at the couple’s home looking for her husband. She said that he had not been present at the time.

Recino Sorto’s murder has further shaken Cabañas, a region which was already reeling from the Dec. 20 killing of the Vice President of the Cabañas Environmental Committee (CEC), Ramiro Rivera. Rivera had been the target of a previous attacks and was under police protection at the time of his murder. The police presence, however, did not deter the hitmen, who rode up to the side of the Rivera’s pick-up as he drove and shot him repeatedly in the head and chest. A passenger in Rivera’s pick-up was killed and a teen girl was injured. According to elfaro.net, a fourth passenger escaped by running into the woods.

Information for this report was taken from a report by Hector Berríos, MUFRAS-32, previous UDW reports, and the recent Salvadoran press.

by Moira Peters on Mediacoop.ca

Nearly two years ago, he lost two fingers because he opposed a Canadian-owned gold mine in Cantina Trinidad, El Salvador. Yesterday, Jose Santos Rodriguez lost his wife, some say for the same reason.

Dora Alicia Sorto Recinos, 32, was shot and killed yesterday at 3:30 pm when she was returning home from doing laundry in a nearby river. She was eight months pregnant. Her son, who was accompanying her, was shot in the foot.

Santos Rodriguez is a farmer and active member of the Environmental Committee of Cabañas (CAC), a citizen group in opposition to Pacific Rim's proposed El Dorado gold mine. In April, 2008, he was attacked by Oscar Menjivar, a neighbour who had relationships with local mayors who supported the mine. In the attack, Menjivar cut off two of Santos Rodriguez' fingers with a machete.

According to a press release by Movimiento Unificado Francisco Sánchez-1932 (MUFRAS-32), Sorto Recinos had recently informed MUFRAS-32 that men with rifles had come to her house, looking for her husband. He was not home at the time.

The assassination of Sorto Recinos is the second murder this week of an opponent to Pacific Rim's proposed El Dorado mine, and the latest in a string of assassinations of civilian opponents to Canadian mining projects in Latin America.

Ramiro Rivera Gomez was shot and killed on December 20, in spite of 24-hour police protection.

MUFRAS-32 says the community is most alarmed by the lack of police investigation into these crimes.  There have been no arrests for Rivera Gomez' assassination, and the community sees only "the most serious lack of will in discovering the causes of these murders," according to the release.