Update (August 19, 2009): Mariano Abarca is safe and sound. Thank you to all who responded to the urgent action.

According to the latest reports, Mariano Abarca is being held by the Public Ministry in Tuxtla Gutiérrez; the armed men who abducted him seem to have been undercover police. He was not injured and is reportedly being held on charges of disturbing the peace, blocking public roads, organized crime, criminal association, and 200,000 pesos in damages, all relating to a blockade that Abarca and other residents have maintained against Blackfire Resources' mining operations since June of this year.

According to the Mexican Network of People Affected by Mining (REMA), Mariano's abduction and arrest, and the overblown charges, are clear attempts to criminalise legitimate protest, intimidate local people, and disrupt the group's planned August 29-30 meeting in Chicomuselo. REMA spokespeople say they are working to secure Abarca's release, and that the meeting will go ahead regardless.

Clearly the immediate local and international response have been very helpful in assuring Abarca's security. We are awaiting word from REMA as to what further actions are needed. 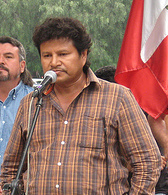 On Monday, August 17, 2009 at 12 noon, Mariano Abarca was kidnapped by armed individuals in unmarked cars as he left a primary public school in the municipal capital of Chicomuselo, Chiapas, Mexico.

Mr. Abarca and other members of the community were preparing to host a meeting of the Network of Mexican Communities Affected by Mining (REMA), to be held on August 29 and 30. The meeting will bring together communities affected by mining corporations in Chiapas and throughout Mexico.

We hold Municipal President Julio César Calderon, the municipal government of Chicomuselo, the Governor of the State of Chiapas, the Canadian Government, and the following Canadian multinational corporations responsible for the security of Mr. Abarca, his family and other members of the communities opposing destructive mining:

We demand respect for the human rights of Mariano Abarca and his community. We demand intervention by the State Commission of Human Rights and the immediate adoption of all means and measures necessary to ensure the safe return of Mr. Abarca to his family. We demand that the Government of Chiapas respect the rule of law.

Please send or reformulate the sample letter below to the addresses that follow:

I am deeply concerned for the safety of Mariano Abarca and other members of communities opposing Canadian mines in Chiapas. I am aware that Mr. Abarca was kidnapped by armed individuals in unmarked cars as he left a Primary Public School at the municipal capital of Chicomuselo on August 17, 2009. Mr. Abarca is an outspoken critic of destructive mines in Chiapas, and was preparing to organize a regional gathering of communities affected by mining corporations.

I urge you to launch an immediate investigation into the kidnapping of Sr. Abarca. I urge you to take the all means and measures necessary to ensure the safe return of Mr. Abarca to his family. I urge you to ensure that the Governments of Mexico, Chiapas and Chicomuselo respect the rule of law. I urge you to halt the operations of Blackfire and suspend further developments and/or the sale of concessions held by any other Canadian mining corporations in Chiapas until an impartial investigation is completed.

Communities in Mexico hold the right to free, prior and informed consent for any and all mining operations on their territories. Mine opponents have the right to carry out their activities without any restrictions or fear of reprisals, as set out in the UN Declaration on the Rights and Responsibilities of Individuals, Groups and Institutions to Promote and Protect Universally Recognized Human Rights and Fundamental Freedoms.

I thank you in advance for your attention and action to protect the human rights of communities facing Canadian mining projects and the human rights defenders working on mining issues in Mexico.

Addresses for sending the letter: