Demanding recognition after decade of inaction, still no land use plan for Drybones Bay area

February 6, 2012 – Today, the Yellowknives Dene First Nation filed a notice of application for judicial review in Federal Court to challenge the Mackenzie Valley Environmental Impact Review Board’s decision to allow a mining exploration program in Drybones Bay. Drybones Bay is an area of unparalleled cultural significance for the Yellowknives Dene.

Alex Debogorski’s mining exploration program in the Drybones Bay area is the 7th time the Yellowknives Dene have gone through an Environmental Assessment process relating to this area. Each time, the Yellowknives Dene have consistently objected to development in this very special place. The Drybones Bay area is of critical importance to the Yellowknives Dene, containing trails, cemeteries and historic village sites. It is the focus of intensive land use and is one of the few highly productive areas left where the First Nation’s members can practice their Aboriginal and Treaty Rights to hunt, trap, fish and gather on their ancestral lands.

In September, the Yellowknives Dene submitted a letter signed by every living chief to the Review Board: “Six times we've asked the Review Board to help protect this area, but we are still facing the same impacts, and this will continue until real measures and real mitigations are put into place".

Since 2003, the Review Board has asked the Federal Government to accommodate the Yellowknives Dene and mitigate the impacts in Drybones Bay by developing a plan for this area, in collaboration with Aboriginal peoples, before allowing further development. The Department of Aboriginal Affairs and Northern Development has had the better part of a decade to respond; it did nothing.

“The Yellowknives Dene support responsible mineral exploration and development. We know that this industry is important to our future, and we have supported three mines and many exploration projects,” said Chief Edward Sangris. “But this is one area we need to protect. The Drybones Bay area is extremely important to our people and more unplanned development there is a recipe for disaster.”

The Review Board’s decision on the Deborgorski project was released on January 6, 2012. Despite mountains of evidence, and unfulfilled recommendations from its own previous decisions, the Review Board concluded that the proposed exploration “is not likely to have any significant adverse impact on the environment or to be cause of significant public concern”. Nothing could be further from the truth. According to the court challenge, the Crown breached its constitutional duty to consult and accommodate the First Nation, and the Review Board’s decision was legally wrong.

Had either the Federal Government or the Review Board fulfilled their duties, the Yellowknives Dene could have avoided the burden of going to court to seek justice.

“At this rate, our land will be gone before our Treaty claims process is settled,” said Chief Sangris. “We need a plan in place for the Drybones Bay area before it’s too late. A plan could also bring certainty and clarity to developers. But as it stands, we have zero accommodation for our rights and interests in the most critical part of the Chief Drygeese territory.”

Chief Sangris is available for comment, and can be reached via executive assistant Shannon Gault: (867) 873-4307

The Yellowknives Dene First Nation (YKDFN) is asking the court to set aside the Environmental Assessment (EA) decision for Debogorski and obtain guidance from the Federal Court on the following:

1)    Procedural Grounds: The Review Board process was significantly abridged from its usual form as laid out in the EA guidelines and completed in a manner that is inconsistent with previous decisions.

3)    Constitutional Grounds: That the Crown has not undertaken any Consultation or Accommodation with the Yellowknives Dene First Nation despite being asked to do so.

In February of 2011, Alex Debogorski submitted an application for an exploration program to the Mackenzie Valley Land and Water Board. The permit area is located in the Drybones Bay area, which has previously been the focus of six environmental assessments, two of which are still ongoing as the Minister has yet to respond.

The Drybones Bay area is of critical importance to the Yellowknives Dene and contains trails, cemeteries and is the focus of intensive land use. This site has been a critical area for the YKDFN for generations, with some of the highest density of heritage and archaeological artifacts found in the North. Today it is also one of the few accessible and highly productive areas left in which the First Nation can exercise their treaty rights.

The Yellowknives Dene participated in the previous environmental assessments. The projects were permitted with recommendations and suggestions to mitigate the impacts. However, the suggestions that the Board has made in the past have been ignored by the Federal Government and the Board. The critically important management based Measures from the 2007 EAs, such as Land Use Planning, have already been refused by the Minister. In December 2011, the Board reviewed these Measures and re-affirmed their determination that the cultural cumulative impacts in Drybones Bay are at a critical threshold and only the imposition of a suite of management actions would mitigate these from becoming significant.

The YKDFN strongly believe that these impacts are already significant. Our members, Elders and leadership have given evidence to the Board how this area is essential to the well being of the community. With that they have also repeatedly expressed how they feel that they are being pushed off this land. YKDFN’s message about Drybones Bay has been consistent through the years of regulatory processes, with little meaningful response from responsible authorities. In the most recent EA report the Board highlights the lack of progress despite the commitments from the Federal Government.

In addition to the cumulative cultural impacts, there have been real environmental impacts from the other exploration programs in the area. Any impacts are magnified by the significance of the area, such that small events have serious consequences. For instance, when an exploration program approved through another EA started a forest fire in 2007, the result was a destroyed cemetery, degraded habitat, and a $330,000 bill for the taxpayers.

The Debogorski Environmental Assessment is the 7th for the Drybones Bay area. The first four occurred in 2003/04, two more commenced in 2005 and are still ongoing. At present, there are several other mineral claim and lease holders in the area who have not yet applied for permits. If AANDC pushes the holders to apply for land use permits, as they did in this case, a new wave of applications should be forthcoming.

The Yellowknives Dene are not against development – we are against irresponsible development. Uncontrolled and unplanned development on our most important lands is irresponsible. However, the Department of Aboriginal Affairs and Northern Development seems to be quite content with the continuation of the status quo, allowing further impacts to the land ongoing absent of any mitigation or management.

During the last decade, the Yellowknives Dene have seen the establishment of three mines, the application from three other mine developments, and dozens of exploration programs. In the absence of AANDC guidance or leadership, we have developed an Exploration Agreement to clarify the responsibilities and expectations of parties during Consultation. We are working with the NWT Chamber of Mines to update and improve this tool. We know that mining is a part of our future and the Yellowknives Dene will continue to develop respectful relationships.

If either the Federal Government or the Review Board had fulfilled their duties, then this judicial review could have been avoided and all parties would have had certainty and clarity throughout the regulatory process. However, the decision in the Debogorski EA ignored the evidence before the Review Board and now the Yellowknives have the burden of going to court to seek justice. 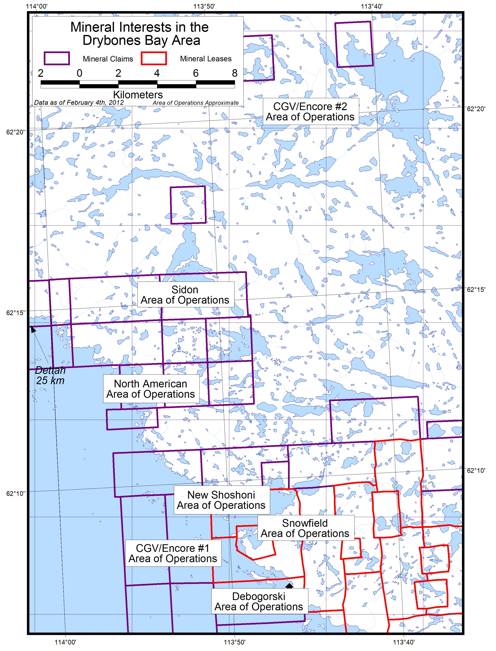