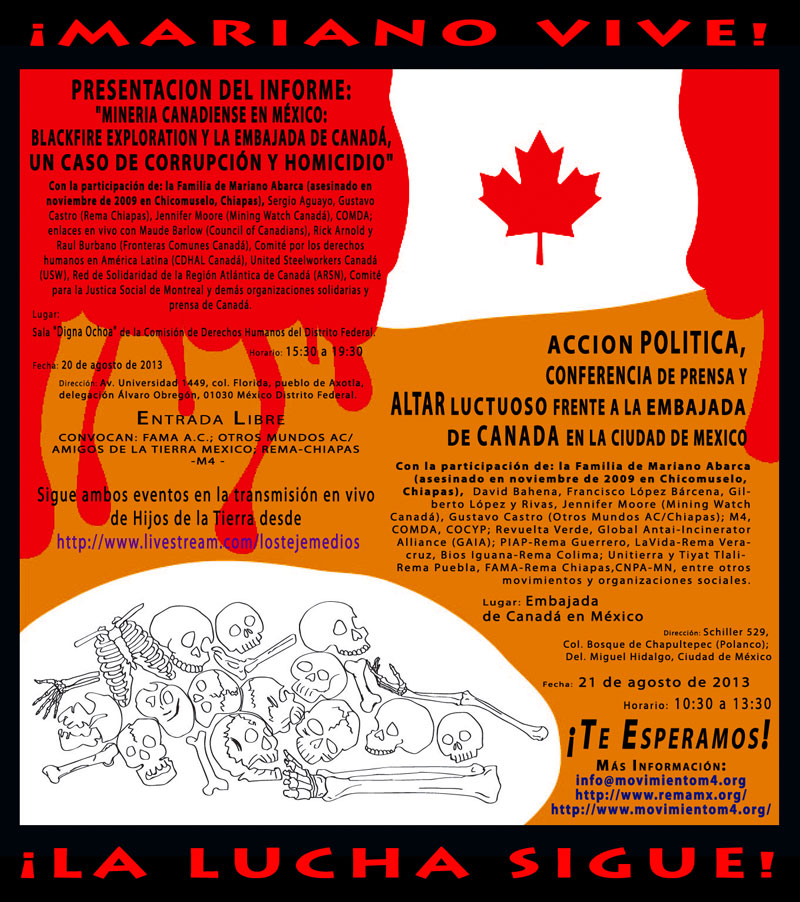 WHAT: On August 20 and 21, the family of murdered Chiapaneco activist Mariano Abarca from the municipality of Chicomuselo where Blackfire Exploration carried out barite mining activities between 2007 and 2010 will launch the report “Corruption, Murder and Canadian Mining in Mexico: The Case of Blackfire Exploration and the Canadian Embassy” in Mexico City and be available for comments to the press.

WHO: The family of murdered activist Mariano Abarca, academic and human rights activist Sergio Aguayo Quezada and activist Gustavo Castro from the organization Otros Mundos-Chiapas, also member of the Chiapas group of the Mexican Network of Mining-Affected Communities (REMA-Chiapas by its initials in Spanish) will present the report. Canadian organizations including the Committee for Human Rights in Latin America of Montreal (CDHAL by its initials in French), Common Frontiers, the Council of Canadians, MiningWatch Canada and the United Steelworkers will also participate.

Organized by the Environmental Foundation “Mariano Abarca” (FAMA by its initials in Spanish), Otros Mundos-Chiapas, Friends of the Earth-Mexico and REMA-Chiapas.

Both events will be live broadcast by Hijos de la Tierra at: http://www.livestream.com/lostejemedios

WHY: The report presents findings of an analysis of hundreds of pages of documents obtained through an access to information request to the Department of Foreign Affairs, revealing how the Canadian Embassy in Mexico put considerable public resources at the service of Calgary-based Blackfire Exploration despite connections with suspects in the murder of Mariano Abarca, suspension of the company’s mine on environmental grounds, and widely reported allegations of corruption. The family of Mariano Abarca will present the report and seek a response from the Canadian Embassy to ensure justice is obtained in this case and that Canada adopts corporate accountability measures in accord with its international human rights obligations.