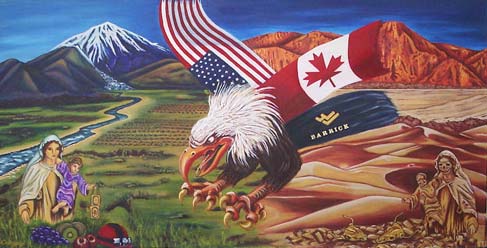 (Toronto) As Barrick Gold struggles with deepening financial and management crises, it is time to squarely recognize the relationship between the decline of the corporation and the environmental and human rights abuses at Barrick projects around the world – which are protested against yearly outside and inside the annual shareholder meeting.

This year the Barrick Annual General Meeting will undoubtedly be dominated by the overdue departure of company founder and co-chair Peter Munk, as well as by this week’s exchange of blame and insults between Barrick and US mining giant Newmont over their failed merger talks. But the AGM also takes place in the shadow of a recently filed notice of action for a 6 billion dollar shareholder class action suit in Canada that claims the company and several of its senior executives did not disclose the problems that eventually led to huge cost overruns at its Pascua Lama project in Chile in a timely fashion. These “problems” were both environmental in nature, rooted in concern for impacts of the project on downstream water resources, and driven by persistent multi-year protest by downstream indigenous communities whose concerns were responded to favourably by the Supreme Court of Chile and by environmental regulators, leading to project delays, cost overruns, and costly fines.

“This is a perfect illustration where shareholders were given every opportunity to know that the Pascua Lama project was in trouble, had they but paid attention to the protest outside and statements inside the AGM where members of the Diaguita Huascoaltinos came from Chile to protest the project,” says Catherine Coumans of MiningWatch Canada, who attends the AGM and protests yearly. “Their presence, and the information groups like MiningWatch published on their plight, should have been a warning sign that all is not well and shareholders should have been questioning Barrick about local dissent and environmental concerns.”

This week, another highly troubled Barrick project, in Papua New Guinea (PNG), is erupting in violence again, as the State has declared a state of emergency and reportedly sent over 100 special police forces and soldiers to the mine site to counter incursions into the mine by poor people seeking gold. In 2009, when a similar police action was ordered, at least 300 houses of local indigenous people were burnt down, prompting an investigation by Amnesty International, who declared the actions a gross violation of human rights.

“Again, shareholders who are paying attention will remember that for four years between 2008 and 2011, indigenous Ipili people travelled from PNG to attend and speak at Barrick’s AGM about systemic and long-standing violence by mine security guards and special police units who raped and gang-raped local women and shot at local men,” says Coumans. “After years of denial, Barrick is now trying to get victims to sign away their legal rights in return for small benefit packages, but as the violence continues legal action remains a possibility.”

Other risks associated with human rights abuses, severe environmental degradation, and lawsuits related to these that shareholders should be concerned about include:

“The above mentioned concerns at Barrick mines really just scratch the surface,” says Coumans, “but we hope that shareholders will start to dig a little deeper to get behind the glossy reports and slick presentations to better understand the real risks from environmental damage and human rights abuses that local people face at many of these mines. Their suffering is an unacceptable result of Barrick’s mines, and therefore creates risk for shareholders.”

As in past years, Catherine Coumans of MiningWatch will be at the Barrick AGM on April 30, 2014 and available to answer questions.