(Ottawa) Nearly 150,000 people have already signed an online petition directed at the Australian-Canadian firm OceanaGold urging it to drop its suit against El Salvador.

Secret hearings will begin on the case at a little known investment dispute tribunal housed at the World Bank in Washington, on Monday, September 15th. 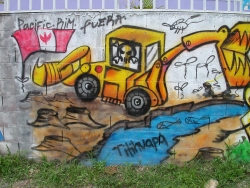 OceanaGold bought into the suit when it purchased Vancouver-based Pacific Rim Mining at a firesale price last fall. Pacific Rim’s only project in recent years had been to punish El Salvador with legal proceedings for not having granted it a mine permit. The company is suing for $301 million, despite never having fulfilled the basic regulatory requirements to obtain a licence to build its El Dorado gold mine. The government of El Salvador has already spent millions fighting this case — money the tiny Central American country urgently needs for social programs and infrastructure.

A rejoinder filed this July by the state of El Salvador with the International Center for the Settlement of Investment Disputes (ICSID), where the case will be heard, outlines three prerequisites that Pacific Rim Mining failed to meet.

The same document describes how company directors preferred to lobby for changes to El Salvador’s mining law – including appealing to the Pope – rather than live up to national norms.

For the last decade, mining-affected communities and broad segments of Salvadoran civil society, including the highest echelons of the Catholic Church, have categorically opposed industrial mining in El Salvador due to concerns that it would contaminate the country’s most important water source, the Lempa watershed. In 2008, the Salvadoran government introduced a de facto moratorium on large-scale mining that two successive administrations have maintained.

Protests and petitions calling on the company to drop its suit take place today in Toronto and will continue in Canada, the US and Australia throughout the month of September. A list of planned actions is available online here.

For contacts and more information: