(Ottawa) On Thursday, a group of Ottawa-based organizations wrote a letter urging the Australian High Commissioner to work with the Australian government and pressure Melbourne-based OceanaGold to drop its $301 million lawsuit against El Salvador. Hearings on the suit began this week at the World Bank’s International Centre for Settlement of Investment Disputes (ICSID) in Washington. 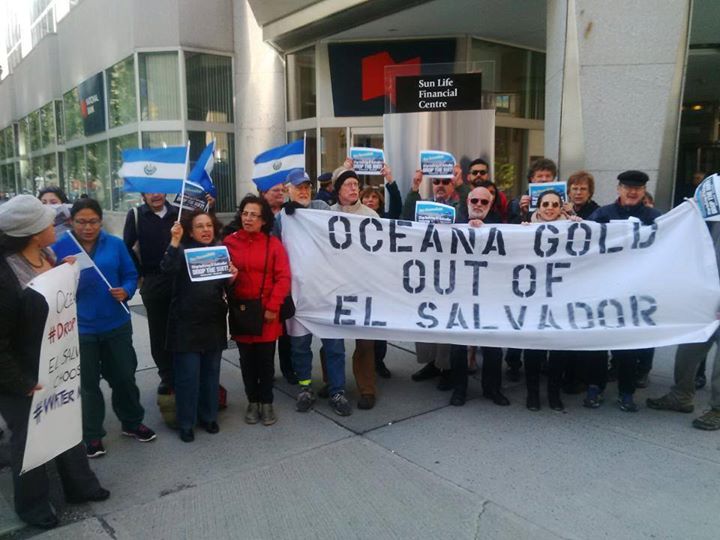 Australian-Canadian OceanaGold is using its lawsuit to punish El Salvador for having put in place a de facto moratorium on large-scale mining in response to community opposition to the company’s project and nationwide concern over the environmental risks that mining poses to the vital Lempa River watershed.

“Given the Australian Government’s current position to not sign any investor protection agreements that would allow foreign corporations to sue Australia for its public policy decisions, we hope that the High Commissioner will sympathize with El Salvador’s plight,” remarked René Guerra Salazar, Executive Director of SalvAide.

OceanaGold took on the lawsuit when it purchased Vancouver-based Pacific Rim Mining in fall 2013, narrowly rescuing the Candian firm from bankruptcy. Pacific Rim’s only mining project at the time was to sue the Salvadoran government.

“Pacific Rim Mining never complied with El Salvador’s environmental permitting protocols to obtain a licence for its El Dorado project. Rather, the company thought it could get its way by lobbying to loosen regulations. But when the Salvadoran government responded to the public interest instead, it launched this unjust suit as a last ditch effort to try bully the country into submission,” observed Jamie Kneen, Communications Coordinator for MiningWatch Canada.

Pacific Rim moved a Caymans Islands subsidiary to Nevada to launch its multi-million dollar attack under the US-Dominican Republic-Central American Free Trade Agreement (DR-CAFTA) and a national investment law in El Salvador. ICSID rejected the claim under DR-CAFTA but allowed the company to continue under the Salvadoran investment legislation. El Salvador has since amended this legislation to prevent similar suits in the future.

“Given the shared experience in standing up to foreign multinationals, we hope the Australian government will join with tens of thousands around the world in demanding that OceanaGold respect El Salvador’s national sovereignty and immediately withdraw its $301 million claim against the people of El Salvador,” reads the letter.

“Local democratic institutions, not corporate bullying, should prevail over matters of such high public interest,” states Meera Karunananthan for the Council of Canadians.

“Sadly, the Canadian Government doesn’t recognize this and continues to sign more and more agreements - such as the Canada China Foreign Investor Protection Agreement finalized last Friday without debate - putting the public interest at risk here in Canada too,” she concludes.