(Ottawa/Toronto/Montreal) Canadian mining company Tahoe Resources and the Guatemalan government have used repression, criminalization and militarization to try to silence resistance to the company’s Escobal mine project, according to a forthcoming report from Guatemalan investigative journalist Luis Solano.

Solano will be in Canada from November 9 to 13, to present his findings about the militarization of communities in the area of the Escobal mine project, located in southeastern Guatemala. Events will be taking place in Ottawa, Toronto and Montreal.

For five years, communities affected by Tahoe Resources’ Escobal mine have been peacefully defending their lands and livelihoods. Multiple plebiscites have been organized in which more than 55,000 people in seven municipalities have voted against the silver mine and proposed expansion plans. Despite their clear message, the company and the Guatemalan government, with tacit support from the Canadian Embassy, have continued to impose the project.

“The company has employed US and Latin American security contractors to design a militarized security strategy oriented to keep down local opposition to its mine,” remarks Luis Solano.

“The Guatemalan government has collaborated closely with the company to implement a counterinsurgency strategy that defines people who are peacefully defending their agricultural ways of life as a threat to national security and a target for military control and surveillance.”

The result has been persistent violence and conflict, including one incident for which Tahoe Resources is now being sued in the Supreme Court of British Columbia. Norway’s Council on Ethics cited the risk of further human rights violations earlier this year when it recommended against investment in Tahoe Resources.

Luis Solano is author of the book ‘Oil, Mining and Power in Guatemala’, as well as an economist and political analyst. He works as an investigative journalist writing for diverse media outlets and organizations, such as Inforpress Centroamericana, El Observador and Plaza Pública.

MiningWatch Canada and the International Platform against Impunity commissioned his forthcoming report on the militarization of communities around Tahoe Resources’ Escobal project. He will travel to Geneva to present the report following his visit to Canada.

Solano’s findings are illustrative of a broader trend of the intensifying criminalization of mining-affected communities and their allies in connection with Canadian interests in Guatemala and the Americas, as documented by MiningWatch Canada, the International Civil Liberties Monitoring Group (ICLMG) and Voices-Voix.

“Increasingly, mining-affected communities and organizations that support them are being treated as if they are national security threats when they stand up for their land, water and ways of life,” remarks Jen Moore, Latin America Program Coordinator for MiningWatch Canada. “Meanwhile, with laws and government supports stacked in their favour, Canadian mining companies operating around the world continue to cause great harm and get away with it.”

Between November 9 and 13, Luis Solano will travel to Ottawa, Toronto and Montreal for public events and meetings. He will be available to speak with media.

For more information or to arrange an interview, contact: 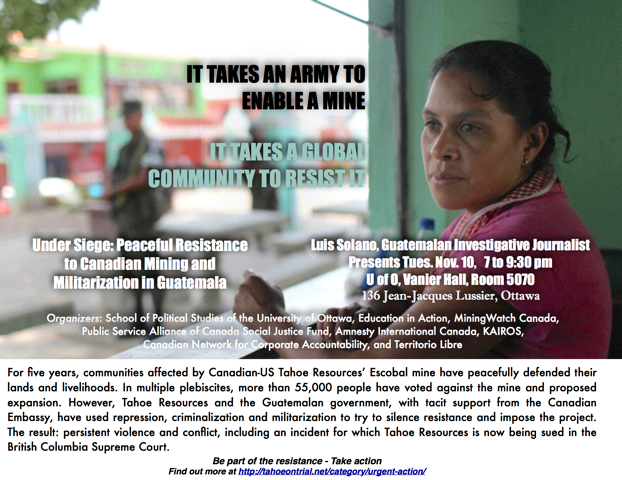