Ecuador: Girón advances toward a community plebiscite to stop mining in Kimsacocha

(Quito/Ottawa) Members of the Union of Community Water Systems in Girón County (UNAGUA-Girón) in the south-central province of Azuay, Ecuador are collecting signatures in order to undertake a community plebiscite to decide the future of the mining project “Loma Larga” owned by Canadian mining company INV Metals in the area of Kimsacocha.

In April 2012, a group of residents from Girón presented a request to the Provincial Office of the National Electoral Council (NEC). On January 29, 2015, more than two and a half years later, the NEC provided the official forms with which to collect signatures. By law, UNAGUA-Girón must collect at least 10% of the names in the county’s electoral registry in order to take the next step toward a plebiscite.

To date, UNAGUA-Girón, with support from the Federation of Campesino and Indigenous Organizations of Ecuador (FOA), the highland Indigenous federation ECUARUNARI and the YASunidos of Guapondelig Collective, has gathered some 2,000 signatures, above the minimum requirement of roughly 1,500 names.

Representative of UNAGUA-Girón, Vicente Ramón, emphasized the importance of this initiative to prevent mining activities in the wetlands and fragile high altitude ecosystem known as páramo in Kimsacocha. ECUARUNARI President Carlos Pérez has stated that the community plebiscite is important so that “it is not just a few, but rather thousands at the ballot boxes who decide what is more important: gold or water.”

On July 29, 2015, the organizations promoting the plebiscite will present the lists of signatures to the electoral authority for verification, who will then report on whether they fulfill the requirements or not. Following this, the Constitutional Court will determine if the question is constitutional: “Are you in agreement with mining activities in the páramo and water supplies that make up the Kimsacocha (Quimsacocha) hydrological system? Yes… No…”.

The organizations promoting this plebiscite have denounced a possible boycott of the sign-up process given confusion created locally as the result of a counter-plebiscite that has emerged in favour of mining. The United for Development Collective received approval from the National Electoral Council in March 2015 to begin collecting signatures in Girón, less than a week after having made the request. The same week, Vice President Jorge Glass visited Girón to declare his support for INV Metals’ project and denounced supporters of UNAGUA-Girón’s plebiscite.

“There is a striking contrast between the years that it took the Electoral Council to provide UNAGUA-Giron with the forms to collect signatures for its plebiscite and the urgency with which it approved the counter-plebiscite. This is evidence of partiality in the process, which is compounded by the government’s efforts to stigmatize the communities and organizations acting in defence of water and their wellbeing against the imposition of this mining project,” remarked Jen Moore for MiningWatch Canada.

Kimsacocha is located in the Western Andes, south of the city of Cuenca in the south-central province of Azuay, Ecuador. With a surface area of 10,226.85 hectares, it is situated in the divide between two large watersheds (Jubones and Santiago). High altitude wetlands in this area, known as páramo, are important sources of water for the counties of Cuenca, San Fernando, Girón and Santa Isabel.

INV Metals’ Loma Larga mining project consists of 8,030 hectares of mining concessions in the area. Canadian mining company IAMGOLD owned this project until 2012 when it was sold to INV Metals. However, IAMGOLD retains an interest today as the principal shareholder in INV Metals, with 47% of its shares.

Since 2004, downstream campesino and Indigenous communities have opposed this project given possible impacts on their water, biodiversity, integrity and quality of land, and sovereignty over this territory.

In April 2008, the National Constituent Assembly decreed a “Mining Mandate” that ordered all mining concessions in the country to be revoked without economic compensation that affect water supplies, protected areas and that had not been previously consulted with affected communities. This decree was never fully applied to IAMGOLD’s concessions, leaving the project largely intact. Given that the Mining Mandate remains in effect, MiningWatch Canada and the Environmental Defenders Law Center (EDLC) have made a submission to Ecuador’s Constitutional Court arguing that the mining concessions owned by INV Metals/IAMGOLD are illegal and should be annulled.

In October 2011, the assembly of the Community Water System of Tarqui and Victoria del Portete in the county of Cuenca undertook a community plebiscite over mining activities in Kimsacocha. 92.38% of those who participated voted against mining. 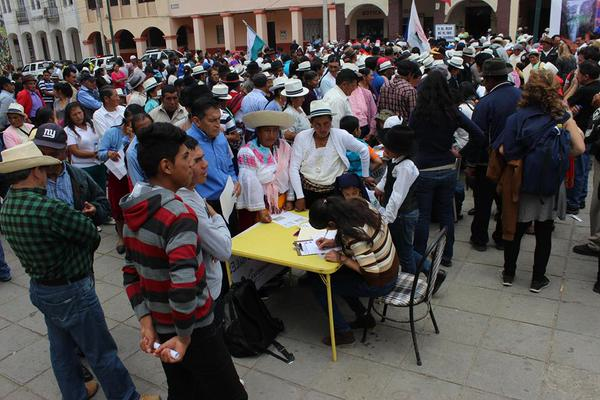