SINGAPORE, September 29, 2015 | As the deep sea mining industry chases investors at the Asia Pacific Deep Sea Mining Summit, a new critique by the Deep Sea Mining Campaign reveals indefensible flaws in the Environmental and Social Benchmarking Analysis of the Solwara 1 project commissioned by Nautilus Minerals. The proposed Solwara 1 deep sea mine, situated in the Bismarck Sea of Papua New Guinea, is the world’s first to receive an operating licence.

Endorsed by a coalition of economists, scientists, non-government organizations and civil society groups, the critique, entitled Accountability Zero, will be launched by Professor Richard Steiner during his presentation at the Summit today.

“By using metrics that bear no relevance to deep sea and marine environments, the Solwara 1 ESBA values at zero the ecosystem goods and services provided by deep sea and marine ecosystems.” said Francis Grey, founder of Economists at Large and co-author of Accountability Zero. He continued, “Fundamentally, the ESBA report fails to meet the well accepted requirements of a cost-benefit analysis. It is of little value to public policy and deep sea mining (DSM) decision-making.”

“Comparing the impacts of Solwara 1 to selectively chosen land-based mines is like comparing apples to oranges,” said Payal Sampat, Mining Program Director of Earthworks. She continued, “Nautilus commissioned a study that purports to make a case for seabed mining – but which neglects to value marine ecosystem services, or to consider the likely impacts on sea water quality, marine ecosystems, or communities who depend on healthy oceans.”

The Solwara 1 deep sea mining project has been met with local and international opposition, including three independent science-based reports that detail deficiencies in the science and modelling employed by Nautilus.[1]

“The ESBA is not fit for its intended purpose. It fails to provide a framework to assist decisions about the advisability of Solwara 1 or of any other deep sea mining project. Indeed, the use of the ESBA for decision-making purposes would lead to very poor public policy outcomes. The risk of unexpected costs and losses due to unpredicted environmental and social impacts is high and could leave coastal and island communities carrying the brunt of the burden into the long term,” said Dr. Helen Rosenbaum, Coordinator of the Deep Sea Mining Campaign and co-author of the Accountability Zero critique.

Granted a 20-year mining licence in January 2011, Nautilus has yet to release the environmental management plan for Solwara 1.

“The time for public relation exercises such as the Solwara 1 ESBA is over. Investors, civil society, and governments looking at the world’s first deep sea mine need to see real substance. The release of the Solwara 1 Environmental Management Plan would be a good step,” said Professor Richard Steiner of Oasis Earth. He continued, “It is critical that this foundation document be subject to independent examination and feedback in the public domain.”

Key failings of the ESBA highlighted in the critique include:

The Deep Sea Mining (DSM) Campaign is an association of NGOs and citizens from the Pacific, Australia, Canada and the US concerned about the likely impacts of DSM on marine and coastal ecosystems and human communities.

Economists at Large are a team of economists working to create a sustainable economy, society and environment.

Earthworks is a US-based nonprofit organization dedicated to protecting communities and the environment from the adverse impacts of mineral and energy development while promoting sustainable solutions.

MiningWatch Canada is a pan-Canadian initiative supported by environmental, social justice, Aboriginal and labour organisations from across Canada.

Oasis Earth is a marine conservation consulting organization based in Anchorage, Alaska, providing technical advisory services regarding ocean conservation issues to governments, industry, NGOs, and civil society around the world. 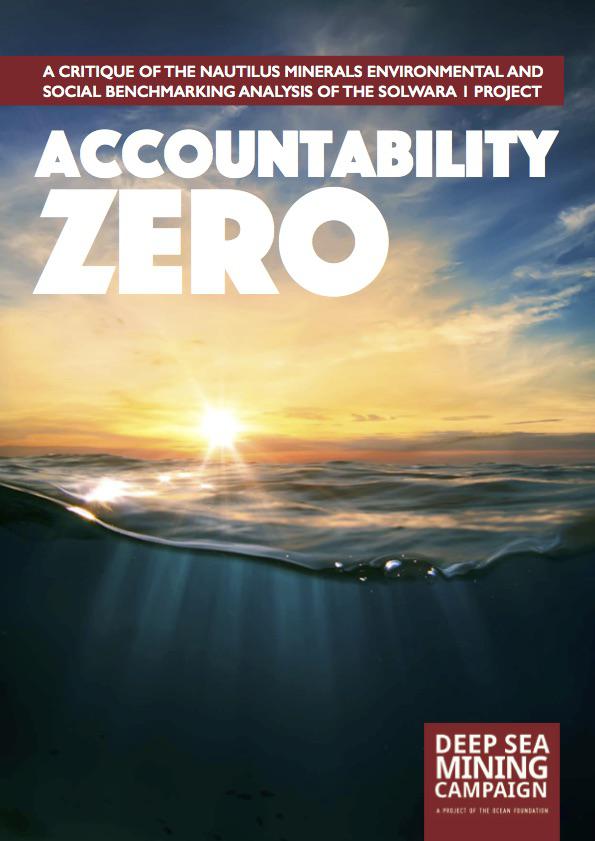