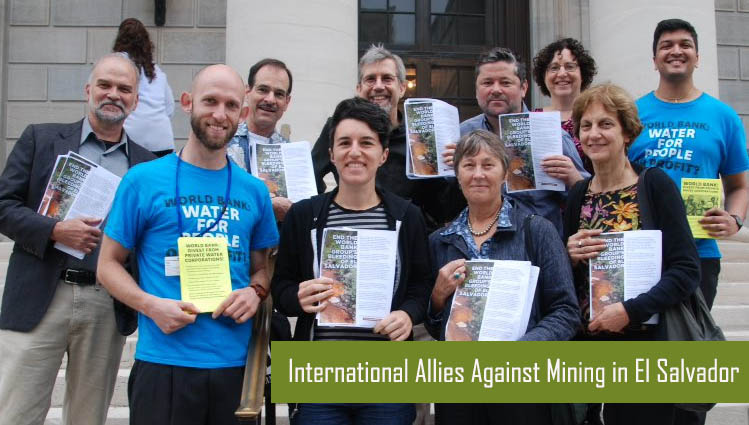 After over seven years and millions of dollars of expenses, the controversial World Bank Group-based tribunal that has been hearing the case of PacRim Cayman vs. El Salvador will make its decision on the case public on Friday, October 14, in Washington, D.C.

Dozens of groups in El Salvador, the United States, Canada, Australia, and the Philippines, which have supported El Salvador's decision to stop issuing new mining licences, have been urging the tribunal to drop the case or to issue a ruling against the mining company. These groups, which came together in a network called International Allies (www.stopesmining.org) after the lawsuit was introduced in 2009, held protest actions in the different countries on Friday, October 7. Videos from the actions are below.

International Allies has supported the work of a national roundtable of organizations in El Salvador (La Mesa), which has opposed mining in the country and which has rallied the overwhelming majority of the public against mining. A 2015 poll commissioned by the University of Central America found close to four-fifths of Salvadorans opposed to mining. El Salvador has one major watershed, the Lempa River, which supplies water for over half the country's population. The river would be threatened by the toxic chemicals used in gold mining.

La Mesa and International Allies will release statements after the decision is released by the International Centre for Settlement of Investment Disputes (ICSID) on Friday, October 14, and leaders of these groups will be available to the press for comment.