Is Ivanhoe Mining Informing its Shareholders of Ivanplats’ Real Risks, Liabilities, and Irregularities?

(Ottawa) Ahead of Ivanhoe Mines’ annual shareholders’ meeting tomorrow in Vancouver, community representatives and activists are asking if shareholders are prepared to condone the human rights abuses and illegal operations that they allege the company is responsible for as it pushes ahead with development of its Ivanplats (Platreefs) project in South Africa.

Community representatives from Mokopane, Limpopo Province, assert that the government has unlawfully granted the Canadian company permits for the relocation of hundreds of ancestral graves in an area excluded from its designated mining area. The community has protested to the government and the Canadian High Commission against the violation of graves and the lack of enforcement of laws and customary rules protecting them. Derrick Tsita, spokesperson for Mokopane Interested and Affected Communities Committee (MIACC) says, “The granting of these permits is a final insult to our human rights and our human dignity.” Community members were further outraged when they recently learned that Ivanplats has stocked its office in Mokopane with cheap coffins – normally used for paupers’ funerals – for use in these reburials.

The permits were issued despite Ivanplats not having obtained written consent from the community in terms of its customary and administrative practices, as recognised by the South African Constitution. Written consent is an express prerequisite under national legislation meant to provide communities the right to participate in decision-making processes in matters that directly affect them.

Community members who have spoken out about their concerns have faced violence, including the attempted assassination of community representatives Holly Maponya and Charlotte Chaba on April 18 of this year, and the May 9th assault of Nomsa Magongoa. All three have been actively asserting their customary rights to consent to development, and demanding compensation for lost livelihoods.

Customary representative Aubrey Langa explains, “We believe that the attempted assassination of Mr. Maponya is linked to his and other community representatives’ successful derailing of Ivanplats’ efforts to get the mine site included in the approved mining rights area without fulfilling the legal prerequisites. Mr. Maponya and his Kopano Formation Committee have been a thorn in the side of Ivanplats. As an outspoken critic of the Ivanplats project, many members of Kopano believe that the plot to assassinate him was related to Ivanplats’ presence.”

Adds Langa, “It would be irresponsible to state that Ivanplats directly ordered the hit on Mr. Holly Maponya. What is sure, and we say this with confidence, is that corrupt elements believed to be acting in the interest of Ivanplats are directly involved.”

Further aggravating the situation, a protest march planned to coincide with Ivanhoe’s Annual General Meeting was frustrated by the refusal of the local authority, the Chief Magistrate of Mahwelereng, to grant a protest permit. Magistrates Charity Kekana and Solly Kekana had already shunted the protest application, leading to further concerns of complicity or even potential collusion. “Mrs. Charity Kekana is a common law wife of Chief L. V. Kekana, and Mr. Solly Kekana is an uncle of Mr. Sello Kekana, Senior Manager for Ivanplats,” points out Derrick Tsita. “Are we being intentionally and strategically prevented from obtaining the protest permit in time?”

Of central concern in this protest is that, contrary to its environmental permit, Ivanplats is blasting within a buffer zone of 500 metres meant to protect residential structures in the village of Kgobudi. Salome Mabate from Kgobudi commented, “I wish I could find a spokesperson to address the meeting and billionaire Mr. Robert Friedland directly about blasting activities that Ivanplats conducted in the dead of the night.”

Shimane Kekana, a member of the Kopano Formation Committee, adds, “Unmitigated impact of ancestral burial grounds and graves is another contentious issue with Friedland, where officials and politicians seem to consistently look the other way in response to complaints that Ivanplats is violating terms and conditions of its mining and environmental authorisations. Key to this is that Ivanplats is allowed to conduct mining operations on a site for which it does not have valid mining and environmental permits because these have been expressly excluded under the terms of these concessions.”

The construction site is excluded from the permitted mining right area because of residential structures within the buffer zone, and the presence of more than 150 graves within the site. As a matter of principle, the South African Heritage Resources Agency (SAHRA) is obliged to deny approvals at this site if there is a qualifying alternative site where heritage resources are not found. As a result, community representatives assert that SAHRA should not have allowed Ivanplats to construct a shaft where it is currently doing so. SAHRA is only a “commenting authority” regarding mining activities; state authorities regulating mining and environmental matters are obliged to take the lead in prosecuting abuses of laws that SAHRA administers. Community representatives also argue that it was premature for these departments to grant mining and environmental permits before SAHRA had made a decision to approve the site for mine development.

In response, the Canadian people and government must act to ensure justice for human rights abuses associated with Canadian companies operating abroad and that the rights and interests of vulnerable people be protected and promoted.

“Ivanplats’ shareholders should demand to be fully informed of the legal status of the company’s access and occupation of 430 hectares of land, its mining licence, and compliance with community land rights and customary law as enshrined in the South African constitution,” says Jamie Kneen for MiningWatch Canada.

Department of Mineral Resources - Request for Investigation of Allegations of Impropriety 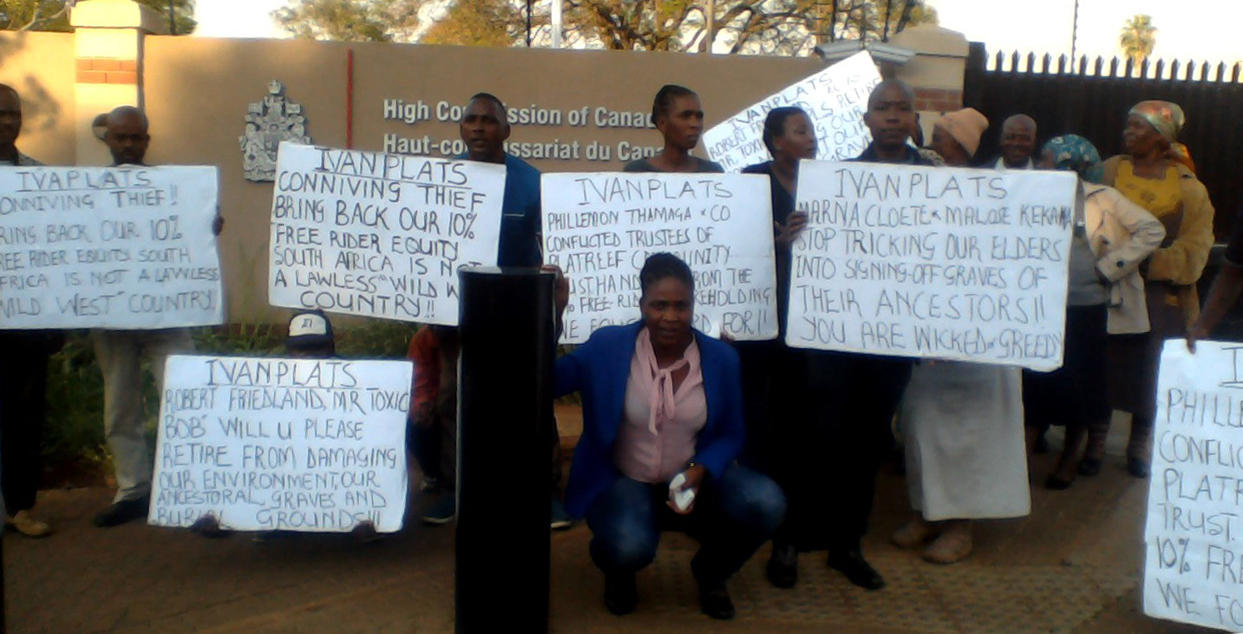