(Guatemala City, Guatemala/Oakland, California/Toronto, Ontario) - The US Security and Exchange Commission (SEC) is being asked to investigate a Canadian mining company with offices in Reno, Nevada and operations in Guatemala. The Justice and Corporate Accountability Project (JCAP), based in Canada, will submit a thirty-five-page report on behalf of the US-based Network in Solidarity with Guatemala (NISGUA) and the Guatemala-based Diocesan Committee in Defense of Nature.

The report asks the SEC to determine whether Tahoe Resources Inc. has failed to meet legal requirements for disclosing human rights abuses and failed to disclose lawsuits that impact the Escobal mine. Tahoe claims strong community support for its Guatemala mine, but the JCAP report says that Tahoe’s annual report shows that opposition is so severe that it cannot connect its mine to the main power grid.  The SEC will determine whether Tahoe provided misleading information to investors.

“Human rights violations have been persistently committed against communities surrounding the Escobal mine, a project implemented without community consent,” says Becky Kaump from NISGUA's office in Guatemala. "In calls for international advocacy we have denounced the direct violence, threats and criminalization carried out against community members."

Tahoe denies responsibility for the threats and deaths surrounding its Guatemala mine, but seven farmers who were shot by Tahoe’s private security guards in April 2013 are suing Tahoe in British Columbia. The head of security for Tahoe, Alberto Rotondo, was charged, but escaped while awaiting trial in Guatemala. He was recaptured in January 2016 in his native Peru.

Shin Imai, professor at Osgoode Hall Law School in Toronto, discovered the lawsuits brought by Tahoe to the Constitutional Court of Guatemala. “I was surprised to find that behind the scenes, Tahoe and mining supporters were bringing lawsuits to try to stop communities from holding referenda on mining. Even more surprising was the secret lawsuit against the President of Guatemala and a half a dozen other government agencies asking for protection from protesters who were impeding the project.” The JCAP report says that Tahoe has not disclosed any of these lawsuits, and this failure may contravene US law.

In January 2015, Norway’s $850 billion Government Pension Fund divested from Tahoe after conducting an investigation, concluding that Tahoe has and will likely continue to pose “an unacceptable risk of…contributing to serious human rights violations.”

Copies of a summary of the report and the full report are linked here: Cover Letter and SEC Disclosure.

For additional information or to arrange an interview:

There has been violence associated with Tahoe’s El Escobal mine in Guatemala.

In March 2013, Indigenous Xinca leader, Exaltación Marcos Ucelo was found dead a day after he was kidnapped on his way home from a plebiscite on mining in the town of Volcancito. In April 2014, sixteen-year old Topacio Reynoso, a youth organizer against the mine, was assassinated and her father badly injured in an attack on their car in Mataquescutintla.[i] In April 2015, Telésforo Odilio Pivaral González, a member of the Committee in Defense of Life and Peace in San Rafael Las Flores, which opposes the mine, was assassinated at a bus stop near his home in Volcancito.[ii] Topacio Reynoso’s father, Edwin Alexander Reynoso Bran was shot again in October 2015 as he and two companions were leaving the office of the mayor of Mataquescuintla.[iii] Both the town of Volcancito and the municipality of Mataquescuintla held plebiscites and the vote went against mining in their region. No suspects have been identified in any of these shootings and Tahoe denies any involvement.[iv] Nonetheless, community members blame Tahoe.[v]

The head of security for Tahoe Resources, Alberto Rotondo, was arrested for ordering the shooting of seven farmers during a protest in April 2013. Rotondo was ultimately arrested in Guatemala in connection with the shooting. After being committed to trial in Guatemala he was placed under house arrest in December 18, 2014. In November 2015 he fled to Peru. He was recaptured in January 22, 2016 and five Guatemalan police officers have been arrested in connection with his escape.[vi]

Five municipalities surrounding the Escobal mine have held official municipally sanctioned plebiscites relating to the mine. The majority of voters in all five plebiscites voted against allowing mining operations in their communities. The results have been published in the official registry for government announcements, the Diario de Centro América. Tahoe and its supporters brought at least four court cases to try to stop or invalidate these official votes, but the Constitutional Court of Guatemala has supported the legislation that allows communities to hold plebiscites.[vii] Tahoe has not disclosed any of these court cases, nor the impact of these plebiscites on the company’s expansion plans.   On March 9, 2011, in the Annual Information Form Tahoe describes protests as “small” with “very limited” participation by local community members, stating that they “have not had a material effect on operations, financial position, cash flow or results.”[viii] The Preliminary Economic Assessment of May 7, 2012, further states, “community support is very high.”[ix]   At the time of the publication of the 2011 Annual Information Form and 2012 Preliminary Economic Assessment, Tahoe was actually experiencing significant community opposition. In June 2012, only a month after the release of the Preliminary Economic Assessment, Tahoe’s wholly-owned subsidiary, MSR, secretly filed a lawsuit before the Constitutional Court of Guatemala complaining that community protests had “impeded its work”, including the construction of an electrical transmission line through a road allowance in the neighbouring municipality of Mataquescuintla. The lawsuit named the President of the Republic of Guatemala, Ministry of the Interior, Ministry of National Defence, Director of the National Police, Commissioner of the National Police in Department of Jalapa, and the Commissioner of National Police in the Department of Santa Rosa. It accused them of failing in their duties to protect the mine.[x]   The Norwegian Government Pension Fund Divests from Tahoe   The Council on Ethics provides advice to the Norwegian Pension Fund on whether certain investments meet ethical criteria set out in its governing documents.[xi] In 2014, the Council undertook a review of the human rights issues related to Tahoe. The Council gathered information from several sources, including reports by the United Nations High Commissioner on Human Rights and Amnesty International, as well as from Tahoe itself. The Council provided Tahoe a draft of its report for comment. Ultimately, the Council concluded that, “the company’s replies to the Council make it difficult for the Council to conclude that the company’s systems and strategies are suited to reveal, prevent and compensate for human rights violations connected to the operation.”[xii]   The three issues to be investigated by the US Securities and Exchange Commission   The JCAP submission to the SEC focuses on three complaints against Tahoe Resources Inc. First, JCAP requests a review of whether Tahoe meets the requirements of a “foreign private issuer”. In its 2015 Short Form Prospectus, Tahoe disclosed that its status as a foreign private issuer may be on weak ground. It may be that Tahoe should no longer enjoy the status of a foreign private issuer and should be held to account to the more rigorous standards provided for in the United States legislation.

Second, JCAP requests a review of Tahoe’s disclosure, or lack thereof, with regard to community opposition to the Escobal mine; its lawsuits against the President of Guatemala and other government entities to provide Tahoe with more protection from protesters and litigation to stop or invalidate community plebiscites on whether to accept or reject mining; and key information relating to human rights violations.

Third, if the SEC finds that Tahoe failed to meet disclosure requirements, JCAP requests that the SEC review whether such a failure would give rise to personal liability, pursuant to Exchange Act Rule 10b-5.

The submission provides substantive information on the disclosure request, while deferring to the authority of the SEC to investigate whether Tahoe meets the requirements of a “foreign private issuer” or whether Tahoe’s actions give rise to personal liability.

[iv] Ira Gostin, Vice President for Investor Relations at Tahoe said in an email  “Not going to discuss these unfortunate Guatemala events that had absolutely nothing to do with mine operations. To say that the Escobal security team had anything to do with these deaths is unfounded and reckless.” The Plaid Zebra, “Unethical Canadian mining practices shed a harsh light on Canada’s good-guy image” (February 26, 2016), online: <http://perma.cc/N4NG-8PBQ>. 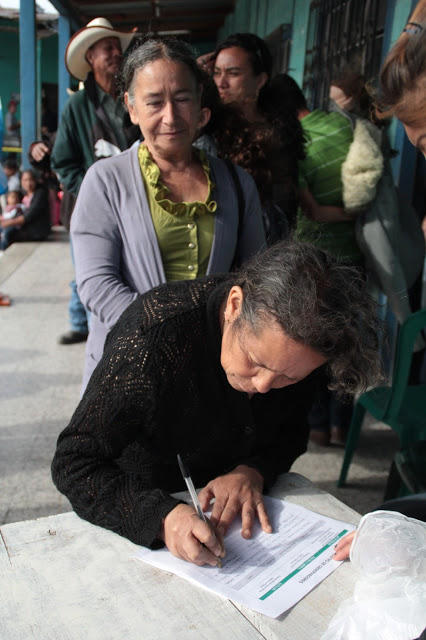