(San Salvador/Ottawa) In a startling development driven by a groundswell of opposition to the social and environmental risks that mining poses to this Central American nation, El Salvador’s Legislative Assembly voted Wednesday to become the first country to ban mining for gold and other metals, in effect canceling any projects now in the pipeline.

The vote, in which 69 of the country’s 84 legislators cast ballots to prohibit the mining of metals, makes tiny El Salvador the unlikely hero in a global movement to put the brakes on a modern day 'gold rush'; for much of the past few decades, companies have been scouring the earth for every last deposit of gold and other metals. A run of mining projects in El Salvador and other Latin American countries, and a legacy of contamination from old ones, has made the region and its highlands, farms, forests and waterways a focal point in the fight.

“Mission accomplished!” tweeted Deputy Dr. Guillermo Mata, a lawmaker from the Farabundi National Liberation Front (FMLN) and head of the Commission on the Environment and Climate Change. Mata, a pediatrician by training, has been leading the charge in the legislature for the mining ban. "Hailing the legislation, which is signed into law will make El Salvador the first country in the world to ban mining," Mata said. “We have heard the clamour of the people.”

Dozens of lawmakers and advocates inside and outside the chamber cheered enthusiastically after the vote in the chamber, where desks were decked in yellow signs emblazoned “No to Mining, Yes to Life.”

The vote is the culmination of more than a decade of intense protest over projects that foreign mining companies have sought to exploit in El Salvador’s highly vulnerable environment. Salvadoran President Salvador Sánchez Cerén is expected to endorse the legislation.

The country has the second-worst deforestation in the hemisphere, after Haiti, and 96 percent of its surface water is contaminated. Salvadorans fear that the Rio Lempa, the country’s lifeline, would be deeply impacted from mining were it allowed to proceed.

Over the past decade, communities in El Salvador have learned from the experiences of affected groups in Honduras and Guatemala about the long-term social and environmental impacts from mining, as well as from the legacy of mining contamination in their own country.

A similar exchange took place this week, but the lessons came from half-way around the world.

On the eve of the legislative vote, a government official from the Philippines traveled to El Salvador to warn political leaders of the adverse social and environmental impacts of mining in his country, in particular the gold and copper mine of Canadian-Australian company OceanaGold, which has sought unsuccessfully to mine in northern El Salvador.

On the topic of water—a crucial matter in this parched Central American nation—Provincial Governor Carlos Padilla said that OceanaGold’s open-pit mine in his home province of Nueva Vizcaya has put a critical watershed at risk, and exhausted wells and rice irrigation reservoirs, harming in particular communities closest to the mine.

"I congratulate the people of El Salvador, including the government, for this victory in passing this bill to ban metallic mining in this country,” said Governor Padilla, following Wednesday’s vote. “I admire the efforts of all of those in and out of government - and especially in Congress - who made this historic victory possible."

“While I rejoice for this victory,” the governor added, “I grieve that we in the Philippines have still to wait for the day when we are able to reach this same achievement.”

"El Salvador has had to stand up to considerable pressure from transnational mining companies,” according to Jen Moore with MiningWatch Canada. In one case, the government has been involved in a costly, seven-year arbitration suit, which was originally brought against it in 2009 by Canadian firm Pacific Rim Mining, then carried on by OceanaGold, when it acquired Pacific Rim in 2013.

The company claimed that the government of El Salvador must issue it a mining permit for the El Dorado project in northern El Salvador. The community and the national government disagreed.

The US$250 million suit, which cost the government of El Salvador an estimated US$13 million, was finally decided in October 2016, when the International Centre for the Settlement of Investment Disputes (ICSID) of the World Bank Group ruled against the company, finding that it had not met mining law requirements and owes El Salvador US$8 million. The company has still not paid, but the tribunal ruled this week that the company must begin paying interest on what it owes.

“It is clear that the Salvadorans have opted for water over gold,” Moore said. “And now, OceanaGold must pay the $8 million to El Salvador and should immediately put a halt to all efforts to mine in the country out of respect for this decision."

MiningWatch Canada and many other organizations worldwide who have supported El Salvador in its long struggle said the decision offers inspiration to the many communities, organizations and governments seeking to resist the long-term harms from mining on lands of Indigenous peoples and other affected communities worldwide.

“It is amazing what this small country has achieved against tremendous odds,” said Manuel Pérez Rocha for the Institute for Policy Studies in Washington D.C., part of the International Allies coalition with the National Roundtable against Metal Mining in El Salvador.

“It is an inspiration for countries throughout the region," he added. "So many people made this happen; they include local communities, environmental and social justice organizations, the Catholic Church, the human rights ombudsman’s office and government entities, among others. It has been a truly remarkable effort.”

MiningWatch Canada is a member of the International Allies coalition that acts in solidarity with the National Roundtable against Metallic Mining in El Salvador. 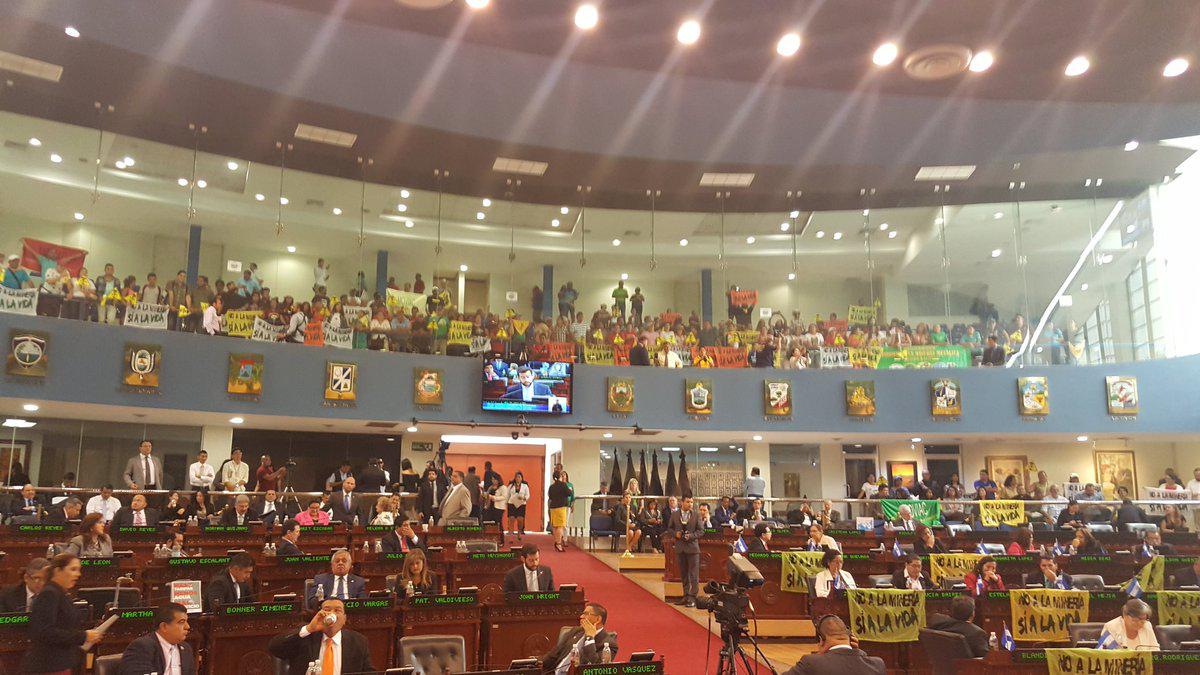