(Puno, Cochabamba, Washington, Ottawa) In recent weeks, international organizations from five continents have endorsed a public sign-on letter entitled Stop the Criminalization of Social Protest and Corporate Impunity in Peru!! (scroll down for English). The initiative was promoted by local organization Human Rights and Environment - DHUMA of Puno (a member of the Peruvian National Coordinator of Human Rights CNDDHH and of the Muqui Network), in alliance with international organizations such as the Institute for Policy Studies (IPS) of Washington D.C., The Democracy Center in Bolivia and MiningWatch Canada.

The letter, supported in total by 131 Peruvian and international civil society organizations, urges the Supreme Court to annul the sentence against Walter Aduviri. Aduviri was sentenced to 7 years in prison and ordered to pay more than USD$600,000 in damages, for alleged crimes committed during the socio-environmental conflict known as the "Aymarazo" in 2011.

On September 17th, 2018, the Peruvian Supreme Court will hear Aduviri’s appeal in Lima. According to the sign-on Letter, if the Supreme Court does not annul the sentence, it will be setting harsh precedents for the defence of territory and human rights in Peru. It states: “We are disturbed to note a growing tendency towards deepening criminalisation. The abusive imposition of penal processes against social organisation leaders and communities via a distorted use of criminal offences (such as aggravated extortion and Indirect Perpetration) is particularly worrying. Such wilful misinterpretation of the law seeks to equate social organisations with criminal groups and their spokespeople with instigators of crime. As such it represents a grave attack on human rights; on freedom of expression; and on social mobilisation.”

The case dates back to 2011, when communities in the Puno region mobilized against the Santa Ana mining project, owned by the Canadian company Bear Creek. The mobilization demanded the cancellation of the project due to the risk of contamination of their water sources (including Lake Titicaca, shared by Peru and Bolivia); the lack of consultation of local communities; questions around the legality of the project; a lack of transparency; and the company’s negotiating in bad faith with the communities. After protests were repressed, the government finally canceled the project. However, the Prosecutor's Office of Puno initiated criminal proceedings against the main spokespersons, which led to the conviction of Walter Aduviri in December 2017.

The sign-on Letter was delivered to the Peruvian Supreme Court on 5th September last. The official delivery of the document by human rights defender Yolanda Flores, representing the organization Human Rights and Environment - DHUMA, Puno, was broadcast live. Flores was accompanied by other defenders from Cajamarca, Selva Central, Cusco and Puno, as well as representatives of the National Coordinator of Human Rights - CNDDHH, who held a sit in in front of the Palace of Justice.

On Tuesday 11th September, in the city of Puno, a press conference was held in which the father of Walter Aduviri, Pablo Aduviri, with tears in his eyes, addressed the media demanding that the Supreme Court of Justice and the Government of Peru free his son from the unjust sentence. "My son cannot go to jail, my son is not a thief, he is not corrupt, he is not a murderer," he said, lamenting the great hardships that this process has brought on his entire family.

Also present was Patricio Illacutipa Illacutipa, one of the other people prosecuted following the Aymarazo, who said that they are continuously labelled as "radicals, anti-mining, anti-system, anti-development" and that this is outrageous. "I personally have been psychologically destroyed for 8 years. Right now I'm fighting to get my family back," he said, referring to the consequences of being criminalized in this way.

Illacutipa is now President of the Natural Resources Defence Front of Southern Puno. In his contribution he also rejected the payment of a multi-million dollar compensation that Bear Creek demands from Peru for the cancellation of its project in 2011. This was the result of a case that the company filed against the country at ICSID, the investment arbitration arm of the World Bank, in 2014. In December 2017, the same month in which the courts of "justice" condemned Aduviri, ICSID ruled in favor of Bear Creek and ordered Peru to pay more than USD$30 million in compensation, including legal fees and interest.

Recent popular mobilizations have had an impact: Congress has stalled a bill proposing payment of US$31 million to the Canadian Bear Creek Mining Corporation as compensation for the 2011 “Aymarazo”. Last Thursday September 8th, the Budget Commission voted against article 13 of the 03121-2017 bill. According to an interview he gave with Telesur. Oracio Pacori Mamami, a lawmaker from Puno and head of the Commission, warned Congress about the social upheaval that passing such a bill would trigger. "We have warned the Economy Minister about this danger and that's why this payment has been suspended", Pacori Mamami said.

This compensation is considered absurd and unjust by Peruvians involved in the struggle, and this sentiment was echoed at Tuesday’s press conference in Puno. "The Peruvian people have no reason to pay. Apart from the fact that they [the company] has violated collective rights and the constitution, now the company wants to be paid? We will never allow that. The people will have to rise up once more and a second Aymarazo will occur", said Illacutipa. On the contrary, he affirmed that it is Bear Creek who should compensate the people and the communities for provoking this conflict and causing losses in their economic activities during the days of mobilization.

Rodrigo Lauracio, who was present at the conference on behalf of DHUMA, also expressed his rejection of the ICSID ruling. "Bear Creek mining company demands compensation, but the people who have been criminalised and who have been prosecuted ... there is no compensation for them. Seven years of attending hearings, of emotional and reputational damages....who has compensated them?", he said.

Other representatives who were also present from RED MUQUI SUR, The Democracy Center and the Institute for the Study of Andean Cultures - IDECA Peru, stressed that the case of Walter Aduviri is not an isolated case. It is, they noted, another link in the chain of the extractivist/developmentalist model imposed by the State that seeks to dispossess indigenous communities of their resources and their territory in favor of the interests of multinational companies. The criminal proceedings, the stigmatization and de-legitimization of the struggles of the communities and their spokespeople, are used precisely to undermine social mobilization in protection of their territory in the face of the extractive whirlwind. Rodrigo Lauracio of DHUMA says, "We believe that the processes of criminalization are not limited just to legal cases, but also include smear campaigns and in some cases of defamation against spokespersons or representatives of indigenous communities. All this is part of a process of a broader trend of criminalization and stigmatization that communities face when they reject extractive projects that have not been consulted with indigenous peoples.”

The sign-on Letter was also sent to the Canadian mining corporation Bear Creek. One of its demands is aimed directly at the corporation: "We demand that Bear Creek Mining Corporation and the mining companies located mainly in southern Peru respect the rights and decisions of the communities in relation to the Santa Ana project and any other mining project throughout the country.”

For his part, Patricio Illacutipa, in his final contribution at the press conference, called on the population in general, and in particular to local communities, to prevent the entry of mining companies into their territories. "These extractive companies, plunderers of our natural resources, will never enter. We have to defend our land and territory, our natural resources, our water sources, because water is life [and] mining is death," he said.

On October 4th, 2018, Puno-based organization Human Rights and Environment-DHUMA will receive the Institute for Policy Studies’ Letelier-Moffitt international Human Rights Award in Washington D.C..  Members of the organization will be present to accept the award which is presented annually in memorium of fallen human rights defenders Orlando Letelier and Ronni Karpen Moffitt. More information about this event can be found here: https://ips-dc.org/about/letelier-moffitt-human-rights-awards/ 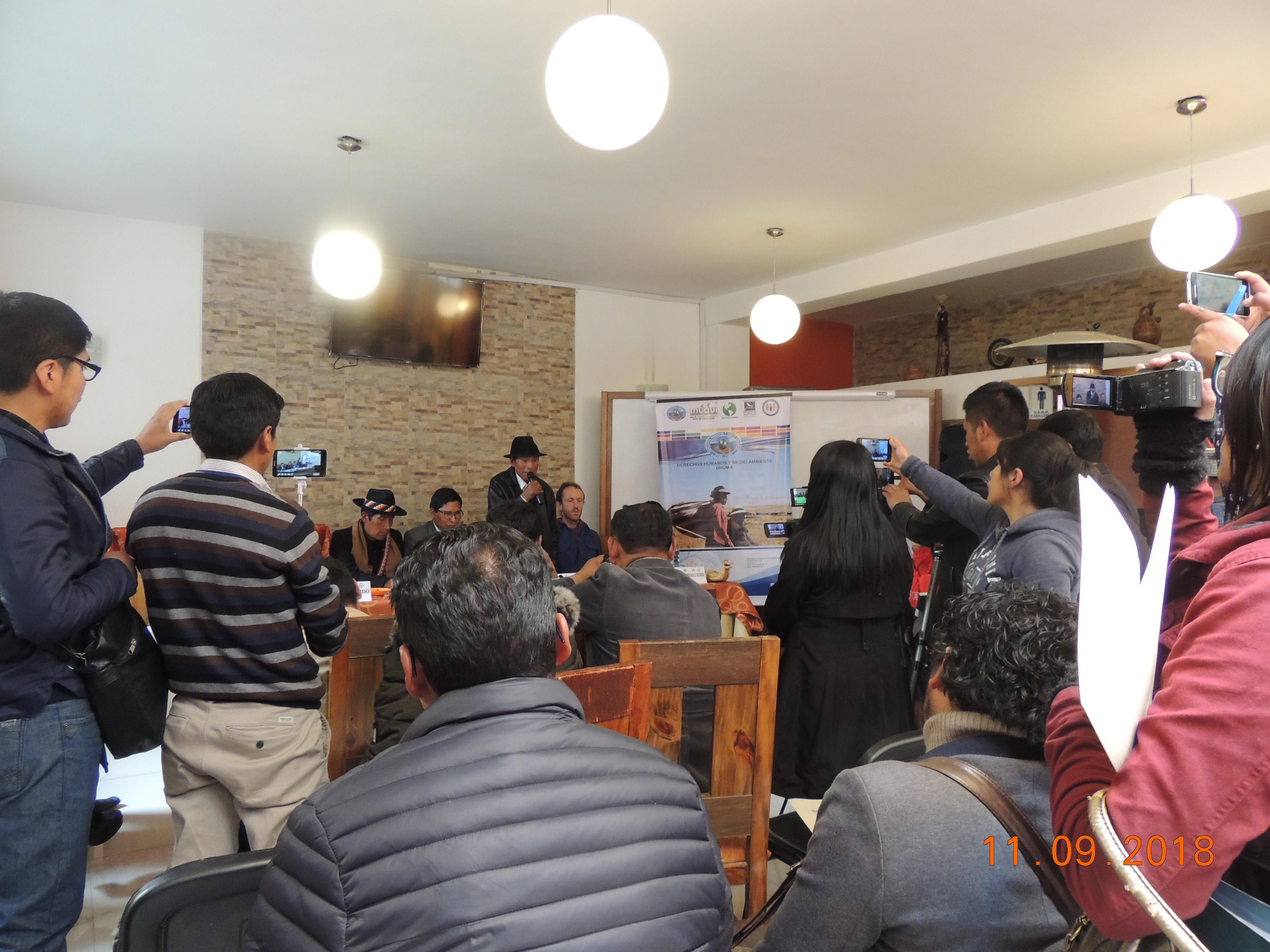 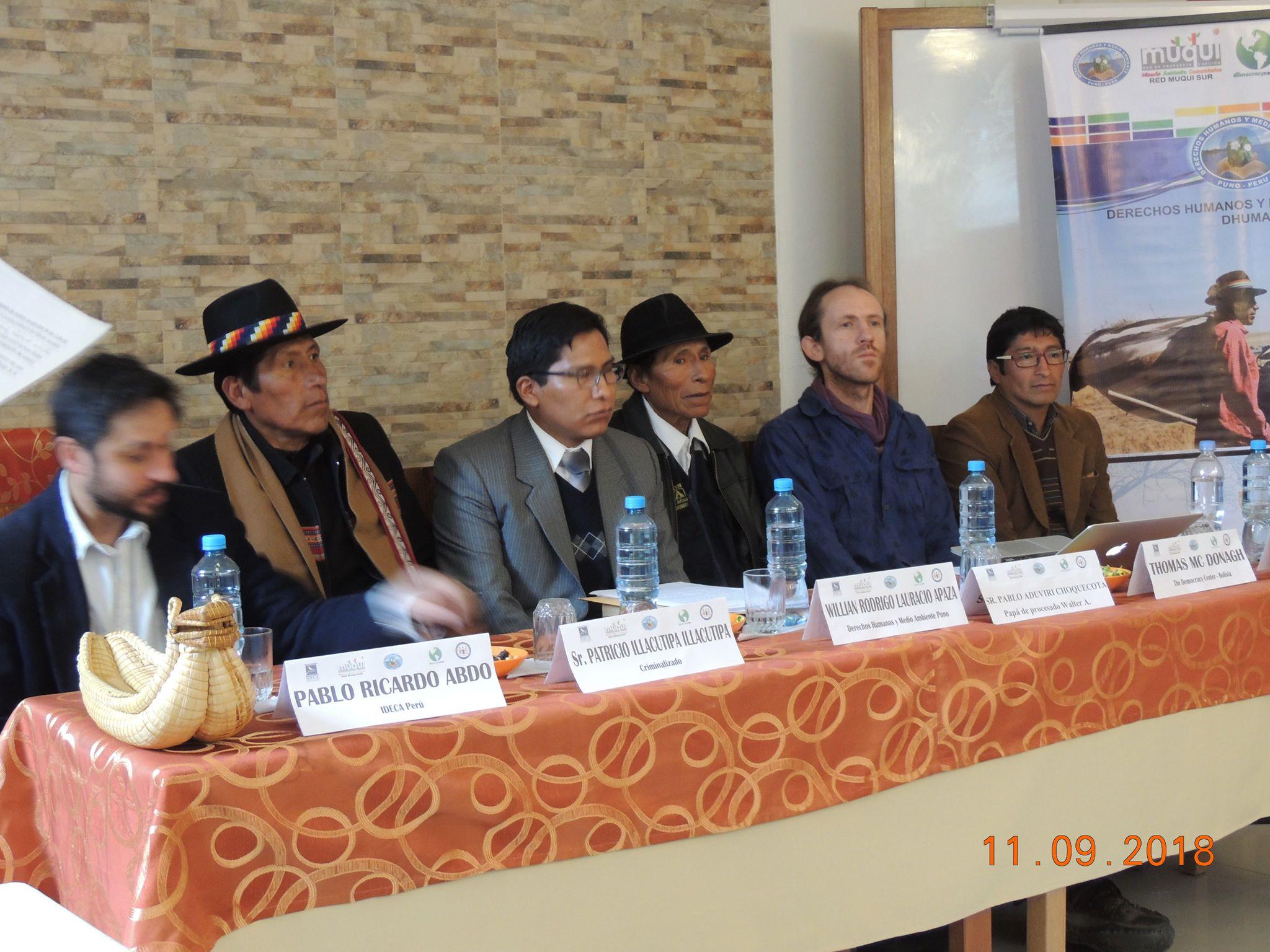 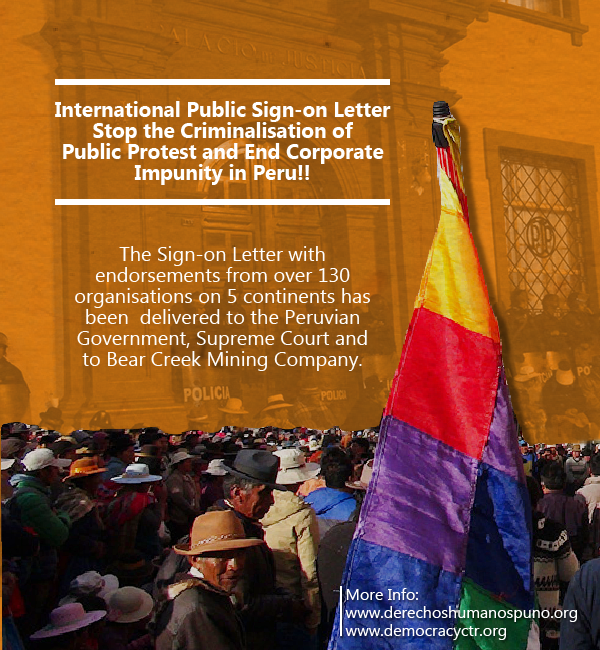