(South Rupununi, Guyana, Sept. 21, 2018) Marutu Taawa (Marudi Mountain) sits deep in Wapichan territory in the South Rupununi, Guyana, and holds historical, cultural, spiritual, and biological significance for us. The stories that we Wapichan know of Marutu Taawa, however, are not ones we usually hear in the news. Instead, we hear news about the amount of gold being discovered at Marudi by the Canadian mining company Guyana Goldstrike, which operates through its local subsidiary, Romanex Guyana.

In July, Goldstrike and Romanex published a draft Environmental and Social Impact Assessment, seeking an environmental authorization from the Guyana Environmental Protection Agency (EPA) to begin large-scale operations on the mountain. The South Rupununi District Council (SRDC), a legal representative institution for the Wapichan people, recently submitted official comments and objections to this ESIA, requesting that such an environmental permit be denied because of grave defects in the ESIA process and report.

Marutu Taawa is sacred to us, and is a place where we hunt, fish, and gather, and where our rivers are born. The mountain sits at a critical watershed, and its creeks flow into important rivers – the Kwitaro, Kuyuwini, Rupununi, and Essequibo, important lifelines for our communities. As one of our elders and knowledge holders, Nicholas Ernest Myers, says, “All those mountains and forests down towards Marutu Taawa ‘Darkness Mountain’ are important to us Wapichan nao, and our foreparents cared for the area… It is also a very rich area for important resources used by the Wapichan nao… The area is so important as all of the creeks coming from the Marudi area are feeding different streams and rivers. It is a special watershed in our territory…” With this proposed large-scale mine, we foresee major negative impacts on our culture and way of life and the environment. This is of grave concern to us, and should be to all Guyanese, and most of our concerns are not adequately addressed in the ESIA.

ESIAs are supposed to provide the government and affected communities with information about the potential impacts of a project before the project is approved. International courts have mandated, and international standards and guides recommend, that indigenous peoples effectively participate throughout the ESIA process. Such involvement would ensure that the affected indigenous people can fully understand the impact analysis presented in the resulting ESIA report, and that their concerns will be addressed. In Guyana, the Environmental Protection Act requires that any interested bodies or organizations be consulted. Because we are the main rights holder in this process and we were never consulted, we submitted formal objections to the draft ESIA in accordance with the Environmental Protection Act.

SRDC Chair, Nicholas Fredericks, emphasizes that a proper process is key: “We are very disappointed by the lack of respect for our rights throughout this process. Without proper consultation and without our participation, this is just another example of the failure to respect indigenous peoples’ right to free, prior, and informed consent and our right to our traditional lands. Following a proper process was critical here because Marudi is an extremely important watershed and ecosystem and we must protect it. In the future, we want to see governments and companies respecting our rights and engaging with us in an effective way.”

Given the flawed ESIA process and the defects in this draft ESIA itself, the SRDC strongly encourages the EPA to deny Romanex an environmental permit at this point. We expect that in a revised ESIA process, Ground Structures and Romanex will respect our rights, utilize up-to-date information, apply international best practices and will fully and effectively involve us. We ask that Guyana Goldstrike [TSXV-GYA] take responsibility for overseeing the actions of its subsidiary and ensure that it respects indigenous rights; we also request that the EPA oversee a process that ensures the consultant and the mining company are adhering to the law and international best practices relating to our rights.

The conversation about Marudi has been solely focused on the gold for too long. We will not continue to be left out of the conversation. We know, use, and respect Marutu Taawa, and we cannot allow decisions to be made about what happens there without us. 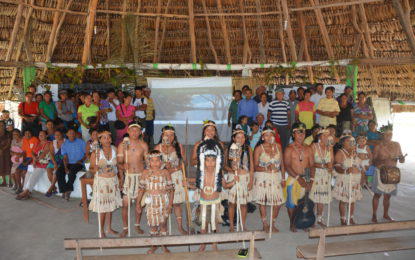