(Toronto) A noisy crowd came together today at the most important event of the mining sector, the Prospectors & Developers Association of Canada (PDAC). The rally called out the Chilean government’s participation in the event – seeking to further increase mining investment despite the devastating waves of protest and violent repression that have rocked the country for months, and a deepening ecological crisis in the country, in which the mining industry plays an important role.

Since October, Chileans have been protesting the extreme inequality between the elite and the rest of the country, the dictatorship-era constitution, the failure of public services and the privatization of water of resources, all as structurally connected to the country’s extractive economy. The Chilean government has unleashed brutal repression against protesters with complete impunity.

Canada is complicit in the violence unfolding in Chile through its political and economic support of the Piñera government, exporting more than $7 million in military hardware to Chile in the last few years. The Canadian government has been silent despite the undeniable evidence of systematic repression against Chileans and Indigenous (Mapuche) people.

To date, two Quebec Human Rights Observatory missions have traveled to Chile, and both have reported on the systematic violations of human rights in the country. UN investigators also said Chilean police and military forces have committed serious human rights violations including killings, torture and sexual violence during anti-Government protests.

“The violence and repression by state security forces observed since the start of the social uprising in October have been no different from that historically imposed on Mapuche communities and in other contexts of mass protests. But now the repression has spread to the entire population and it is therefore possible to speak of the generalized nature of human rights violations”, deplores Christina Ayala, of the Committee for Human Rights in Latin America (CDHAL), who participated in the International Civil Society Observation Mission in Chile.

It is no coincidence that the most brutal repression is occurring in the northern part of the country, overlapping with the majority of Canadian mining interests. Currently there are over 40 Canadian mining companies with over 100 mining projects and mines, actively contributing to the ecological crisis.

“Chile is the second most important destination for Canadian FDI in mining, and Canadian companies have been criticized for consuming irrational amounts of water, encroaching on communal pastoral lands, contaminating the air, driving deep divides in communities, and for enabling armed private security forces to use live ammunition. Our companies are contributing to deepening the ecological and political crisis in Chile by continuing to promote mining investment,” said Kirsten Francescone of MiningWatch Canada.

The Chilean Minister was present at PDAC to present on the country’s future mining plan, and to promote lithium extraction, an area where Canadian mining companies are aggressively exploring and speculating.

“Today, the Atacama Salt Flats are severely deteriorating as the result of decades of extensive copper and lithium mining. We are concerned that these new lithium projects are being promoted and approved without the proper environmental protections, as is the case for Canadian company, Wealth Minerals, or while in violation of Indigenous rights, as is the case of another Canadian company, Lithium Chile,” said Ramon Morales, of the Plurinational Observatory of Andean Salt Flats, who visited Toronto this week and attended the rally.

Protestors Gather Outside PDAC 2020 in Toronto.jpg 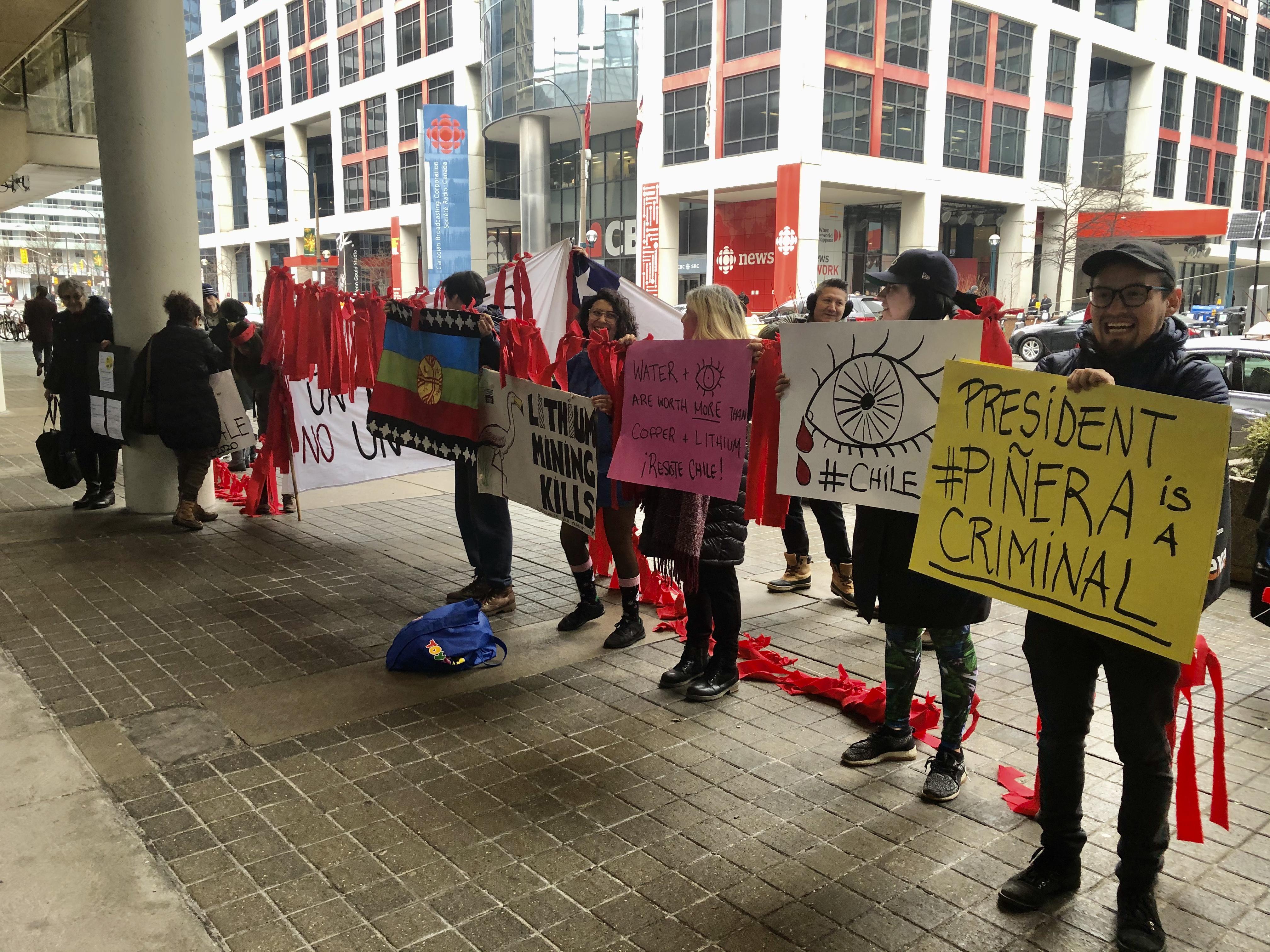 Protestors Gather Outside PDAC 2020 in Toronto.jpg 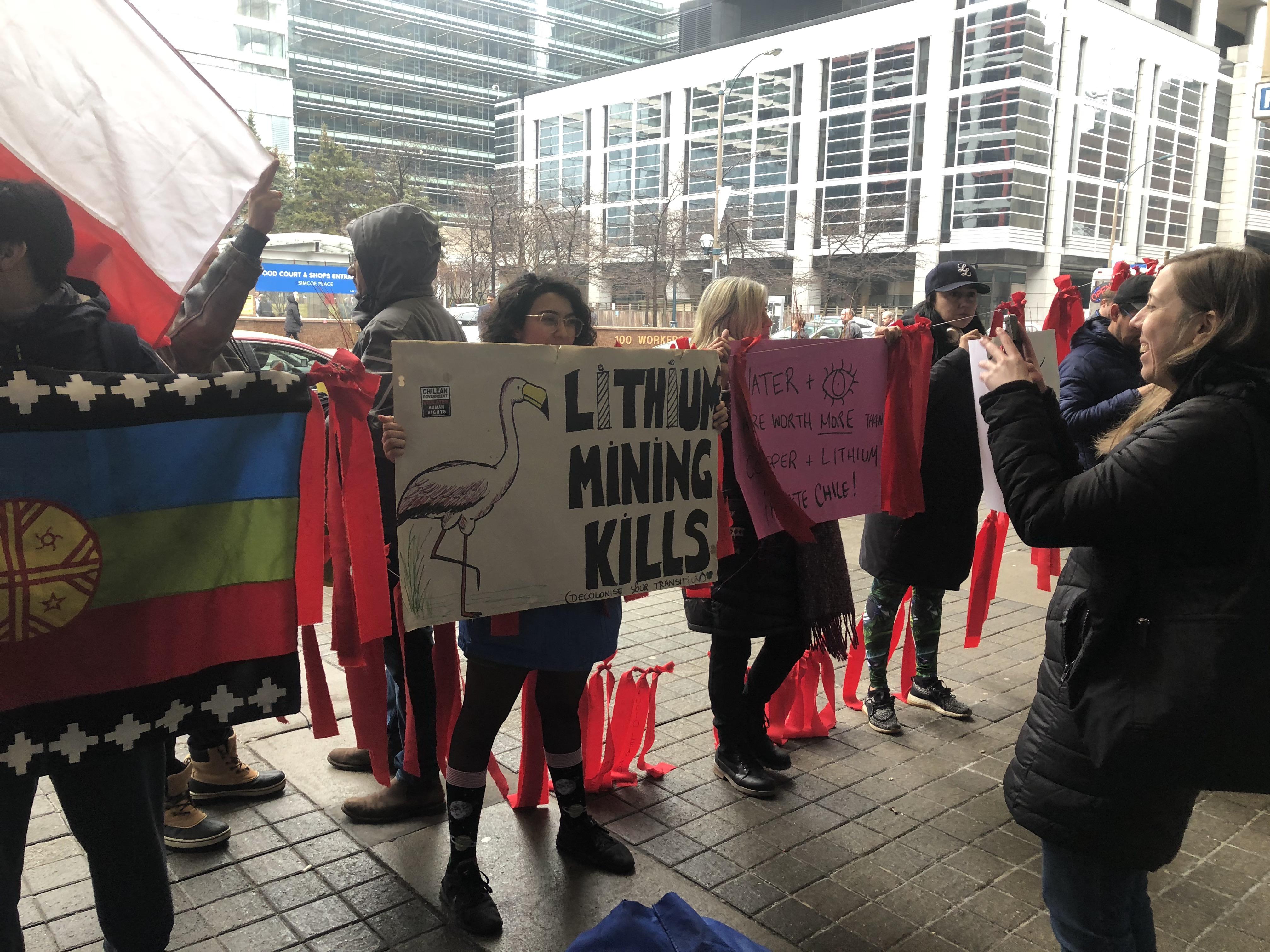 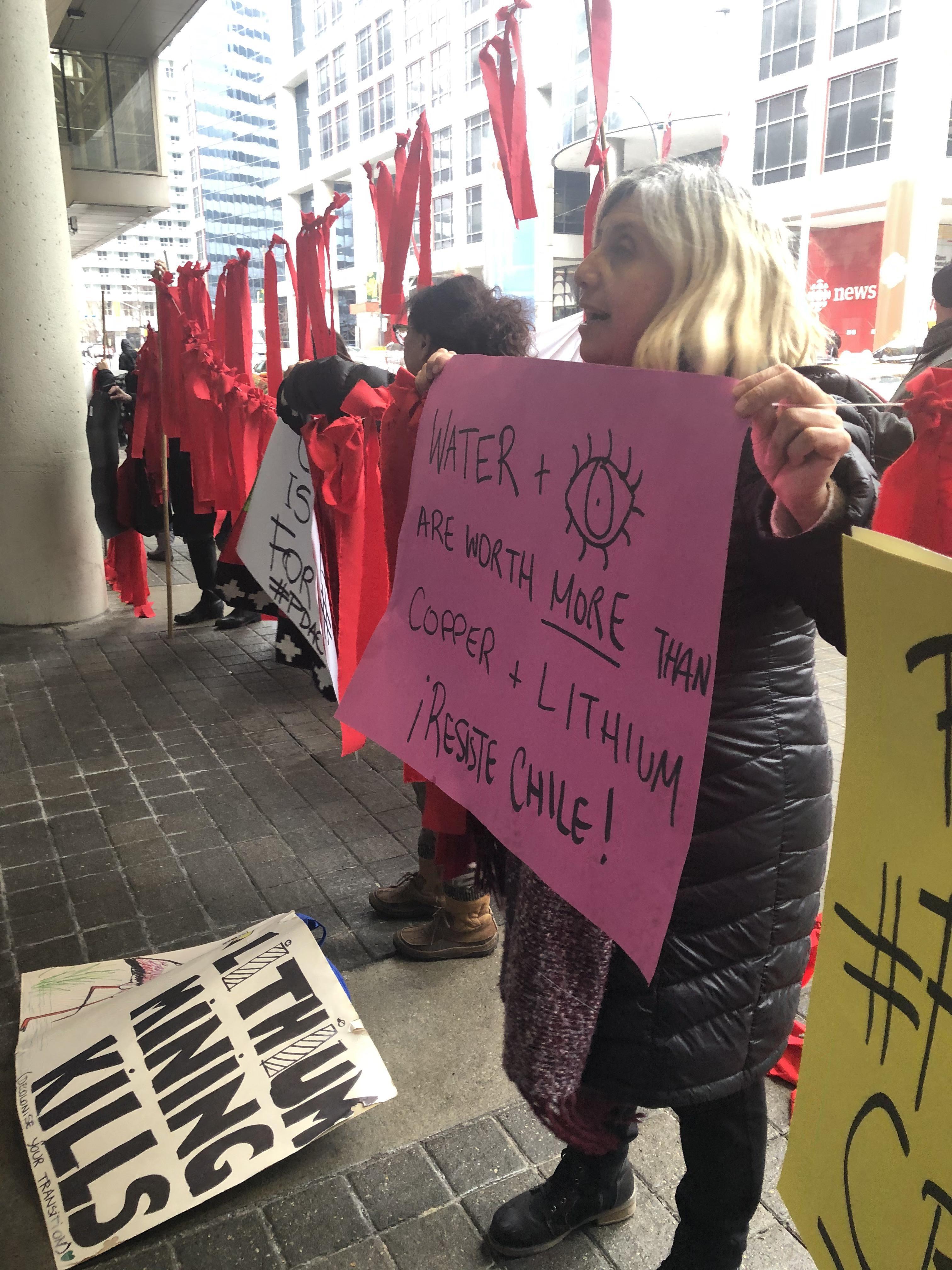