Faced with the Upcoming Ruling Concerning the Shutdown of Canadian Barrick Gold’s Pascua Lama Mining Project: 14 Reasons Why the Environmental Court and the Chilean State Cannot Allow its Continuation

The Pascua Lama Mining Project is owned by Canadian Barrick Gold and is located in the high mountain area of the Huasco Valley, Atacama Region, Chile. This project is currently suspended due to serious environmental noncompliance, but there’s an upcoming ruling that could order its reopening. Below are 14 reasons why the communities oppose this project and based on which the Chilean State cannot allow its continuation.

1. Malicious Destruction of Glaciers. Barrick attempted to destroy glaciers without informing about it and was forced to acknowledge their existence due to community pressure. It is nonetheless responsible for the destruction of at least three glaciers: Toro 1, Toro 2, and Esperanza. In 2013, the first two were at 1% of their original size and there is mounting evidence that they are covered in dust. The company has been sentenced in several occasions for the severe non-compliance of its glacier monitoring plan, one of the requirements set forth in its environmental licence, a violation that was ratified by the Environmental Superintendence.

2. Restricting the Access to the Mountain Range. The gates and signs reading No Trespassing; Private Property, set up by Barrick, prevent the communities from freely accessing the mountains. For the Valley’s ancient dwellers, the mountain range was an ally for survival and a source of firewood and medicinal herbs. The glaciers that source water are honored and considered “perpetual banks”. This restriction is also threatening the ancient tradition of animal husbandry and transhumance, since now shepherds must ask the mining company for approval or accept alternative routes along the coast to move their herds, some of which have resulted in the death of several animals.

3. River Pollution. The Valley’s pre-cordillera area is the source of several rivers, some of which have been polluted by Barrick since the beginning of its operations, but more intensively as of 2011, when it began the mine’s pit without having built a water treatment system. Since then, on several occasions the rivers have ran with acid drainage and irregular discharge of polluted waters, in addition to exceeding by large almost every heavy metal threshold. These rivers feed all of the Valley’s ecosystems and supply all its irrigation channels for crops, in addition to being the source of drinking water for the population and animals.

4. Harm to Human Health. Pollution with heavy metals meant a severe threaten to human health, particularly for children 0-4, a fact that has been ratified by the Environmental Superintendence. The presence of this company in the high mountains is a permanent risk for human health due to its incapacity of managing the forces of nature.

5. Destruction of Native Flora and Andean Wetlands. Barrick has already been penalized for the irreparable destruction of several acres of llareta moss and high Andean wetlands. These are slow-growing fragile ecosystems that provide many ecological services, both for this territory and for the entire planet.

6. Binational Mining Treaty: Promoted by Barrick, signed by president Frei in 1997 and ratified by president Lagos in 2001, this treaty allows for the exploitation of the high summits at the borderline, creating in practice a virtual country with regulations custom-made for the mining companies. With this treaty, Barrick managed to get a hold of 25% of the national territory, which corresponds to approximately 4,000 km of borderline. Today, there are more than 30 mining projects in the pipeline in the area, which threaten to destroy more glaciers and pollute additional water sources.

7. Tearing the Social Fabric. Barrick has proven to be a bad neighbor who has sowed discord and mistrust among the Valley’s community members, acting in bad faith, deceiving, and lying. With unprecedented financial resources that took advantage of small and vulnerable farming communities, it funded projects through public agencies and made direct money contributions to the neighbors, thereby undermining their dignity. Thus, it bought wills and managed to disrupt communities who had organized against the mining operation, using the tactic of divide and rule. In 2014, it signed an agreement with a handful of leaders and behind the back of the community known as the “Diaguita – Barrick Understanding Memorandum Agreement”. This agreement was announced to the media with great fanfare in order to demonstrate the feasibility of the project and the “acceptance” by the Diaguitas (Chile north’s indigenous peoples). However, the organized community along with the Diaguitas that were unwilling to compromise, managed to uncover the maneuver before the pubic. The division caused by this bad neighbor continues until today.

8. Coopting the Huasco River Surveillance Board. In 2005, Barrick signed an agreement worth US$60 millionwith only eight of the nine board members and behind the backs of the Board’s members. With this, it managed to silence this important organization of more than 2000 irrigation farmers who once eagerly opposed the project. Subsequently, it began a secretive purchase of water shares to gain control of the Board’s decision-making power (the votes of which are based on water shares).

9. Track Record of Penalties. To date, Barrick accumulates nine penalties between 2007 and 2018. In addition, it is the largest offender in the country’s history and was penalized with the highest fine on record in Chile. Even so, it keeps on non-complying. How many penalties must a company accumulate before it is clear that its operations violate our laws? We don’t want to let Barrick break their own records. The evidence shows by large that they have no intention of complying and therefore, the only solution is for them to close their operations and leave our Valley and country forever.

10. Corruption and Illegal Actions. Barrick is a member of the Council of the Americas, a US-based corporate organization that promotes free trade and which, among other actions, has acknowledged two Chilean former presidents (Lagos and Bachelet) for their loyalty to the privatizing system designed and implemented during Pinochet’s Dictatorship. Barrick’s contacts pervade all of Chile’s national life and venues, including the governments in office and the mainstream media. That is how it has managed to keep on operating in spite of lies, wrongdoings, concealment, illegalities, infractions, and penalties. Not long ago, Barrick’s Executive Director recognized in an interview to have a direct line to the current Government and a joint working agreement, disregarding every evaluation and law enforcement process applicable to the rule of law.

11. Claims by Chile’s Environmental Agency (SMA). Upon demanding the project’s shutdown, the SMA argued the need to protect the environment and the community based on a potentially severe and impending harm due to grave and persistent non-compliances of the standards, measures, and conditions set forth in the project’s environmental licence. In addition, it warned that risks could materialize should the project resume its operations.

12. Acknowledgement by Barrick Itself. If Barrick’s top-level executives have already ratified (in a leaked audio, in a public interview, and in the findings of a feasibility study corresponding to Q4 2019) that they built this project noncomplying the environmental commitments made in their Environmental Qualification Resolution (RCA) and that the project is unfeasible. What further evidence is needed? When a company openly recognizes that it cannot comply with an environmental resolution (even if insufficient and obtained wrongfully), it is unbearable to let them continue damaging our resources, particularly one of the scarcest natural assets today: water.

13. Ordering the death of a Valley. The Huasco Valley has been historically productive, fertile, and diverse. Large-mining operations have proven to be totally inconsistent with traditional livelihoods, including small-scale farming, and animal husbandry, and prevent the possibility of developing and continuing these activities, thereby becoming more a loss than a gain for the Valley.

14. Rethinking Development in the Covid-19 Crisis. This world crisis calls upon us to rethink both development and the continuation of our species. In this context, it is clear how self-sustainable isolated places are playing a crucial role in protecting ourselves against future health threats, which could unfortunately increase in severity and frequency. Therefore, it is worthwhile to safeguard territories with their own development options and not sentencing them to death by imposing upon them activities that destroy their ecosystems.

GIVEN ALL THESE REASONS, AND TO PROTECT LIFE, WATER, AND THE INTEGRITY OF OUR VALLEY, WE DEMAND THE TOTAL AND FINAL SHUTDOWN OF THE PASCUA LAMA PROJECT AND BANNING THIS DESTRUCTIVE COMPANY FROM OUR COUNTRY 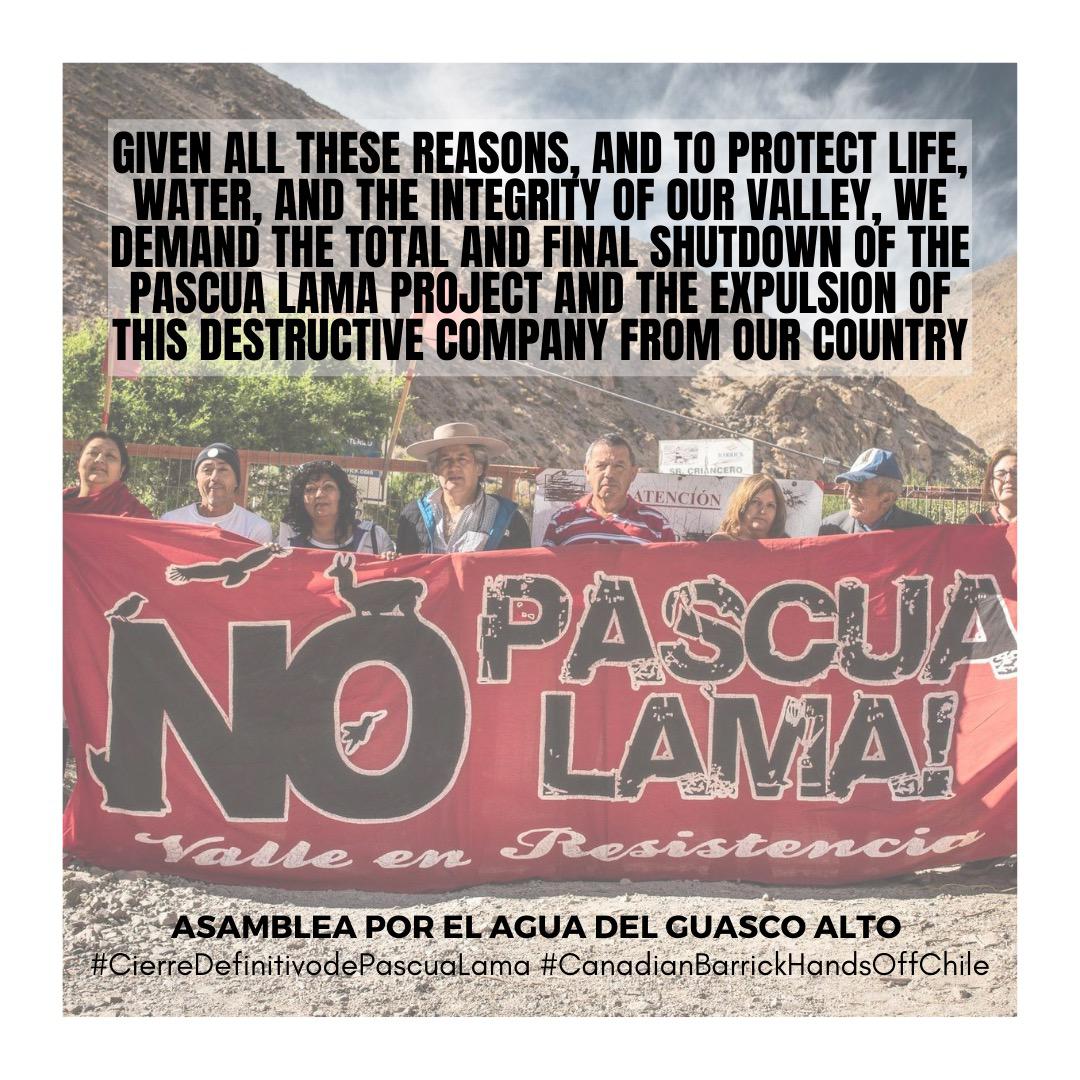