Bucaramanga, Bogotá, Washington, Ottawa. National and international civil society organizations are widely rejecting the decision made by the International Centre for Settlement of Investment Disputes (ICSID) on September 10 in the case of Eco Oro v. Colombia, for at least three reasons: we consider that (i) it is inconsistent and reflects a profound ignorance of the socio-environmental complexity of the case; (ii) it is the result of an unfair and widely discretionary investment arbitration system that allows for arbitrary decisions made by those who oversee these cases and, (iii) increases the risk of further arbitrations being brought against the State of Colombia at the ICSID.

ICSID is one of the institutions responsible for resolving disputes between States and international investors — in this case, within the context of the Canada-Colombia Free Trade Agreement. In the case of Eco Oro v. Colombia, the ICSID Tribunal concluded that, although the protection measures of the páramos adopted by Colombia were legitimate and did not constitute an expropriation of the rights of the Canadian company Eco Oro, its actions in the delimitation of the Páramo de Santurbán did violate the “minimum standard of treatment” to foreigners. The Tribunal has yet to decide on compensation for damages to Eco Oro and has asked both parties for more information to inform its decision.

The Tribunal’s decision was the result of a process initiated by a supranational arbitration claim filed by the Canadian company Eco Oro against Colombia in 2016, which questioned the decisions made by the Colombian government to protect the páramos — the natural source of water for 70% of inhabitants. The Canadian investor [Eco Oro] intends to construct the Angostura gold mine in the Santurbán páramo, located in the northeast of the country.

An inconsistent decision that ignores the socio-environmental complexities of the case. The majority of the Tribunal held that the decisions made by the Colombian government were in accordance with Colombian national law and were made with the legitimate aim of protecting the environment. In addition, the Tribunal recognized that the páramos are being threatened by both human intervention and climate change and that the possibility of their recovery from mining activities is very low, which is why it is necessary to protect them. As a result, the Tribunal rejected Eco Oro’s argument that the precautionary principle was not applicable, and pointed out that the Santurbán case was an example where it was, in fact, relevant.

This was the grounds for rejecting one of Eco Oro’s claims that its rights had been indirectly expropriated by the State of Colombia. On the contrary, the Tribunal found that the measures adopted by the country were a legitimate exercise in environmental protection.

However, when examining a second claim, the Tribunal explained that the inconsistency, hesitation and inaction of the State of Colombia in the delimitation of the Santurbán páramo had thwarted Eco Oro's investment expectations without any “apparent legitimate justification,” and had therefore not granted the investor "fair and equitable treatment" in accordance with the "minimum standard of treatment" for foreigners.

This last ruling of the Tribunal is inconsistent. It ignores the socio-environmental complexity of the case and the challenges of materializing the right to environmental participation within the process of delimitation of the páramo. Although the decision recognizes that the delimitation involves managing widely disparate interests throughout the process, in the end — in a ruling far removed from the reality of Santurbán and its communities — the Tribunal took this process lightly, dismissing its complexities, and appears to have not taken it as legitimate and sufficient justification.

An unpredictable, limiting and unfair arbitration system. "The Tribunal's decisions are not predictable, since decisions in one case do not bind future rulings on environmental issues.  There is no precedent set, as traditionally understood in the system. The breadth of the clauses and the arbitrators' freedom of interpretation are excessive, which is problematic not only for Colombia but for all countries in the region," said Yeny Rodriguez, a lawyer with the Interamerican Association for Environmental Defense (AIDA).

This decision allows mining investment to prevail over the Colombian State's obligation to protect the environment and the water of Colombians. We question the fact that the Tribunal has made its decision but has not judged the lack of due diligence by the Canadian company who knew from the beginning that its mining project overlapped with a páramo zone — a sensitive ecosystem protected by national law. This case demonstrates the arbitrary and overreaching nature of the supranational arbitration system, and the way in which it disciplines and punishes the governments of the Global South. It’s worth remembering that in February 2019, the Tribunal rejected the possible participation of the Santurbán Committee in the process.

Uncertainty for Colombia. Carla García Zendejas, Director of the People, Land and Resources Program of the Center for International Environmental Law (CIEL) stated, "The legal uncertainty that the supranational investment arbitration system represents for Colombia is enormous. The high levels of arbitrariness that characterizes the system leads to penalizing States for any circumstance in which expected profits are affected. And this is especially critical for Colombia, as there are other lawsuits against the country resulting from extractive projects linked to Santurbán and other fragile ecosystems. This could mean a domino effect of lawsuits and heavy penalties against Colombians."

Two other lawsuits are currently underway before ICSID against the country by Canadian mining companies — Red Eagle Exploration and Galway Gold — for measures taken to protect the Santurbán páramo. There are also other lawsuits filed by Cosigo Resources, South32 Investments Limited, Gran Colombia Gold, Glencore International and Anglo American in connection to other extractive projects.

We call on the Colombian State to denounce the free trade agreements and bilateral investment protection agreements to which it is party and to refrain from signing such instruments in the future.

It is for these reasons above that today the Comité para la Defensa del Agua y el Páramo de Santurbán (Committee for the Defense of Water and the Páramo of Santurbán) is holding a day of protest in front of the Canadian Embassy in Bogotá, demanding that ICSID respect their legitimate fight for the defense of water, Santurbán and the páramos of Colombia. Likewise, we are also in front of Congress, demanding that the Investment Protection Agreements with the United Arab Emirates-Minesa be rejected. 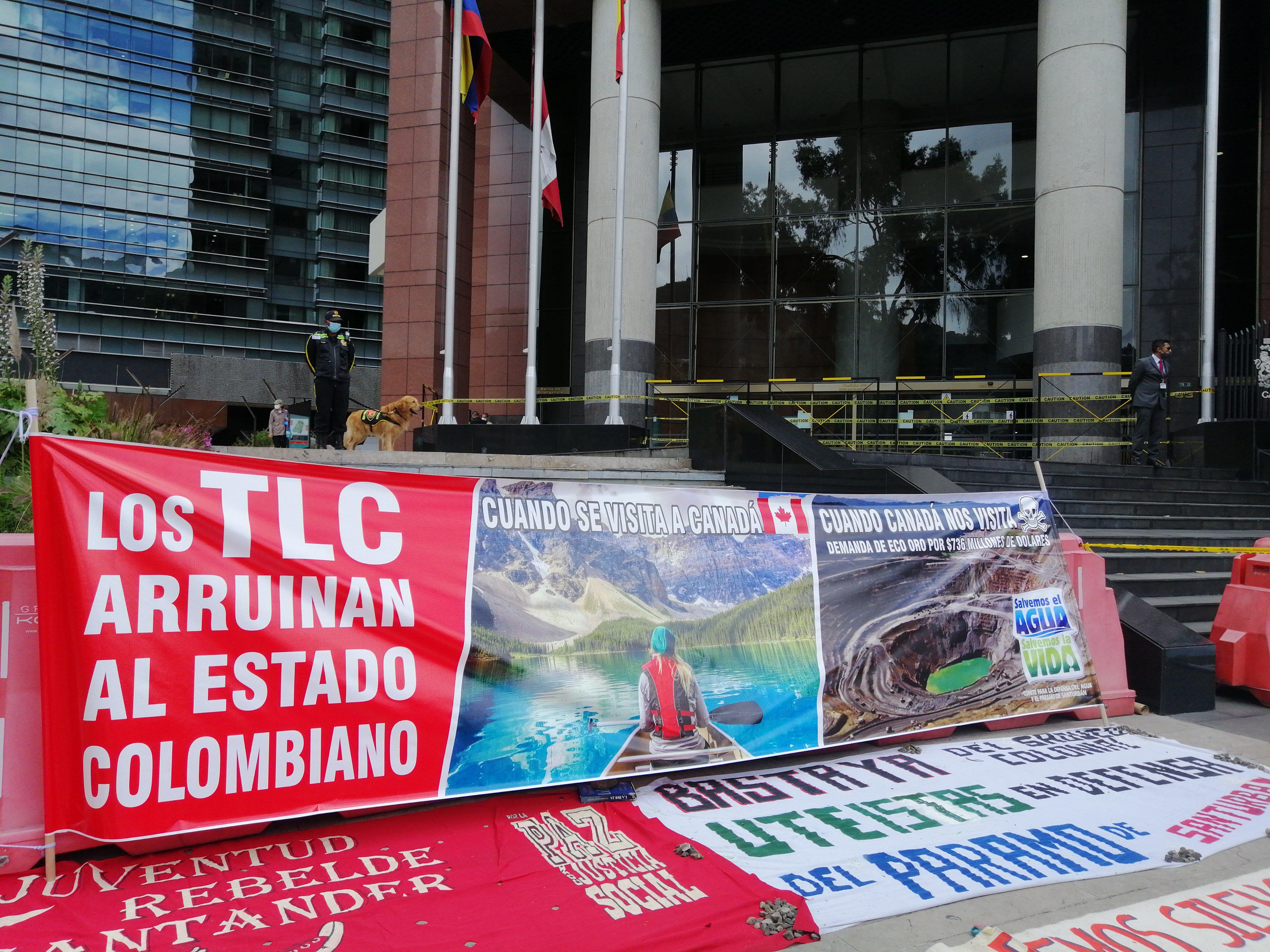