To the general public

To our sisters and brothers of Turtle Island

In the context of the “Oaxaca-Canada 2021 Indigenous Encounter” organized by the governments of Canada and Mexico from September 20—October 8 in the city of Oaxaca de Juárez, we have decided to make known some relevant issues that have been omitted or misrepresented in the official announcements and press conferences.

What they call the "State of Oaxaca" is one of the most culturally and linguistically diverse areas, thanks to Indigenous resistance in the face of extinction, beginning with European expansion into the territory now known as Mexico. This diversity, referenced by both the governments of Oaxaca and Canada, is presented as the main motivation for this event.

However, what they call “diversity” is much closer to Mexican nationalism, built on the bones and with the blood of our ancestors. We mention this primarily because governments see ‘Indigenous’ and ‘Afro’ as marketable cultural terms, as a discourse, as an image, etc.

We, who for generations have resisted their necropolitics, racism, classism, and sexism, not only refuse to encourage that nationalism, but we repudiate the commodification of our ways of life. We want all those unaware to know that for generations, we have witnessed the expulsion and marginalization of Indigenous people in the invaded territory that they have named Oaxaca. We have been the target of land invasions and dispossession. And we have watched, with sadness and rage, that same land become an object of financial speculation.

If we have something to share with our sisters and brothers of Turtle Island, it is this history of pain and colonial violence. They, too, were dispossessed, massacred, and forced to live on reservations. What they call "Canada" conceals beneath its soil thousands of bodies of Indigenous men, women, and children, murdered for the simple fact of not being white and not thinking like white people. Although the State tries to hide it, this violence endures and manifests itself in different ways.

This shared history of dispossession summons us, on this occasion, to say in unison to those who use their laws to justify or facilitate the extermination of Indigenous people and any possible form of life, to those who mistake our history of resistance with folklore, and to those who mask their business interests behind the expression of "cultural brotherhood," that WE WILL NOT ALLOW IT, either MATERIALLY OR SYMBOLICALLY.

WE DENOUNCE these same people for having been the intellectual perpetrators of the worst environmental and social tragedy that we have seen in recent times: the installation of mines for the massive extraction of minerals, through the exploration and implementation of mining projects and concessions.

Canadian companies have initiated hundreds of mining projects all over Latin America, many of them in Indigenous communities. Their attitude and treatment of the people in these communities has been racist and colonial.

According to data from the Observatory of Mining Conflicts in Latin America, 50% of the mining conflicts in Mexico are directly related to Canadian companies.  Data from the Comprehensive System on Mining Economics (El Sistema Integral sobre Economía Minera - SINEM) indicates that 160 of the 242 foreign companies with mining projects in the country are Canadian, and 74% of the concessions for mining exploration are granted to Canadian companies.

In the state of Oaxaca, the site of this so-called "cultural twinning," there are a total of 47 foreign capital mining projects, of which 33 are Canadian companies and three more involve a Canada-Australia partnership.

In the community of San José del Progreso, Ocotlán, the criminal company Fortuna Silver Mines operates under the name “Compañía Minera Cuzcatlán.” Having established itself in the area in 2009 through a 2000-officer-plus police operation, it has left the following: five people murdered, two of them anti-mining leaders and three members of the municipal authority; a spill on October 8, 2018 of 1,516,000 liters of toxic waste, a crime that remains in impunity; the contamination of the Coyote River in Magdalena Ocotlán, which is currently polluted with five chemicals in such high concentrations so as to make the water unviable for human or agricultural use. It should be noted that in nine years of production, Fortuna Silver Mines has extracted from the soil a wealth equivalent to $1,487,778,000 by exploiting gold and silver, while dividing the community, presenting misinformation, and exacerbating conflicts.

Another example of invasion and dispossession can be seen in the Chimalapas area, one of the great environmental lungs of the world. The Canadian company Minaurum Gold SA. has been awarded mining concession (titles 22 5472 and 24 6936), through which it has attempted to acquire more than 6,400 hectares for the exploitation of gold and copper. This jungle territory has been home to the Angpøn or Zoque people for centuries; today, a Canadian mining project puts their life, their millenary culture, and a vital ecosystem for regulating the climate at risk.

The case of Ixtepec is similar, where a Canadian mine intended to acquire 8,150 hectares to build an open-pit mine, without the slightest concern for the life and health of the Indigenous communities likely to be affected. This project has been temporarily halted after the concession was cancelled.

Since 2005, Capulálpam de Méndez—an Indigenous community in the Sierra Juárez—has continuously denounced the serious environmental harm caused by Cía Minera de Natividad y Anexas to its communal territory and natural resources. It is well known that this company operates as a front for Canadian companies, first serving Continuum Resource and then SUNDANCE. Its activities, carried out against the will of the people of Capulálpam, have caused serious environmental damage, and have led to the disappearance of 13 springs from tunnelling the subsoil.

Similarly, toxic waste and mine tailings are being dumped with impunity into the Río Grande, the main tributary of Papaloapam River. Numerous communities can no longer use the water, in violation of their universal right to access water. As such, we DENOUNCE that in 2015, a court injunction was filed against the mining concessions granted by the Ministry of the Economy without the consent of the community and without the prior, free and informed consultation to which we are entitled. However, the Ministry of the Economy challenged the ruling on the injunction, which had found in favour of the community. As a result, Minera de Natividad y Anexas continues to work without complying with the ruling, without permission from the community, and without having the authorization of an Environmental Impact Assessment—all with the full knowledge of the authorities in charge of enforcing environmental laws such as PROFEPA and CONAGUA.

It is a lie that they are seeking reconciliation with Indigenous peoples!

With this event, the Canadian and Mexican governments, by way of the Oaxacan government, seek to clean up their image regarding their colonial relationship with Indigenous and Afro communities. But they will not be able to divert our attention from the structural problems and the situations of dispossession and plunder to which they seek to subjugate us.

Finally, WE UNDERSCORE that we are on HIGH ALERT and attentive to this pretense of brotherhood. We know that their interests are and will always be their own. We will weave the bonds of affinity and reciprocity with the Indigenous people of Turtle Island, with the objective of broadening our resistance, until the prairies, the mountains, the rivers, and the animals are free again, until resistance allows us to live with dignity, free from this event imposed and created by those who are doubling their investments thanks to our extermination.

THERE CAN BE NO BROTHERHOOD WHERE THERE IS DISPOSSESSION AND PLUNDER!

WITHOUT GOLD AND SILVER, WE LIVE; WITHOUT WATER, NO! 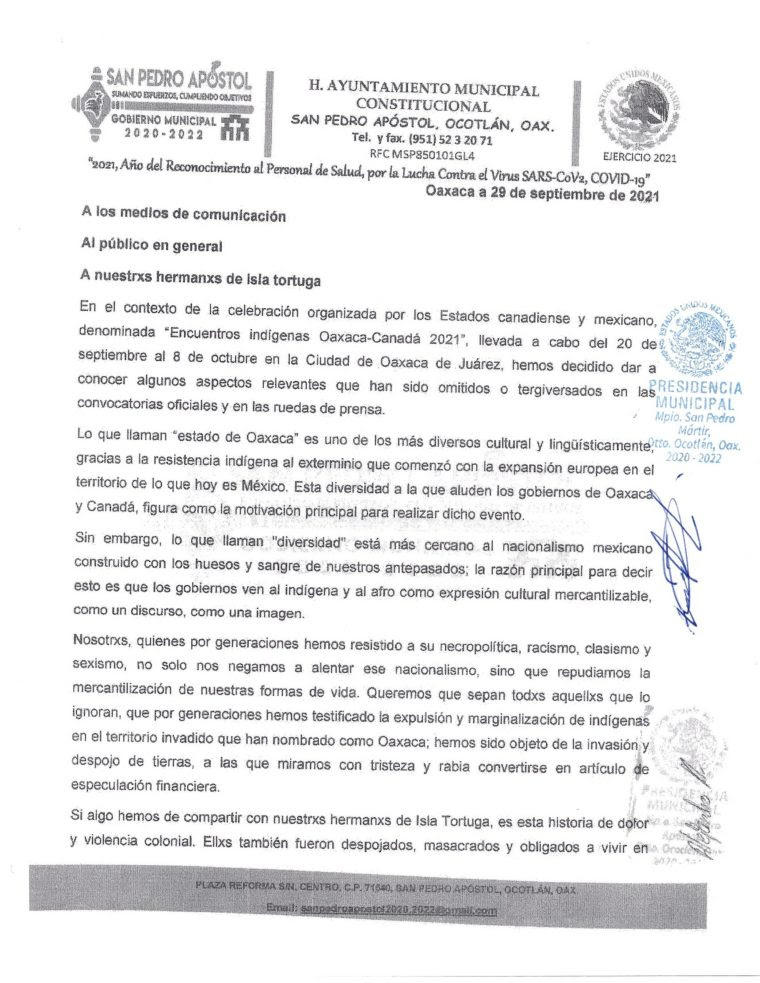