Today six U.S. and Canadian human rights and environmental organizations filed a letter with the Inter-American Commission on Human Rights (IACHR) supporting a request to extend precautionary measures for activists opposed to the Escobal mine in Guatemala. The mine has faced strong local opposition from the day it started operations in 2011, opposition that has met violent repression, threats and defamation campaigns. Tahoe Resources sold the Escobal mine to Pan American Silver in 2019, since which time the risks for activists have persisted and are intensifying.

The letter endorses the request submitted by Robert F. Kennedy Human Rights and the Guatemalan Human Rights Ombudsman’s Office regarding the insecurity facing communities and activists that oppose the Escobal mine. It asks the IACHR to monitor the security situation of communities in resistance and Indigenous Xinka leaders who are participating in the consultation process; to extend precautionary measures for leaders Julio David González Arango, Juan Eduardo Donis, Pablo Adolfo Valenzuela Lima, Edwin Alexander Reynoso Bran, and Luis Fernando García Monroy; and to request request information from the Guatemalan government regarding risks to activists and measures being taken to ensure their safety.

Since 2011, Xinka and campesino communities have organized to peacefully oppose the mine in southeastern Guatemala. Nearly 100 people were criminally charged for their role in the opposition, all eventually acquitted for lack of evidence. Today the mine is closed, pending consultation with the Xinka people as ordered by the country’s highest court in September 2018.

For two years, the Xinka people were excluded from participation in the consultation and denounced illegalities and discrimination in the process. In October 2020, the Xinka came to an agreement with the government regarding the participation of their elected representatives and the start of the pre-consultation phase. The security situation has deteriorated since then. Gunmen shot and seriously injured community leader, Julio González, in January. The Xinka Parliament’s lawyer and other Xinka representatives participating in the consultation process regularly receive death threats. Recent nationwide protests over government corruption and the co-optation of the courts underscore the lack of institutional protections for Xinka defenders and absence of an independent backstop to address illegalities in the consultation process (the letter contains a detailed historical summary).

Although Pan American Silver is a larger and more diversified mining company than Tahoe Resources, the Escobal mine remains an important asset for the company. With 14 mining projects that have established mineral reserves, Escobal represents 40% of Pan American Silver’s silver reserves, which it calls a “catalyst” for business growth.

Pan American Silver has expressed its intention to reopen the mine following the consultation process, revealing a clear lack of respect for Xinka people’s self-determination and their right to free, prior and informed consent, enshrined in international law.

The letter may be downloaded here. 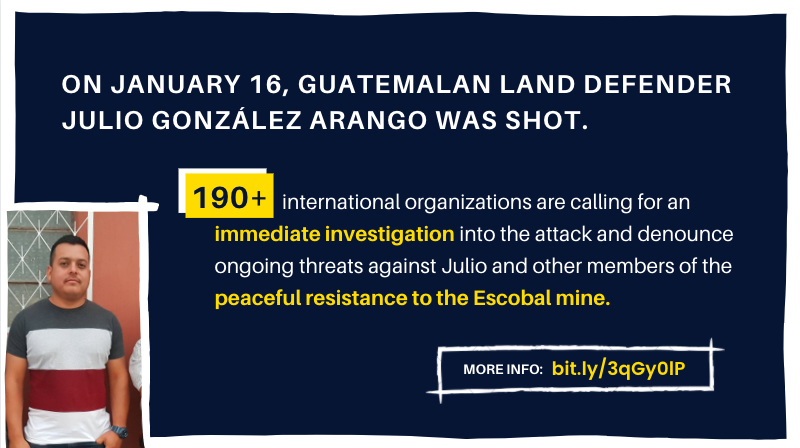