Dispossession in Collusion with the Government of Guanajuato, Mexico

The government of the state of Guanajuato, through its Ministry of Education, has joined the Canadian company Argonaut Gold, in its persistent attempt to deceive communities near the Cerro del Gallo mining project, in Dolores Hidalgo.

On September 16, it was announced in some local media that Monserrat Bataller Sala, regional delegate of the Ministry of Education of Guanajuato and Lourdes Macpherson, manager of corporate affairs and communication of Argonaut Gold México, held an event set for the delivery of backpacks and school supplies to telesecundaria school 892 students in the Community of San Antón de las Minas.

Previously, on July 13, Governor Diego Sinhue Rodríguez Vallejo, met with executives of the mining Argonaut Gold company, to welcome its projects in the State of Guanajuato, despite the fact that the project still does not have the necessary permits to operate.

The "friendly face" of dispossession

Among the strategies that mining companies use to get closer to the communities, is the use of programs with a “social friendly face”, such as the one promoted by "Argonaut Gold Becarios" (Scholarship recipients) who, taking advantage of the inability of the State to guarantee the right to education, it offers "Progress, development and better opportunities" to the inhabitants, although in reality only a few people would be able to integrate into this economic activity, but only as cheap labor, while the rest of the population would watch the destruction of their environment and their community life.

It is not surprising that both the mining company and the government use the well-known non-binding standards of “corporate social responsibility” to make the population believe that mining is a harmless activity, when in fact it is the opposite because, of all the extractive activities that are destroying the planet, mining is undoubtedly the one that generates the greatest damage. It is common for them to use this framework of self-constructed standards to disguise and hide the dispossession and displacement that will cause this extractivism with a "friendly face”.

Mining companies are experts in taking advantage of local governments' needs such as Guanajuato’s inability to implement appropriate environmental and cultural alternatives, not only for the most vulnerable families, but for the population in general.

Mining companies, such as Argonaut Gold, seek to cover up the danger posed by "open pit mining” by trying to influence the perception of the mothers of families at  the communities, precisely because they are the ones who regularly take care of education and care of children. It is regrettable that the government of Guanajuato, who should be the guarantor of all human rights, supports this economic system that is based on accumulation by dispossession, thus responding to the demands of the model patriarchal, capitalist and colonial, that is so accentuated in this region of the country.

We have no doubt that if the Cerro del Gallo mining project comes into operation, an irreversible and unprecedented socio-environmental catastrophe will be generated in the region, as we have seen, experienced and documented in many parts of Mexico and Latin America.

We have had enough of politicians and representatives who only see investments as the only way out of their failures as governing authorities.

The Argonaut Gold mining project is located in Cerro del Gallo, in Dolores Hidalgo, within the “Independence Basin”, a territory in which water is scarce, the overexploitation of its underground aquifer is alarming and the hydrological balance was broken decades ago.

Despite this, there are immense water concessions monopolized by large companies in the agro-export sector, as well as in the industrial sector. It is not by chance that the severe exhaustion of the underground basin is forcing the extraction of water from about 600 meters deep, which means that people are consuming water with excess elements such as arsenic and fluoride and other metalloids, highly harmful to human health.

If realized, the Cerro del Gallo project would damage local communities in multiple ways just as it happens in all communities where there is an “open pit mining”.

Added to the damage caused by pollution is the disappearance of water sources due to depletion and hoarding by mining activity, causing insufficient water for human consumption in the communities.

The opening of a mine implies an absolute violation of all human rights as we know them. It begins with dispossession and ends with forced / involuntary displacement of the inhabitants before the impossibility of maintaining or building a dignified life. 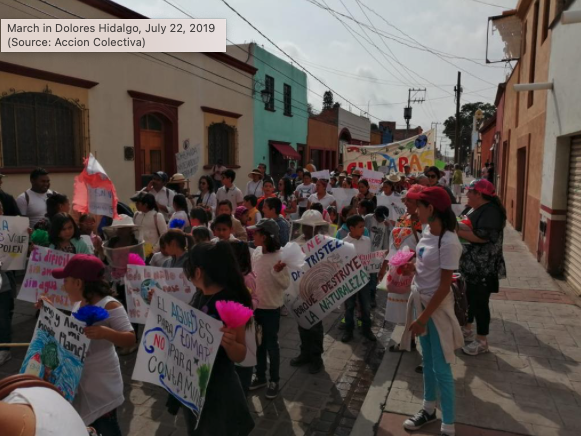