Brazilians Still Without Water Six Months after Mine Dam Breach

Residents of Aurizona say the Canadian mining company has failed to deliver on its promises. In addition to the inadequate water supply, the community denounces the company's attempt to criminalize local leaders.

Today marks six months without reliable access to clean water for more than 4,000 people of the community of Aurizona, downstream from a gold mine in the Brazilian Amazon. The community located in the municipality of Godofredo Viana, Maranhão, Brazil has been without access to a regular and adequate water supply since March 25 due to the failure of a dam at the Mineração Aurizona S.A. (MASA) gold mine, owned by the Canadian mining company Equinox Gold.

Community members have reported muddy, discolored, strong-smelling water coming from their taps since the dam failure. The Brazilian National Mining Agency (ANM in Portuguese) reports that the discharge, which contained sediment and rainwater collected for use in mineral processing, flowed downstream into drinking water reservoirs. The community has repeatedly asked in vain for water quality studies from the company and the government and has recently taken it upon themselves to do their own. The Movement of People Affected by Dams (MAB in Portuguese) and research centers located at the Universities of Maranhão and Minas Gerais carried out their own studies in September, whose results should be released soon.

The company claims to have addressed the lack of access to water by “helping the local community clean up their water, build a water treatment plant, provide [sic] drinking water.” The community of Aurizona, however, disagrees. According to locals, tap water arrives intermittently and the additional water distributed by trucks is from a reservoir contaminated by the March spill. Additionally, not all houses are receiving water. Many community members must travel to find water. Community members complain of skin irritation and stomach problems as a result of using the water provided.

“They say they are drinking the same water we do, but this can’t be true or they would be dealing with the same health problems we are,” said Maria Valdirene Teixeira.

MASA and its parent company Equinox Gold have repeatedly stated that the cause of the dam breach in March was “exceptionally heavy rain (more than 450 mm), described as a 1-in-10,000-years rain event.” However, an independent review of meteorological data from Brazil conducted by Dr. Steven Emerman in July found that “no location on the Atlantic coast of the state of Maranhão received more than 150 mm of rainfall over March 24-28,” which are normal rainfall levels for the region. The review by Dr. Emerman concluded that “the root cause of the failure should be regarded as systematic neglect.”

“What causes the most indignation is that the company continues to deny that there was a dam failure.  It wasn’t the principal tailings dam, but instead the Lago de Pirocaua, which is, in fact, a mining dam according to the ANM,'' according to Dalila Calisto of MAB.

After several meetings between company’s representatives, governmental authorities and affected community members, as well as peaceful demonstrations by affected families, the situation has not changed. Instead, the company has managed to obtain a judicial decision preventing protesters from blocking local roads, and has filed a lawsuit targeting five local organizers.

“Nobody is happy to be here protesting,” said Juciara Pereira Lima, member of the Committee of People Affected by the Aurizona Mine. “We have had to do it because our situation is unbearable.”

MASA had not previously reported this dam to the national dam registry, as required by Brazilian authorities, and has since been ordered to stop using the dam. According to ANM documents, there is no emergency action plan for the dam nor does the company regularly  submit inspection and monitoring reports.

“It is unacceptable that six months after this dam failure the company has not met the community’s demands of clean water, nor provided access to independent information on water quality. Instead, Equinox Gold directs its efforts at criminalizing people who are fighting for their rights,” said Rosa Peralta from the Comité pour les droits humains en Amérique latine (CDHAL). 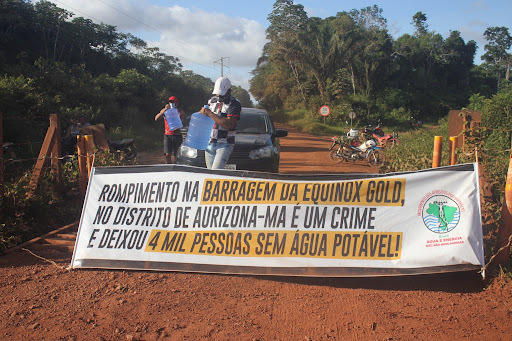 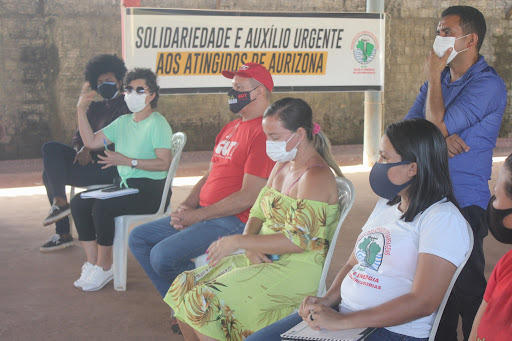