A new mine could position Quebec as a lithium leader, but its rocky past worries locals

It could be a boon for a small community, but critics brace for impact after history of failures and spills 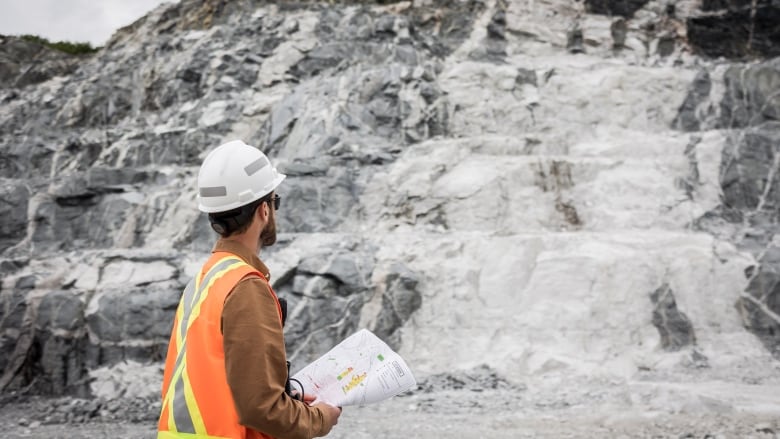 If it opens on time next March, the La Corne, Que., mine will be one of the only functional lithium mines in North America. (Sayona Québec)

In an expansive open-air pit 550 kilometres northwest of Montreal, 100-tonne trucks criss-cross the climbing roads, preparing for the mine to open.

The chalk-white veins of those rocks have metals inside, including one of the most sought-after minerals in the world: lithium, a key component of electric car batteries.

When production restarts at the La Corne, Que., lithium mine early next year, it is set to be one of the only functional lithium concentrate mines in North America and position Quebec as a Canadian lithium leader.

Sayona Quebec, which purchased the mine in 2021, has already hired about 80 full-time workers, and the mayor of the neighbouring municipality, Amos, says there will surely be secondary economic benefits for residents.

"As a Quebecer, I'm proud," Sayona Quebec CEO Guy Laliberté said. "Knowing that this lithium (will have been) produced with green energy, hydropower … in some very severe and strict environmental regulations."

But others are more skeptical. In the past 10 years, the lithium mine has changed owners four times, has been responsible for serious and damaging spills, and filed for creditor protection twice — despite a $110-million investment from the provincial government.

Meanwhile, environmental groups and members of the Long Point First Nation have spoken out about Sayona's other proposed lithium projects in the region, saying the projects could threaten the water, as well as the Anishinabeg way of life.

That's why some experts say that while extracting lithium is important, it shouldn't be thought of as a climate change magic bullet just because it powers the electric vehicle industry.

"There is a lot of harm associated with extraction, both for communities and for ecosystems," said Teresa Kramarz, a mining expert at the University of Toronto.

Several kilometers outside of Val-d'Or — a town in the Abitibi-Témiscamingue region so mineral-rich, the name actually translates to "the golden valley" — Rodrigue Turgeon points to an empty field, but for some water and blue-grey sludge.

That sludge — mining tailings from an old gold mine — looks unnatural even in the browning decay of November.

Turgeon, a spokesperson for the group MiningWatch Canada, is calling on Canadians to see the tailings and understand that more lithium means more mines. He wants Canadians to question whether it's a good idea to replace extracting one resource — gasoline — with another resource — lithium.

"It's important to acknowledge the extent of areas we've been polluting for centuries in Quebec's history to encourage this polluting industry that's only pursuing its own profit," he said.

Turgeon said citizens ought to resist the idea that lithium will save the environment, and instead change their consumption habits.

"It's a shift from one kind of pollution to another. We have to really start doing everything in our power to reduce our consumption rate," he said.

Teresa Kramarz, the University of Toronto mining expert, says that in addition to mining, there needs to be serious conversations in Canada and abroad about more sustainable forms of transportation, including increased public transit.

"Everyone buying electric cars and everybody having a Tesla in their driveway, I don't think that's sustainable… it's neither just nor sustainable.