Barrick Slapped with Third Lawsuit on Same Human Rights Abuses at Tanzanian Mine: ‘Business as Usual’?

(Ottawa) For the third time in under ten years, victims of ongoing police violence at Barrick Gold’s North Mara Gold Mine are seeking legal remedy - this time in Canada. Today, Vancouver-based law firm CFM filed suit in an Ontario court on behalf of Indigenous Kuria plaintiffs whose communities surround the mine’s pits and waste dumps.

For well over a decade Kuria men, women, and children have been subjected to excess use of force by private mine security and police providing security services to the mine. The violence villagers endure, including beatings, killings, and rapes, often occurs on mine property, but also takes place in the surrounding villages, as was the case in March this year for a young husband and father, allegedly killed as a bystander in his village by police contracted by the mine.

MiningWatch has travelled regularly to North Mara since 2014 to interview victims of violence by mine security and by police paid to provide security to the mine, gathering data on some hundred cases to expose the ongoing atrocities.

“Even as a lawsuit launched against Barrick Tz Limited in 2020 is still ongoing in the U.K., violence and killings at the mine have continued,” says Catherine Coumans, Co-manager of MiningWatch Canada. “It is incomprehensible that this level of violence against local Kuria is allowed to continue as if it were business as usual.”

A first lawsuit was filed by the firm Leigh Day in 2013 on behalf of victims of excess use of force by police contracted to the mine leading to deaths and injuries. This case was against Barrick’s then-subsidiaries, U.K.-based African Barrick Gold plc. and the North Mara Gold Mine ltd. The case was settled out of court in 2015 benefitting 13 villagers. A second lawsuit was filed in 2020 by the firm Hugh James against Barrick Tz Limited, formerly known as Acacia Mining. This case initially included seven Kuria victims of mine security and police contracted to provide security to the mine who suffered alleged injuries and deaths. MiningWatch Canada assisted some of these plaintiffs and continues to support this ongoing lawsuit.

In September 2019, Barrick Gold purchased the shares of minority shareholders in Acacia Mining in a $1.2bn buy-out and the company has since had direct management control of the North Mara Gold Mine.

MiningWatch conducted a human rights field assessment in North Mara in September 2022 and found that levels of alleged violence against local Kuria by police contracted to the mine have remained very high over the three years since Barrick took over control of the North Mara Gold Mine.

“The lives of young brothers, sons, and husbands have been cut short due to excessive force used by police guarding the mine,” says Coumans. “In some cases, the victims are attacked from behind as they try to flee the area, in other cases they are bystanders caught up in police chases.”

In MiningWatch’s field research in September, we also documented cases of Kuria from the village of Komarera who are being forcibly evicted from their land to make way for mine expansion in an intimidating process that they report as being inequitable and violent, and that may be unlawful.

Photo: March 18, 2022 - Member of Parliament for Tarime Vijijin, Mwita Mwikwabe Waitara, speaks at the funeral of a husband and father allegedly killed in his village by police providing security to the North Mara Gold Mine: “the one lying here is not here because he got sick, but because he was murdered.” 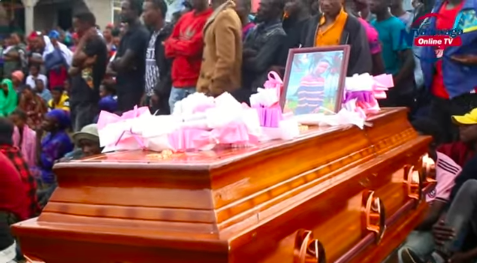