(Val-d'Or, Quebec) Five regional and national organizations are joining forces to ask the Minister of Energy and Natural Resources to withdraw all 5161 mining claims covering all or part of the eskers in the Abitibi-Témiscamingue region and to immediately withdraw mining activities on eskers that are not currently claimed. An official letter to this effect with a 30-day deadline was sent to the Minister this morning by representatives of Québec Meilleure Mine, Eau Secours, Action boréale, Regroupement vigilance mines de l'Abitibi et du Témiscamingue (Revimat) and MiningWatch Canada.

This request is based on sections 82 and 304 of the Mining Act, which allows the Minister to withdraw mining titles in order to prevent prospecting, research, exploration and mining activities for utility purposes and the public interest. Eskers are unique geological structures that owe their formation to the ice ages and a particular pattern of sedimentation. The eskers of Abitibi-Témiscamingue are also known for their ability to filter, retain and store the water that flows through them, and are particularly likely to harbour a rich biodiversity including endemic species. Due to their highly porous nature, eskers are fragile and susceptible to groundwater contamination across large distances.

According to the Quebec Ministry of the Environment's Ecological Reference Framework, the region of the Abitibi lowlands has a serious deficit of protected areas (8.41%) — far from the international and Quebec targets of 17% per natural province by 2020, and the goal of 30% by 2030. A major impediment to achieving these goals is the fact that the region is largely covered by mining claims.

This joint request comes on the eve of the 2022 Esker forum organized by the Société de l'eau souterraine Abitibi-Témiscamingue, which will be held on May 26 and 27, 2022 at the Val-d'Or campus of the Université du Québec en Abitibi-Témiscamingue. The forum will include participation by the signatories.

“5161 mining claims may sound like a lot, but it is a small number in the context of the region’s 28,000-plus claims. It’s the minimum needed to repair a historical oversight. We must protect these eskers which are fragile and in many ways, one of a kind in the world.” — Rodrigue Turgeon, lawyer, co-spokesperson for Québec meilleure mine Coalition and National Program Co-Lead with MiningWatch Canada

“As unique and vital as the eskers are, they are unfortunately subject to mining claims in every corner of the region. It’s high time to reverse this trend and stop this threat to the quality of our groundwater for generations to come.” — Rébecca Pétrin, executive director for Eau Secours

"De-claiming the region’s eskers is about much more than protecting the world’s best sources of drinking water. It’s also about opening the door to creating protected areas that will help safeguard plant and animal species who depend on these unique ecosystems.” — Henri Jacob, President of Action Boréale

"The eskers are the pride and identity of the people of Abitibi-Témiscamingue. It is unquestionably in our public interest to protect them.” — Marc Nantel, spokesperson for Revimat

Data on eskers and mining titles in Abitibi-Témiscamingue:

Letter sent to the Energy and Natural Resources minister. 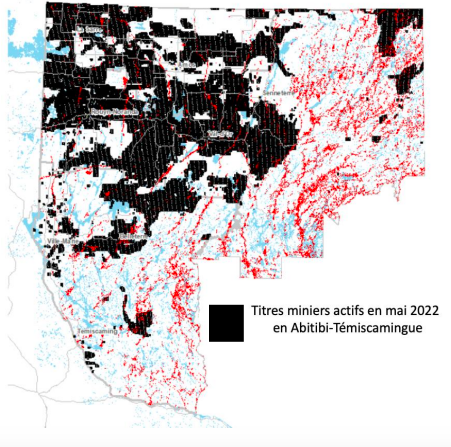